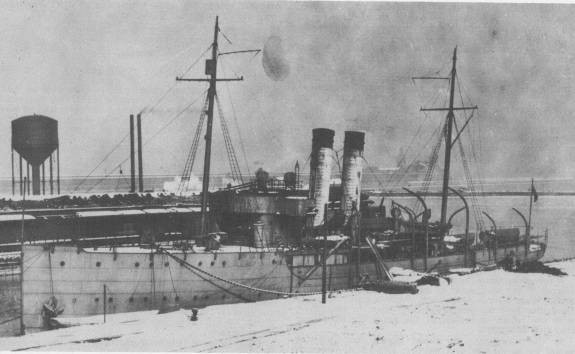 A residential village in Cook County, III., some 15 miles north of Chicago.

Eastland, a twin-screw steamer constructed in 1903 by Jenks Shipbuilding Co. at Port Huron, Mich., was acquired by the Navy on 21 November 1917 from the Central Trust Co. of Illinois; converted to a gunboat; renamed Wilmette on 20 February 1918; and commissioned on 20 September 1918, Capt. William B. Wells in command.

Commissioned late in World War I, Wilmette saw no combat service. She trained sailors and engaged in normal upkeep and repairs until placed in ordinary at Chicago, Ill., on 9 July 1919, retaining a 10-man caretaker crew on board. On 29 June 1920, the gunboat was returned to full commission, Capt. Edward A. Evers, USNRF, in command.

For the remainder of her 25-year career, the gunboat served as a training ship for naval reservists in the 9th, 10th, and 11th Naval Districts. She made voyages along the shores of the Great Lakes carrying trainees assigned to her from the Great Lakes Naval Station in Illinois. Not long after her second commissioning, the gunboat participated in the gunfire sinking of the former German submarine UC-97 on Lake Michigan. Wilmette remained in commission, carrying out her reserve training mission until she was placed "out of commission, in service," on 15 February 1940.

Designated IX-29 on 17 February 1941, she resumed training duty at Chicago on 30 March 1942, preparing armed guard crews for duty manning the guns on armed merchantmen. That assignment continued until the end of World War II in Europe obviated measures to protect transatlantic merchant shipping from German U-boats. On 9 April 1945, she was returned to full commission for a brief interval. Wilmette was decommissioned on 28 November 1945, and her name was struck from the Navy list on 19 December 1945. Almost a year later, on 31 October 1946, she was sold to the Hyman Michaels Co. for scrapping.