Westpac Express (T-HSV-4676) was completed in 2001 at Henderson, Western Australia, by Austal, Ltd. 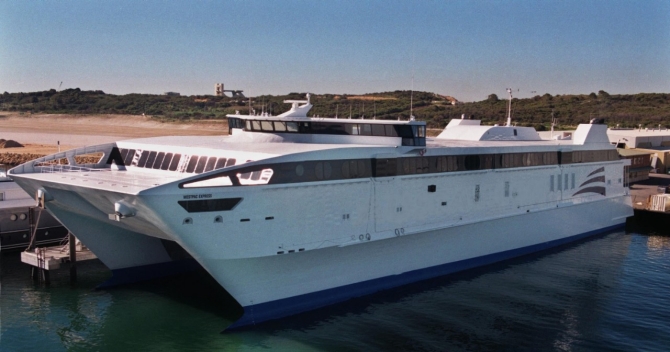 This photograph of Westpac Express captures her strong yet sleek lines, and her ability to transport large numbers of troops at high speed. (Unattributed or dated U.S. Navy photograph, Ship Inventory, MSC)

Westpac Express is capable of sustaining loaded speeds of 35 knots, and can rapidly deploy most of a marine battalion -- up to 970 marines plus vehicles and equipment -- in a single lift. The Military Sealift Command (MSC) first chartered her to operate with the III Marine Expeditionary Force (MEF) in July 2001 for a ‘proof of concept’ period, subsequently extending the charter. Originally described as a “theatre support vessel,” the MSC gradually shifted her role and now more commonly refers to Westpac Express as a “high speed connector.”

“Instead of a two week process to deploy by air lift,” CW05 Roger G. Rose, Surface Embarkation Officer, III MEF G-4, Strategic Mobility Office, evaluated one such deployment in 2006, “Westpac Express moved the unit’s 843 marines, 63 vehicles, and 27 containers of baggage and cargo in 30 hours. Instead of a price-tag of over $500,000 for one-way transportation requiring at least 16, C-17 airlifts, Westpac Express did the round trip lift for $130,000.”

A magnitude 9.0 (Mw) undersea megathrust earthquake occurred off the Tōhoku region of Honshū, Japan, at 1446 on 11 March 2011. The earthquake triggered tsunami waves that reached more than 100 feet in height at places, and caused nearly 25,000 casualties, including more than 15,000 killed. The United States initiated Operation Tomodachi, from the Japanese Tomodachi Sakusen [—Operation Friend(s)] to provide humanitarian relief to the victims. A total of 24,000 U.S. servicemembers, 189 aircraft, and 24 ships served in Tomodachi (12 March–4 May 2011), including Westpac Express.