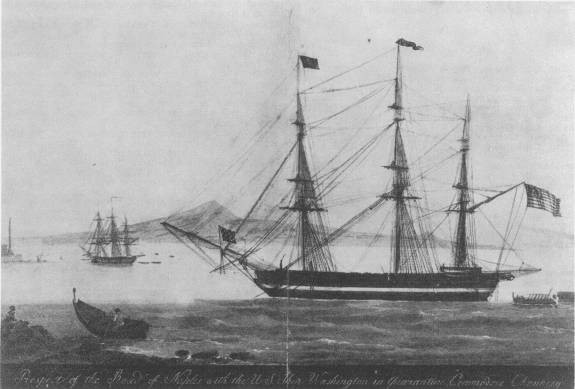 Caption: The ship-of-the-line Washington in the Bay of Naples as Commodore Chauncey's flagship, with his broad pendant flying at the main. This artist's rendition depicts Washington in an unusual color scheme, with a single white or yellow streak between the upper and lower gun decks.

Washington, the 42d state, was admitted to the Union on 11 November 1889. The first six Washingtons were named for George Washington; the seventh and eighth, for Washington state.

The first Washington, while never part of the Continental Navy, was a 160-ton schooner named Endeavor acquired by General George Washington in early October of 1775 from George Erving and Capt. Benjamin Wormwell of Plymouth, Mass. Renamed Washington, the schooner was fitted out at Plymouth and was re-rigged as a brigantine at the behest of her prospective commanding officer, a Continental Army officer from Rhode Island, Capt. Sion Martindale. On 3 November 1775, Washington's charter was consummated, and she was authorized to operate off the New England coast between Cape Cod and Cape Ann in the hope of disrupting British shipping.

Washington sailed in company with the schooner Harrison on 23 November. No more than three leagues from shore, both Continental ships came across the British frigate HMS Tartar and two forage-laden transports. The British ships scared off and separatedWashington and Harrison and chased the former until well after nightfall.

Although Washington spent most of 25 November looking for Harrison, she did not find her. Soon thereafter, she captured the provision-laden, 80-ton sloop Britannia and turned her over to Continental authorities before returning to sea on the 28th. However, stormy weather and a poorly disciplined crew caused Washington to head back to port the next day. Back at Plymouth, it was ascertained that some of the men's grumblings had been occasioned by their contention that they had enlisted to serve in the army-not as sailors. Moreover, a lack of winter clothing demoralized the crew. They were quickly supplied with suitable winter outfits, and the ship returned to sea on Sunday, 3 December 1775. Late the next day, the British 6th rate, 20-gun frigate HMS Fowey, cruising Massachusetts Bay on the lookout for "rebel cruisers," in company with HMS Lively, sighted Washington and gave chase.

Just before nightfall, Fowey reached gun range and fired a warning shot. Seven subsequent rounds brought the brigantine to, and she lowered her colors. Taken to Boston, Washington, upon inspection by the Royal Navy, was deemed unsuitable for operations on the high seas; she eventually rotted away at Boston.