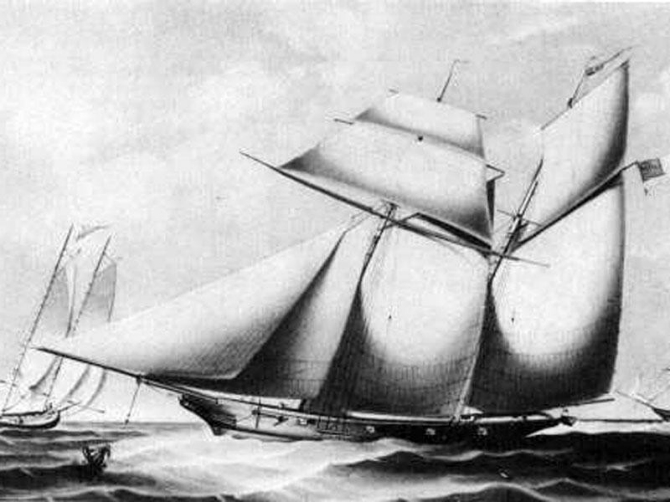 The first Wanderer, a schooner-rigged yacht built in 1857 in the shipyard of Joseph Rowland at Setauket, Long Island, N.Y., by Thomas B. Hawkins, was originally owned by Col. John Johnson of New York City and Louisiana. After a cruise down the Atlantic coast and to the Gulf of Mexico in which she visited Charleston, S.C.; Brunswick, Ga.; Key West, Fla.; and New Orleans, Wanderer returned to New York where she was soon sold to William C. Corrie of Charleston, S.C. Her new owner had several alterations made to the ship, some of which-particularly the installation of tanks which could hold 15,000 gallons of fresh water, suggested that Wanderer was being fitted out as a slave ship. As she was attempting to leave New York harbor, she was seized as a suspected slaver on 9 June 1858 by the steam revenue cutter Harriet Lane and towed back to Manhattan Island and anchored near the battery. The next morning, Federal officials inspected the schooner and found that, while her extremely fast lines and her equipment and provisions would be valuable assets should she enter the "black gold" trade, there was no conclusive evidence of evil intent on the part of her owner, her master, or crew.

The yacht was thus free to clear port, and she sailed for Charleston where she arrived on 25 June. There, her fitting out as a slave ship was completed before she got underway for Port of Spain, Trinidad, on 3 July. After a pleasant visit, she left that port on the 27th, crossed the Atlantic, and entered the Congo River on 16 September. Braving an epidemic of yellow fever which was then raging in the Congo, she took on board some 500 blacks and sailed for North America on 18 October. She was briefly chased by USS Vincennes as she left the mouth of the river but quickly outdistanced her American pursuer. At the end of a six-week voyage in which many of the captives died, Wanderer arrived at Jekyll Island on 28 November and delivered her human cargo.

Word of Wanderer's arrival quickly spread, and a great deal of litigation ensued, both civil and criminal, but resulted in no convictions. During the next two years, ownership of the vessel changed several times and, on one occasion, the ship was stolen and taken to sea on a piratical and slaving voyage. Near the coast of Africa, the first mate led a mutiny and left the pirate captain at sea in a small boat before bringing the ship back to Boston on Christmas Eve 1859 and turning her over to authorities there.

A week before the outbreak of the Civil War, Wanderer arrived in Key West, Fla., from Havana, Cuba, under Southern registry on 5 April 1861. She was caught in that port during the bombardment of Ft. Sumter on 12 April 1861 and confiscated in May 1861 to prevent her from being used by the Confederacy as a privateer. Operating out of Key West from 27 June, she carried wood, coal, water, and mail to the vessels of the Gulf Blockading Squadron. On 30 November, she stopped the British schooner Telegraph off Key Vaccas, Fla. Upon examination of that vessel's papers, Wanderer released the British schooner, but the incident nevertheless prompted a diplomatic protest from the British on 8 March 1862.

When Union naval forces were divided on 20 January 1862, Wanderer was assigned to the newly formed East Gulf Blockading Squadron. She continued provisioning and dispatch duties, operating between Tortugas, Fla., and Havana and Cape San Antonio, Cuba. In early July 1862, Wanderer patrolled off Indian River and Jupiter Inlet, Fla., in search of possible blockade running activity but found none. In October 1862, she was assigned to the blockade of St. Andrew Bay, Fla. She had returned to Key West by 1 January 1863 for re-coppering and cruised between Saint Marks and Cedar Keys, Fla., in early March. Accompanied by Ezilda, she captured the sloop Ranger off Cedar Keys on 25 March. Wanderer also captured the schooner Annie B. and her cargo of cotton on 17 April 1863 off Egmont Key, Fla. On 30 April, Wanderer proceeded to Key West for extensive repairs to her hull and spars.

Meanwhile, legal action against the ship was slowly taking place in the North; and the schooner was condemned by the Philadelphia prize court in May 1863 and was simultaneously purchased by the Union Navy.

Wanderer left Key West early in May for patrol duty west of Tortugas. She stopped in Tampa Bay, Fla., in June and had returned to Key West by 15 July for refit as a hospital ship. She remained in ordinary through the fall and winter undergoing alterations to prepare her for this new role, and she was ready in the spring. However, hot and humid weather brought an epidemic of yellow fever to Key West during June and July 1864. All crewmen on board Wanderer sickened, and one died. The vessel spent the remaining months of 1864 at Key West as a guard ship.

Wanderer deteriorated rapidly during her relative inactivity. On 1 June 1865, shortly after the end of hostilities, Rear Admiral Cornelius K. Stribling, commanding the East Gulf Blockading Squadron, advised that Wanderer not be sent north for disposal because of her unseaworthy condition. She was sold at public auction on 28 June 1865, at Key West, by A. Patterson to Packer & Watson. She subsequently entered the banana trade and operated in mercantile service until lost off Cape Maisi, Cuba, on 21 January 1871.