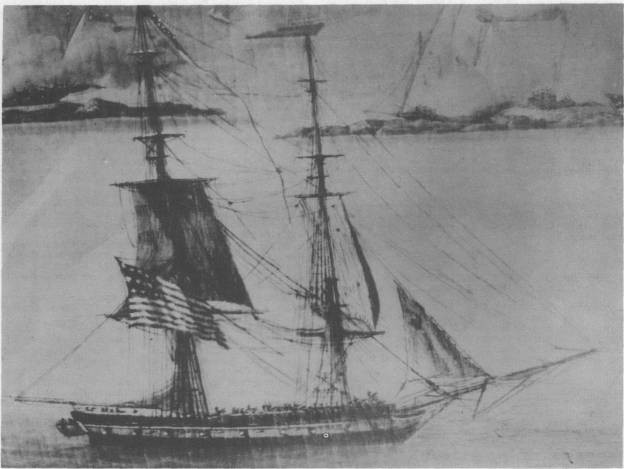 Caption: An early artist's rendition of USS Vixen after she was rerigged as a brig in 1804.

The first Vixen, one of four vessels authorized by Congress on 28 February 1803, was built at Baltimore, Md., in the spring of 1803; and launched on 25 June, Lt. John Smith in command.

Designed especially for operations in the shoal waters off the coast of Tripoli, Vixen joined Commodore Edward Treble's squadron for duty in the Tripolitan War of 1801 to 1805 immediately upon her commissioning. She sailed from Baltimore on 3 August and deployed with the squadron off Gibraltar on 14 September. Commodore Preble dispatched Vixen and the frigate Philadelphia to Tripoli in October 1803 to establish the blockade there. However, Vixen soon departed in search of two Tripolitan warships and was not present when Philadelphia grounded and was captured on the 31st. Instead, she carried the dispatches announcing the loss of the frigate and the imprisonment of Capt. William Bainbridge, his officers, and crew back to Gibraltar in December.

Retribution for this latest, and by far most brazen outrage in a long series of depredations by the Tripoli pirates came swiftly and dramatically. Lt. Stephen Decatur, Jr., boarded and destroyed Philadelphia where she lay in Tripoli harbor on 16 February 1804, and Commodore Preble later followed this up with five heavy bombardments of the pirate state on 3, 7, 24, and 29 August, and on 3 September. Vixen participated in all these actions, and performed valuable tactical service by helping to coordinate the movements of the various American vessels. She was rerigged as a brig in September 1804, ostensibly to improve her sailing qualities, and was with the squadron, now under Commodore John Rodgers, in actions before Tunis in August 1805. The warship returned to the United States one year later in August 1806.

Vixen was placed in ordinary at the Washington Navy Yard immediately upon her return from the Mediterranean. She left the yard one year later and subsequently operated along the Atlantic coast under Lieutenants James Lawrence and Charles Ludlow. She continued this duty until the outbreak of the War of 1812, at which time she sailed along the southern coast under Master Commandant Christopher Gadsden, Jr., and, after his death on 28 August 1812, under Lt. George Washington Read. During one of her war cruises among the West Indies, Vixen was chased, intercepted, and captured by the 32-gun British frigate HMS Southhampton on 22 November 1812. Both vessels were soon afterwards wrecked on Concepcion Island in the Bahamas, but the officers and crews all survived. Lt. Read, however, died of yellow fever in Jamaica before he could be exchanged.