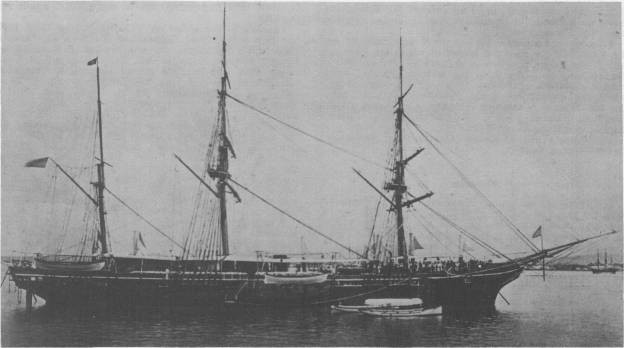 Caption: USS Vandalia as flagship of the Pacific Squadron.

A city in Illinois on the Kaskaskia River. Vandalia was the state capital from 1820 to 1839 and today is the seat of Fayette County. The origin of the name is uncertain, but the name probably is derived from the Germanic Vandal tribe. Other explanations of the name hold that it is a latinization of a Dutch family name or that it refers to a small Indian tribe of the early 19th century.

The second Vandalia was laid down at the Boston Navy Yard, Mass., in 1872 and commissioned there on 10 January 1876.

Vandalia was soon deployed with the European Squadron and spent most of the next three years cruising in the Mediterranean along the coasts of Africa, the Middle East, and Turkey. She put into Villefranche, France, in October 1877, and left on 13 December with the former President, Gen. Ulysses S. Grant, as a passenger. During the next three months, the screw sloop of war touched at ports in Italy, Egypt, Turkey, and Greece, before President Grant disembarked at Naples on 18 March 1878. After making several more Mediterranean cruises, Vandalia received orders to return to the United States later that year. She put into Boston on 13 January 1879 and departed on 7 April, bound for Norfolk, Va., and duty with the North Atlantic Squadron.

Vandalia remained with the North Atlantic Squadron for five years. During this time, she performed patrol, reconnaissance, and convoy escort duty off the eastern seaboard of the United States. The vessel was also active off the Grand Banks and in the Gulf of Mexico and the Caribbean. Vandalia was detached from the squadron in 1884 and put out of commission at the Portsmouth (N.H.) Navy Yard on 14 October for a thorough overhaul.

Repairs continued for over a year before Vandalia was ready for recommissioning on 15 February 1886. The sloop left New York on 14 August, heading westward for duty with the Pacific Squadron as the flapship of Rear Adm. Louis A. Kimberly. Vandalia remained with the squadron into 1889, seeing duty in the Hawaiian Islands and Samoa, as well as along the Pacific coasts of North, Central, and South America. The sloop put into the Mare Island Navy Yard, San Francisco, Calif., for repairs on 11 October 1888.

While Vandalia lay at Mare Island, relations between American and German officials at Apia, Samoa, became increasingly strained. Late in the winter of 1888, at the behest of the American consul in Samoa. Vandalia, Trenton, and Nipsic sailed for Samoa and reached Apia Harbor early in March to balance the presence of the German vessels SMS Adler, Olga, and Eber. The British were ably represented by HMS Calliope. On 15 and 16 March 1889, each of these vessels suddenly became trapped in the harbor when violent, hurricane-force winds roared out of the northeast, driving mountainous waves before them. Adler, Olga, and Eber were all either sunk or hopelessly grounded and torn apart on the sharp reef, and together lost a total of 150 officers and crew killed. The powerful engines of Calliope barely enabled the vessel to get to sea in a dramatic performance that drew cheers from the crews of the American vessels. However, despite heroic efforts by the officers and crews of Vandalia and Trenton, the two vessels tore their bottoms out upon the reef on 16 March. Vandalia struck at about noon and sank until her docks were completely awash, forcing her crew to scramble into the rigging. Trenton grounded alongside Vandalia at 2200 that evening, but enough of her main deck remained above water to allow Vandalia's crew to climb on board. After the hurricane began, Nipsic was driven ashore on a sandy beach and was later salvaged.

American casualties totalled 49 killed, 43 from Vandalia alone. The survivors from Vanadalia, Trenton, and Nipsic soon sailed for Mare Island on board a chartered steamer, but Vandalia and Trenton themselves were so battered that they were soon dismantled and their scrap donated to the Samoans.