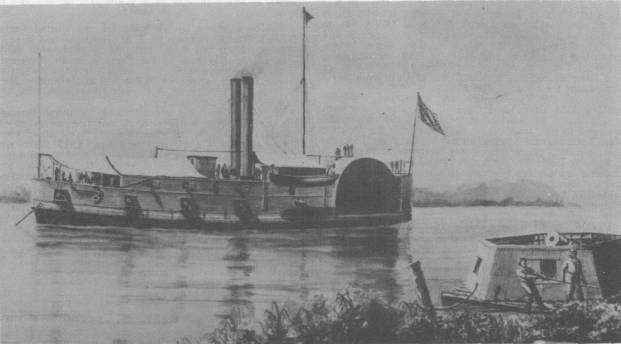 Caption: An artist's depiction of the gunboat Tyler on the Mississippi with a siege "mortar boat" in the foreground. (NR&L(O) 1535)

Charles Tyler, born in 1760, entered the Royal Navy in 1771 and rose in rank during service in a number of British men-of-war. Despite an injury to his left leg in 1777 which left him permanently lame, he continued to serve the Navy, for the most part afloat, through much of the War for American Independence and the Napoleonic wars. He commanded the 80-gun ship of the line Tonnant during the battle of Trafalgar. Tyler was knighted in 1815 and was promoted to admiral in 1825. He died at Gloucester on 28 September 1835.

During her naval service, the Civil-War, sidewheel gunboat Tyler retained a part of her merchant name, A. O. Tyler. DE-567 was named by the Royal Navy for Sir Charles Tyler.

A. O. Tyler, a side-wheel steamer built in 1857 at Cincinnati, Ohio, was acquired by the War Department on 5 June 1861; converted to a river gunboat; and renamed Tyler.

From June 1861 to 1 October 1862, Tyler served in the Western Flotilla, an Army organization, led by naval officers, created to gain and maintain for the Union control of the Mississippi River and its tributaries. Commissioned in September 1861, she participated in an attack on the Confederate batteries located near Hickman and Columbus, two railroad towns located on the Mississippi River in western Kentucky. During the action, she also traded shots with the Confederate gunboat Jackson. On 7 October, she returned to Columbus to duel with the Southern batteries once again. A month later, when the Confederates tried to cut off two columns of Federal troops invading pro-Southern, south-eastern Missouri, Brigadier General Grant mounted an expedition to clean out the Confederate camp at Belmont, Mo. Tyler and Lexington escorted the transports from Cairo to Belmont and then moved downriver and bombarded the Confederate batteries across the river at Columbus, Ky. Confederate reinforcements crossed the river and counterattacked, but Tyler and Lexington abandoned their attack on the works at Columbus, broke up the Southern counterattack, and covered the withdrawal of the outnumbered Federal contingent.

The gunboat remained relatively quiet until February 1862, making only one reconnaissance trip down the river at the end of the first week in January. However, when General Grant decided to advance up the Cumberland and Tennessee Rivers, he called upon the gunboats to support his move. The campaign resulted in the fall of Forts Henry and Donelson, on 6 February and 16 February, respectively. These victories opened the whole of the Tennessee-Cumberland water system to Federal forces, made Confederate positions in western Kentucky untenable, and threatened Nashville, Tenn.

Though she was present as a participant at the captures of both forts, Tyler's most significant contribution came in the brief interlude between the two capitulations. During the period 6 to 10 February, the gunboat joined Conestoga and Lexington in a raiding expedition farther up the Tennessee River to Florence, Ala. Along the way, they destroyed a railroad bridge located about 25 miles above Fort Henry and then continued upriver in pursuit of some Confederate gunboats. At Florence, Mussel Shoals stopped any additional advance; but, during the run between the railroad bridge and Florence, the Union force succeeded in capturing three of the fleeing gunboats, and its advance forced the Southerners to destroy six others.

One of the captured ships, Eastport, proved to be one of the best contemporary river steamers and had been earmarked for conversion to an ironclad. Her capture robbed the South of what would have been a formidable addition to her riverine forces and gave the Northerners a valuable addition to theirs. On the return downriver to join in the campaign against Fort Donelson, Tyler and her consorts took with them a large amount of captured naval stores, notably a quantity of timber and iron the Southerners had collected for Eastport's conversion to an ironclad and which the Union forces used in their own conversion of the captured vessel.

After participating in the two-day action which culminated in the surrender of Fort Donelson-the Cumberland River fort, Tyler resumed operations on the Tennessee River in support of Grant's advance southward along the river's banks through western Tennessee. On 6 and 7 April, when Confederate forces under General Albert Sydney Johnston surprised Grant's troops in southwestern Tennessee near Pittsburg Landing and began pushing them back into the river, Tyler and Lexington, moored nearby, brought their guns to bear when the Confederates attempted to protect their right flank by anchoring it on the river bank. Tyler and Lexington delivered a devastating enfilading fire that forced the Southern right flank to fall back. Grant's troops took advantage of the withdrawal to mount a general advance supported by naval ordnance. Thus, victory ensued where debacle seemed imminent. In Grant's own words, "in this repulse much is due to the presence of the gunboats."

Later, on 19 April, Tyler moved farther south, back to Florence, Ala., where she captured the Confederate transport Albert Robb and burned another Southern ship, Dunbar. But, after Shiloh and the capture of Island No. 10 on the Mississippi, the North shifted the emphasis of its war in the west to conquering that mighty river in an effort to divide the Confederacy in two. Fort Pillow fell on 4 June and Memphis, Tenn., on the 6th. Vicksburg, Miss., was the next obstacle, and it took more than a year to remove it. Those efforts occupied Tyler intermittently for the ensuing 13 months. Her first action of the Vicksburg campaign came in mid-July when she joined the ironclad Carondolet and the Queen of the West in probing the Yazoo River above Vicksburg in search of the incomplete, Confederate, ironclad ram Arkansas which had eluded capture at Memphis and sought refuge far up the Yazoo. The falling waters of the Yazoo forced Arkansas downriver; but, by then, she was virtually complete and ready for battle.

On 15 July, the Union probe and the falling river brought Tyler and her colleagues into a collision with Arkansas. After a brisk exchange of cannonades, Carondolet was disabled. Only Tyler, abandoned by Queen of the West, remained to suffer the full onslaught of the powerful Southern warship. Recognizing the futility in attacking her adversary unsupported, Tyler reluctantly retreated with Arkansas in pursuit. After a running fight all the way down the Yazoo, the two warships reached the Union fleet lying near the confluence of the two rivers. Tyler sought refuge among the fleet while Arkansas ran through it, delivering salvo after salvo into the aggregate of ships, and moored safely under the protection of the Vicksburg shore batteries.

During the first phase of the siege of Vicksburg, Tyler participated in the joint Army-Navy expedition up the Yazoo River to establish a landward advance on the Confederate stronghold. That expedition lasted from 7 December 1862 until 3 January 1863. Though the expedition showed no immediate fruits, the land campaign, in conjunction with the waterborne attacks, eventually brought Vicksburg to her knees. In the meantime, Tyler saw action in two other operations- the first was to open Arkansas to invasion and the second was in support of the slow strangulation of Vicksburg. In mid-January, she joined other units of the squadron in escorting Army transports to Fort Hindman which guarded Arkansas Post, Ark., on the invasion route to Little Rock. Federal forces carried that fort finally on 9 January 1863 after a combined sea and land campaign. Following that expedition, the gunboat resumed a patrol routine on the Mississippi until late April.

On the 29th, she joined another expedition up the Yazoo, and it resulted in the fall of the important fortifications on Haynes Bluffs on 1 May. That operation was the gunboat's last major role in the reduction of Vicksburg which surrendered to Union forces on Independence Day 1863. Tyler resumed her support for Army troops upriver invading Arkansas. On the day that Vicksburg surrendered, the gunboat brought her guns to bear on an attacking Confederate force near Helena, Ark., and, once again, saved the day for Federal rams.

For the remainder of the war, she participated in the invasion of Arkansas, operating principally on the White River. Her last major scrape with the Confederates came on 24 June 1864 far up the White River near Clarendon, Ark., when she engaged the Southern shore batteries which damaged and captured the gunboat Queen of the West. The beginning of 1865 found her still on the White River; but, by May, she was at Memphis, Tenn. In June, Tyler moved to Mound City, Ill., where she remained until sold at auction there on 17 August 1865 to Mr. David White, of St. Louis, Mo.

Tyler, a projected Buckley-class destroyer escort designated DE-567, was assigned to the United Kingdom on 10 June 1943; and her keel was laid down on 6 October 1943 at Hingham, Mass., by the Bethelehem Steel Co. The ship was launched on 20 November 1943 and delivered to the Royal Navy under lend-lease on 14 January 1944.

In 1944, Tyler, a "Captain-class" frigate, served the Royal Navy in the English Channel and participated in the invasion of Normandy. In 1945, she alternated escort duty in the Atlantic with Channel operations. One of her more exciting moments came on the evening of 27 January 1945, when she joined Keats and Bligh in sinking the German U-boat U-1051 between St. George's Channel and the Irish Sea.

After the war ended, Tyler steamed back to the United States and arrived at Philadelphia on 31 October 1945. She was formally returned to the United States Navy in November of that year and, on 8 January 1946, was struck from the Navy list. On 23 May 1946, she was sold to Hugo Neu of New York City and later resold to the Northern Metal Co., Philadelphia. She was scrapped in the summer of 1946.