A mobile, destructive vortex of violently rotating winds having the appearance of a funnel-shaped cloud and advancing beneath a large storm system.

The second U.S. Navy ship named Tornado. Winnebago, a monitor, was renamed Tornado on 15 June 1869, but resumed the name Winnebago on August of the same year, and served from 1864–1874. 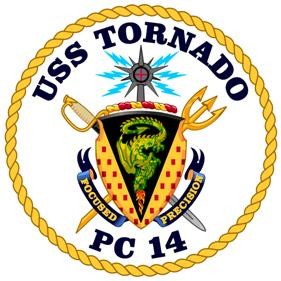 Dark blue and gold are the colors traditionally used by the Navy. The black pile suggests the funnel of a tornado and bears a dragon, an awe inspiring mythological beast breathing fire and destruction, symbolizing the ferocity and violence of a tornado. The red billets highlight the confusion and havoc left by the storm.

The trident, adapted from the Naval Special Warfare insignia, and crossed with a Navy sword, refers to the ship’s mission of providing support for Special Warfare forces.

Coast Guard Pacific Area and the U.S. Pacific Fleet jointly announced on 5 November 2001, the assignment of two Cyclone-class ships, Monsoon (PC-4) and Zephyr (PC-8), in support of the nation’s homeland security along the U.S. West Coast as a part of Operation Noble Eagle, where they operated under the tactical control of the Coast Guard Pacific Area command. Operational control of the ships, normally assigned to Special Operations Command through Commander, Naval Special Warfare Command, shifted to the Pacific Fleet. Three other Cyclone-class ships, Shamal (PC-13), Tempest (PC-2), and Tornado, were to be assigned to the U.S. Atlantic Fleet for maritime homeland security operations, and home ported at Pascagoula, Miss. The Memorandum of Understanding directed the Navy to retain ownership as well as the responsibility for all life cycle management/maintenance, depot management, and casualty corrective service through 2008.  The Coast Guard assumed the “responsibility for crew assignment, cutter funding, retrofitting, operation and management.”

When Hurricane Isabel, that had already devastated much of the Gulf and East Coasts of the U.S., threatened Hampton Roads, Va., on 18 September 2003, aircraft carrier Theodore Roosevelt (CVN-71) came about in an emergency sortie, turned into the wake of the hurricane, and made for Naval Station (NS) Norfolk. Upon arrival, her crewmembers assisted victims of the storm along the Virginia and North Carolina coasts. Forty naval ships and submarines sortied from the area, but Tornado remained behind with other vessels and rode out the tempest at her moorings.

Tornado was decommissioned and transferred to the Coast Guard at Coronado, Calif., which reclassified her as WPC-14, on 30 September 2004, and commissioned her on 6 December of that year. 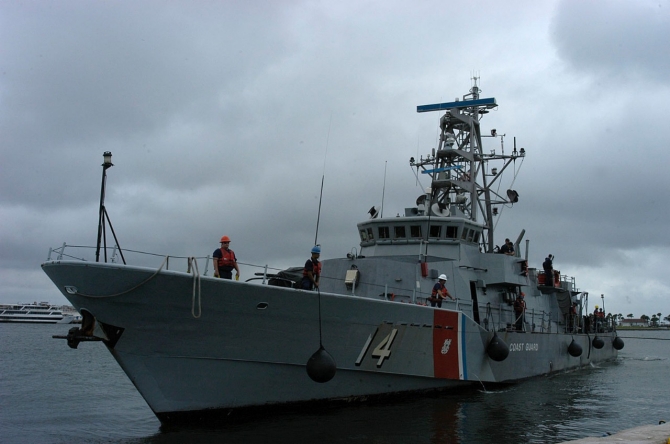 Tornado, Lt. Cmdr. Christopher Hollingshead, USCG, in command, carried out Alien Migration Interdiction Operations between Key West, Fla., and Cuba, in March and April 2007. During one such patrol, she chased a go-fast (a 40-ft high-performance speed boat loaded with extra food and lifejackets) for eight hours, a pursuit that covered nearly 200 miles and involved two other Coast Guard ships and a Coast Guard plane. Coast Guard cutter Farallon (WPB-1301) discovered the go-fast and it attempted to escape, approximately 50 miles west of Tornado’s position. Farallon gave chase and the Coast Guard tasked Tornado to assist in the pursuit. Tornado worked with Farallon and another Coast Guard cutter, coordinating communications and position updates among all the vessels involved, as the hunt continued in international waters along the north coast of Cuba and south along Cuba’s west coast. A Lockheed HC-130H Hercules flying from Coast Guard Air Station Miami provided aerial coverage and sent critical information back to the ships during the chase. With Farallon in pursuit, Tornado closing on the chase, and Hercules overhead, the Coast Guardsmen developed an intercept plan that took advantage of the approaching darkness and the speedboat’s inability to evade the Coast Guard ships’ coordinated pursuit. Farallon intercepted the speedboat in the vicinity of the Yucatan Channel as Tornado sealed any potential escape route, and stopped the go-fast. The Coast Guardsmen turned the two people on board the vessel over to Customs and Border Protection officials in Key West.

On 27 February 2008, Tornado rescued two men from their small personal craft after she took on water, about 53 miles south of Key West. The Coast Guard operated Tornado until on 30 September 2011, when she, Shamal, and Zephyr (WPC-8) were returned to the Navy. 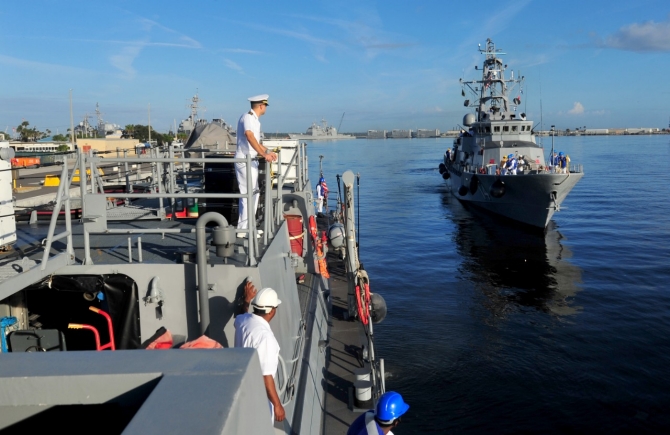