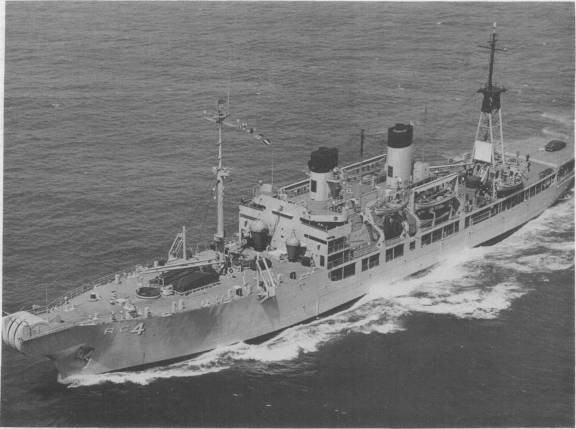 The Norse god of thunder.

Following shakedown out of Hampton Roads, Vanadis arrived at Newport, R.I., on 4 August and began shuttling back and forth between that port and Hampton Roads. In mid-December, the attack cargo ship headed for the Gulf of Mexico. After visiting Mobile, Ala.; Gulf port, Miss.; and Jacksonville, Fla., she arrived at Boston. On 6 February, she reported to the Commandant, 1st Naval District, for inactivation. Vanadis was placed out of commission on 27 March 1946. Her name was struck from the Navy list on 5 June 1946; and, on 2 July, she was transferred to the Maritime Commission.

After almost nine years of inactivity, berthed with the National Defense Reserve Fleet at James River, Va.,Vanadis was reacquired by the Navy on 14 April 1955 and reinstated on the Navy list as AKA-49. On 30 June, she entered the Bethlehem Steel Co.'s yard at Baltimore, Md., for conversion to a cable repair ship. She was redesignated ARC-4; and, on 14 November 1955, she was renamed Thor. On 3 January 1956, Thor completed her conversion and was recommissioned, Comdr. R. H. Thomas in command.

The cable repair ship operated in the Atlantic through 1956. In February 1957, she reported to the Pacific Fleet and, until the fall of 1958, operated out of San Francisco repairing and laying cables. She returned to the Atlantic in September 1958 and served there until the summer of 1961, when she was temporarily assigned to the Pacific again. The cable repair ship returned to operations in the Atlantic in December. Following an overhaul at Boston in the spring of 1962, Thor deployed to the Pacific once more for cable repair operations in the northern reaches of that ocean. In October, she returned to the eastern side of the Isthmus of Panama and busied herself with cable repair duties and oceanographic projects in the Caribbean Sea. For the next five and one-half years, Thor continued to repair and lay cables in the western Atlantic and in the West Indies. Occasionally, she also participated in more oceanographic projects. During that half decade, she ranged as far north as Nova Scotia and as far south as the Caribbean. Periodically, she also conducted operations in the Gulf of Mexico.

On 20 April 1968, the ship departed Norfolk and steamed, via the Panama Canal and San Diego, for the Central Pacific. She conducted special operations in the vicinity of Midway Island and returned to Hawaii on 16 June for several days before departing Pearl Harbor on the 24th for the Marianas. She reached Guam on 5 July and spent the next month repairing cable around that island. She returned to Pearl Harbor on 13 August and operated in the Hawaiian Islands until she headed back toward the mainland on 7 November. Following a brief stop at Long Beach, Calif., Thor returned to Norfolk on 6 December.

Over the next four years, Thor deployed to the Pacific three times. In August 1969, after seven months of operations along the east coast, she headed, via the Panama Canal and San Diego, to Pearl Harbor. Through November, she conducted operations near Midway Island and then returned to the Atlantic via Pearl Harbor, Long Beach, and the Panama Canal. In February 1970, she entered the Bethlehem Steel Shipyard in Boston to begin a year-long overhaul and repair period. In mid-February 1971, the cable repair ship resumed normal operations until late June when she deployed to the Pacific once more. She reached Hawaii on 29 July and departed again on 9 August for cable operations in the northernmost reaches of the Pacific, near the Aleutians chain. She completed those repairs late in the month and, after visits to Esquimalt, British Columbia, and San Diego, retransited the canal on 20 September and arrived in Portsmouth, N.H., eight days later. During the first seven months of 1972, the cable repair ship operated along the eastern seaboard again. On 24 July, Thor departed Norfolk for her last assignment in the Pacific Ocean. She arrived at Alameda, Calif., on 11 August and conducted cable laying operations from there into late November. On the 24th, the ship cleared Alameda. She passed through the Panama Canal on 4 December and arrived back at Portsmouth on the 12th.

On 17 January 1973, Thor embarked upon her last overseas cruise as a commissioned ship in the Navy. She arrived in Swansea, England, 10 days later and, after two days in port, put to sea for cable operations. From 14 to 18 February, she visited the Submarine Base at Holy Loch, Scotland, before resuming cable operations near the Arctic Circle. She completed her assignment at the end of the month and, after another visit to Holy Loch during the first week in March, headed back to the United States. On 17 March, she returned to the Portsmouth Naval Shipyard to begin preparations for decommissioning incident to her transfer to the Military Sealift Command.

Thor (ARC-4) was decommissioned at Portsmouth on 2 July 1973 and simultaneously transferred to the custody of the Military Sealift Command. USNS Thor (T-ARC-4) operated with the Military Sealift Command, primarily in the Pacific, until April 1974 when she was returned to the Maritime Administration to be placed in reserve. Since then, she has been berthed with the National Defense Reserve Fleet at Suisun Bay, Calif.