The first U.S. Navy ship to honor the late Jesse Junior Taylor (16 January 1925-17 November 1965), but the third ship named Taylor. The first, Destroyer No. 94, was named for Rear Adm. Henry Clay Taylor (1811-1899) http://www.history.navy.mil/research/histories/ship-histories/danfs/t/taylor-i.html; the second, DD-468, commemorated the service of Rear Adm. William Rogers Taylor (1845-1904) http://www.history.navy.mil/research/histories/ship-histories/danfs/t/taylor-ii.html. For additional information on the man for whom FFG-50 was named, see http://www.public.navy.mil/surflant/ffg50/Pages/Namesake.aspx and https://www.usnwc.edu/NWCSite/media/Graduation-Programs/19-June-1963-Graduation.pdf. 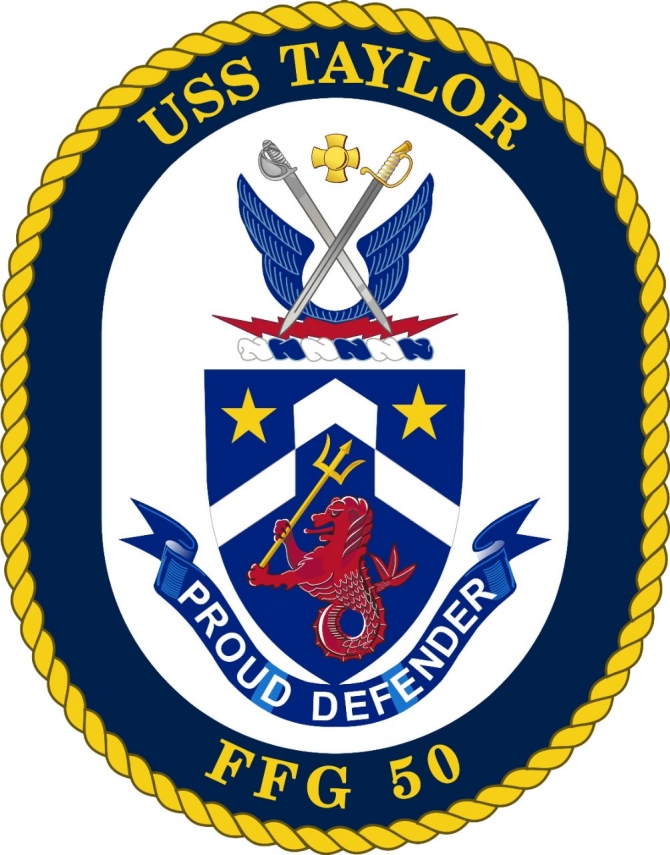 The blue shield represents the Navy. The chevron is a reference to Taylor’s naval career, comprising three periods of service -- World War II, his training and service in peacetime, and his final tour to the Vietnam War. The two gold stars allude to his two awards of the Air Medal, and to the two earlier ships which bore the name Taylor. The sea lion refers to his courage and dedication to duty, and holds a gold trident in reference to his zeal in upholding the honor and traditions of the Navy and the nation. The use of scarlet, blue and gold on the shield refers to the Navy Presidential Unit Citation awarded to aircraft carrier Hornet (CV-12) at the time Taylor saw action from her flight deck while serving in Bombing Squadron (VB) 11.

The wings represent Taylor’s service as a naval aviator. The scarlet lightning flash refers to his training as a Radioman and his service with the Fleet All Weather Training Unit, and also refers to his attacks on enemy gun sites during the rescue attempt that cost him his life. The gold cross represents the Navy Cross he received, posthumously, for his heroism. The crossed swords represent Taylor and the downed pilot he attempted to save.

The coat of arms emblazoned upon a white oval, enclosed within a blue collar edged on the outer side with gold rope, and inscribed with the words “USS TAYLOR” at the top and “FFG 50” in base in gold letters.

Five Taylor sailors fell overboard while lowering a rigid hull inflatable boat (RHIB), approximately 50 nautical miles off northern Florida, at about 1930 on 6 October 2004. Their shipmates rescued all of the five, two of whom were then flown to Naval Hospital Jacksonville, Fla., where the medical team treated the first crewmember for shock and the second for a possible back injury.

Taylor took part in Operation Ocean Shield : maritime interception and counter-piracy operations in the Gulf of Oman in the spring of 2012. Alert aircrewmen of an SH-60B of Helicopter Antisubmarine Squadron (Light) 48 Detachment 9, embarked on board Taylor, spotted Yemeni fishing dhow Nahda, adrift approximately 190 nautical miles southwest of Salalah, Oman, on 19 May 2012. “We descended down to check the dhow and noticed there were a few people on deck,” Lt. Jason Elfe, the Seahawk’s pilot, recalled. “They began to wave their arms above their heads very similar to the international sign of distress. These actions were not typical, based on previous encounters, and I had already noticed the vessel was not moving. Putting the two together, I realized that the vessel was in distress.” The helo directed Taylor to the area, and the ship lowered a visit, board, search and seizure team in a RHIB to render assistance. The RHIB lay alongside Nahda and the team members boarded the dhow, whose master explained that the boat’s engine failed while they were sailing from Socotra Island to Shihir, Yemen. Two of the frigate’s enginemen inspected Nahda’s engine and confirmed that it would require extensive repairs ashore. Taylor remained in the area overnight while her sailors provided food and water to the mariners and her medical team examined them. The ship then towed the dhow toward Yemeni territorial waters, until the Yemeni Coast Guard arrived on 21 May and took the stricken boat in tow. 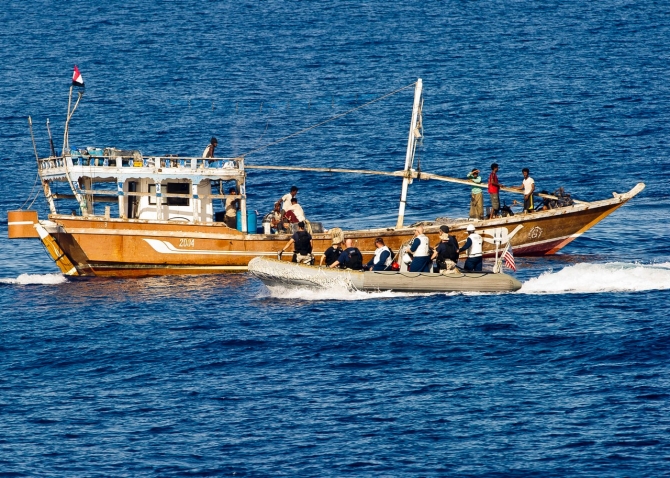 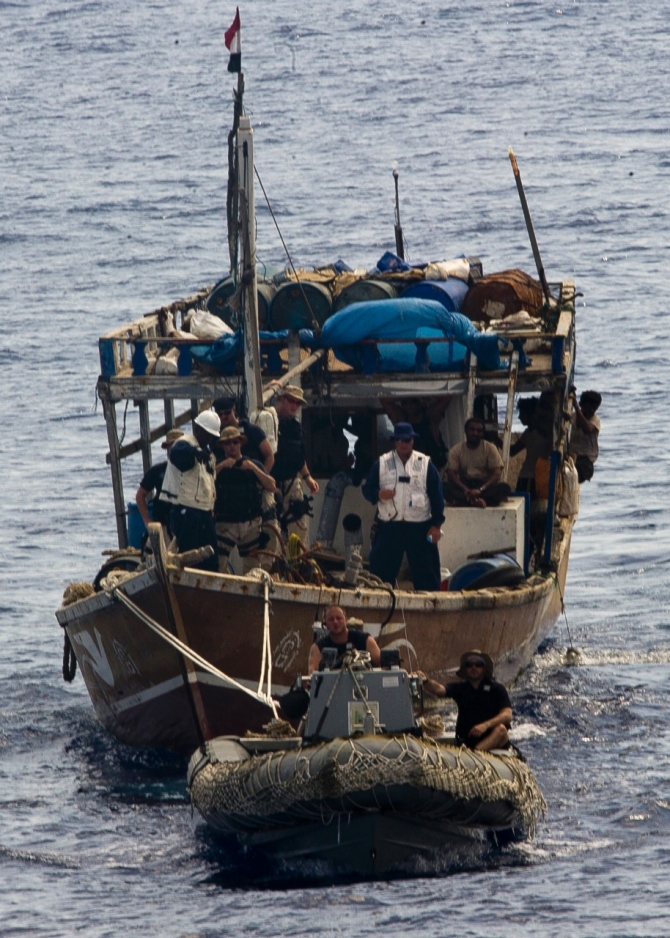 On 12 February 2014, Taylor ran aground while mooring at Samsun, Turkey. The ship did not report casualties and a Donjon Towing Company tug helped the frigate move clear of the shallows. The ship completed emergent repairs, but a fortnight later, on 25 February, Capt. James A. Aikin Jr., Commander Task Force 65, relieved Cmdr. Dennis Volpe, her commanding officer, due to Aikin’s loss of confidence in Volpe’s ability to command. Volpe was reassigned to Destroyer Squadron 14’s staff, and Cmdr. Christopher F. Cigna assumed temporary command of the ship. Taylor sailed from Samsun on 7 March, and spent several weeks repairing her propeller blades and propeller hub at Naval Support Activity Souda Bay, Crete, Greece. 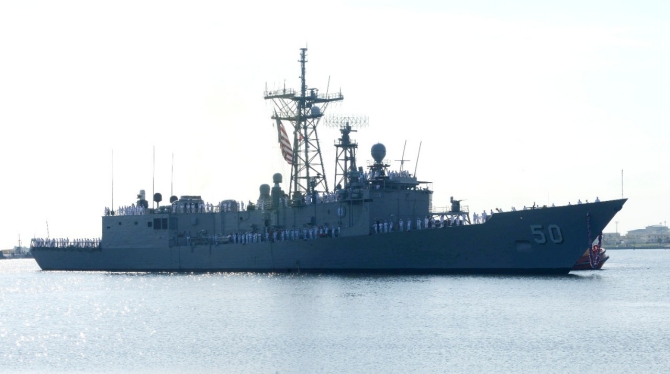 The ship is scheduled to be inactivated on 8 May 2015.