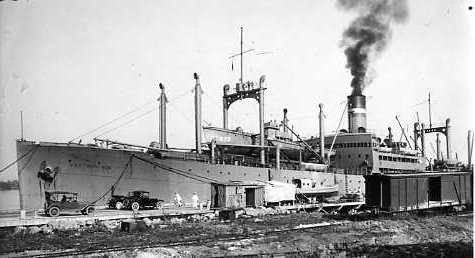 The Navy retained the name that this ship carried at the time of her requisition.

South Bend (ex-M. E. Luckenbach), a large freighter, was the first of four sister ships ordered by the Luckenbach Steamship Co. from the Sun Shipbuilding and Drydock Co., Chester, Pa., shortly before the U.S. Shipping Board (USSB) on 3 August 1917 requisitioned all merchant ships then under construction or on order in American shipyards.

Allocated to the Cruiser and Transport Force to bring troops home from Europe following World War I, South Bend departed Philadelphia on 8 March 1919 for New York. She remained at anchor there from 10 March until entering drydock at Shooters Island on the 30th for shipyard work associated with her conversion from a cargo ship to a troop transport. The ship moved to the Army's Bush Terminal in Brooklyn on 27 April 1919 and probably completed fitting out as a transport there. On 13 May, South Bend shifted to a commercial pier at Hoboken, N.J., and on 17 May she got underway on the first of her three trooping voyages to France. The transport moored at the American Docks, Bassens, France, near Bordeaux, on 29 May, and on 5 June she embarked 43 officers, 2,215 enlisted men, and 11 civilians. She departed the same day for New York, reaching Hoboken on 19 June.

South Bend left Hoboken on her second trooping voyage on 24 June 1919, and arrived at St. Nazaire, France, on 4 July. The next day, she embarked 41 officers, 2,204 enlisted men, and 3 civilians and departed on her return voyage to New York. The transport arrived at the Bush Terminal on 15 July, disembarked her passengers, and four days later got underway again for France. She anchored in the roadstead at Brest on 29 July and remained idle there until ordered on 18 August to move alongside the Army dock at Brest. There on 19 August she embarked a small contingent of 30 officers and 314 troops and immediately got underway for New York. She arrived at the U.S. Army Terminal at Brooklyn on 28 August. On 1 September 1919, South Bend was placed out of commission and turned over to the Army. She was stricken from the Navy List the same day.

The Army soon transferred South Bend to the USSB, who in 1922 sold her back to the Luckenbach Steamship Co. She operated as J. L. Luckenbach until 1948, when she passed to the Panamanian flag as San Francisco. The freighter became the Indonesian Diponegoro in 1951, was renamed Djakarta Raya in 1952, and was scrapped at Hong Kong in 1959.