After completing a Coast Guard homeland security inspection of a liquid gas tanker, the sailors involved brought their rigid hull inflatable boat (RHIB) about, and returned to Typhoon (PC-2). While the RHIB lay alongside the patrol vessel off Cape Henry, Va., at 0355 on 7 November 2003, swells knocked Typhoon’s 42-year-old Engineman 2nd Class Douglas Bolles into the water. When the coxswain attempted to grab Bolles the RHIB capsized, throwing him into the water. Typhoon’s crew rescued the coxswain, but despite an extensive search by guided missile destroyers Barry (DDG-52), Donald Cook (DDG-75), and Porter (DDG-78), patrol craft Shamal (PC-13), Sirocco, Tempest, and Thunderbolt (PC-12), Coast Guard cutter Albacore (WPB-87309), and aircraft, they failed to find the missing sailor. Some fishermen recovered his body about 18 miles east of Back Bay in the Virginia capes during the afternoon watch on 22 November. 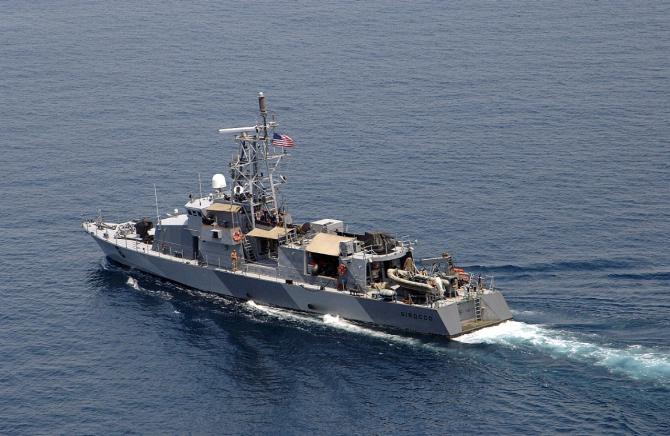 Sirocco, in camouflage reminiscent of the straight-edged and angled measures of World War II, and awnings over her decks providing shade from the scorching sun, speeds northward to support maritime security operations in the Arabian Gulf, published on 18 April 2005. (Unattributed or dated U.S. Photograph 050413-N-5526M-010, Navy News Stand)

At approximately noon on 1 September 2010, Maltese-flagged merchant vessel Lucky Trader called for medical assistance for a crewman with a severed finger, who had suffered deep lacerations to his hand during a line-handling accident earlier that morning in the Arabian Gulf. Sirocco sped to the scene, and dispatched Hospital Corpsman 1st Class Christopher Robinson, Interior Communications Technician 1st Class Michael Klebak, and Gunner’s Mate 3rd Class Alan Bitokhov in a rigid hull inflatable boat (RHIB) to Lucky Trader. The Sailors treated the mariner, Robinson administering first aid and applying a tourniquet to the wound. “In the past, I’ve always had the safety net of a medical officer or senior corpsman,” Robinson recalled. “Today I felt like I was on a tight rope without a net, but I knew I needed to help him and quickly.” The corpsman grew concerned that the tourniquet would ultimately result in the loss of the crewman’s hand, so he loosened it periodically over the next four hours, allowing enough blood to flow to the appendage, but not enough to cause serious blood loss. The three Sailors continued to treat and monitor the man until he was transferred to a Kuwait Coast Guard vessel, and from there to a Kuwaiti hospital.