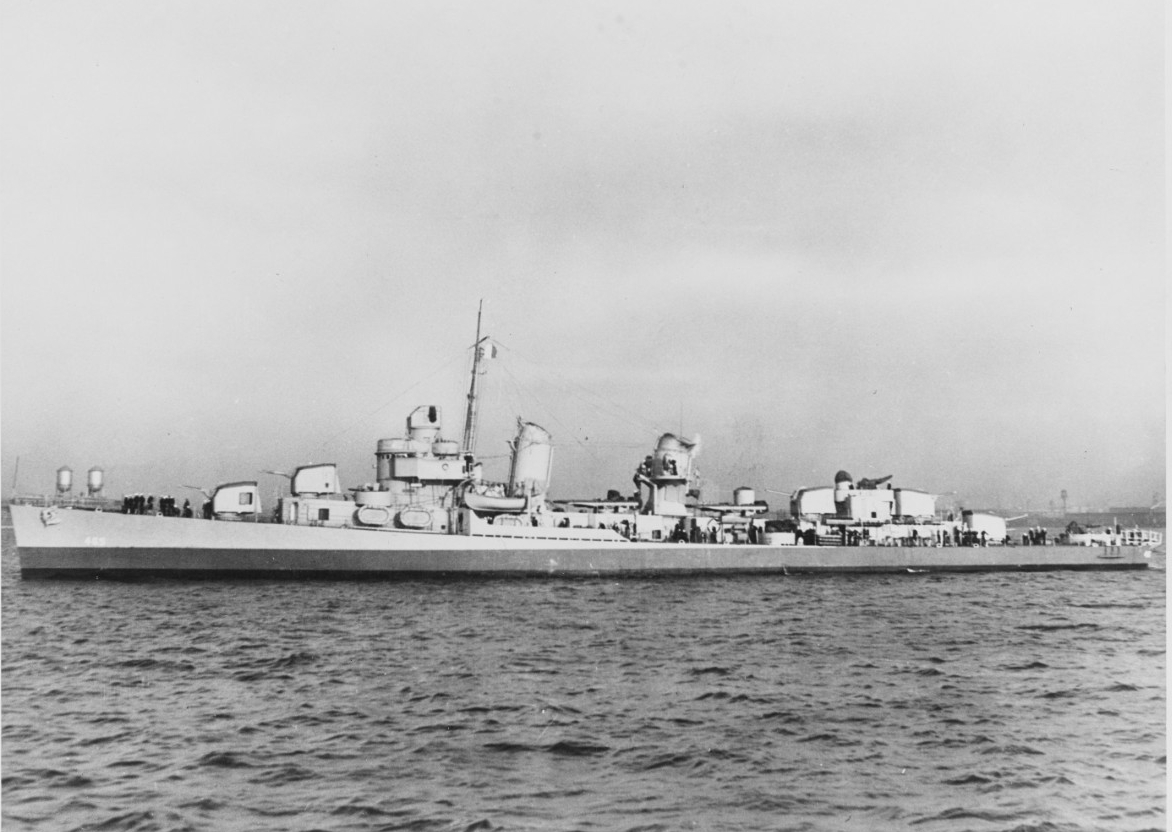 Saufley (DD-465) underway at very slow speed, circa 1943. This photograph was retouched by wartime censors to remove radar antennas atop her mast and Mark 37 gun director. Official U.S. Navy photograph from the collections of the Naval History and Heritage Command. Catalog#: 107433

Richard Caswell Saufley, born on 1 September 1884 at Stanford, Ky., was graduated from the Naval Academy in June 1908 and was commissioned Ensign in June 1910. Service in Kansas, Biddle, and Terry preceded his return to the Naval Academy for training in aviation in 1913. On 6 June of that year, he was promoted to Lieutenant (jg.) and designated Naval Aviator No. 14. During the Mexican campaign, he was attached to Mississippi (BB-23) and North Carolina (Armored Cruiser No. 12). In 1915 and 1916, his assignments were concerned with the technological development of naval aviation. Concentrating on hydro-airplane development, he set altitude and endurance records and was attempting to better his own record when he died in a plane crash at Pensacola on 9 June 1916.

Following shakedown off northern New England, Saufley made several coastal escort runs and then prepared for duty in the South Pacific. She departed Norfolk on 9 September. Arriving at Noumea, New Caledonia, on 2 December, Saufley commenced participation in the Guadalcanal campaign three days later.

Initially assigned to escort reinforcements from Espiritu Santo to Lunga Point, Saufley soon undertook antishipping sweeps in the waters north and west of Guadalcanal and conducted shore bombardment missions against enemy positions on the island. During the Japanese evacuation of Guadalcanal in late January and early February 1943, Saufley operated with Task Force 11. On 19 February, she sailed for Lunga Roads to join with other units staging for Operation "Clean-slate," the occupation of the Russells.

During that operation, Saufley transported troops, towed landing craft to the target islands, and provided shore bombardment in support of the troops as they landed on Pavuvu and Banika islands on the 21st. From these islands, planes would be able to cover operations against Rendova.

In March, Saufley resumed escort and antisubmarine duties in the southern Solomons-New Caledonia-New Hebrides area. Following an abbreviated availability at Sydney, Australia, she returned to Noumea and resumed escort work until the end of June. On the 30th, as Allied forces moved toward Rendova, Saufley bombarded Japanese shore installations there.

July and August found Saufley engaged in assault operations against New Georgia and escort missions to the New Hebrides and Vella Lavella. On 31 August, she received minor damage, but no casualties, from near misses by shore batteries in the "Slot," the narrow body of water that separates the central Solomons.

At 1011 on 15 September, while Saufley was en route to Espiritu Santo in company with Montgomery (DD-121) and two merchantmen, a torpedo wake was sighted. As Montgomery's sound gear was inoperative, Saufley initiated a search down the track of the torpedo wake. Over the period of the next three and one-half hours, she delivered five separate depth charge attacks against the submarine. At 1443, the Japanese submarine, RO-101, surfaced.

Saufley's five-inch batteries and machine guns opened up on the conning tower of the submarine. A Catalina flying boat moved in and dropped two depth charges. The first charge missed the target by about 40 feet, but the second one hit it. When the splash subsided, the submarine was gone. An underwater explosion was heard; and, by 1735, diesel oil, covering an area of approximately one square mile, marked the grave of RO-101.

During the remainder of September and well into October, Saufley was engaged in night antibarge patrols between Kolombangara and Choiseul. She sank four barges during this period but sustained damage from Japanese aerial bombs on the night of 1 October which resulted in the death of two crew members and the wounding of 11 others.

The months of November and December 1943 and January 1944 found Saufley performing escort duties for the reinforcement of Bougainville. In February, Saufley was engaged in the assault on the Green Islands which broke the Japanese Rabaul-Buka supply line and provided the Allies with another airfield near Rabaul. Antisubmarine patrols were followed by call fire support missions during the occupation of Emirau Island. This action, which completed the "ring around Rabaul," took Saufley into April. She had returned to the Emirau-Massau area when, on the morning of the 7th, she gained contact on a submerged submarine. Forty-five minutes and 18 depth charges later, two underwater explosions were heard. Within hours, oil covered the area. Postwar review of Japanese records identified the sunken submarine as I-2. Following escort duties to the Admiralties, Saufley returned to Purvis Bay on the 18th whence she conducted exercises with TF 38 into May.

On 4 May, the destroyer sailed for Pearl Harbor. Arriving on the 12th, she sailed west again on 1 June as a unit of Task Group 51.18, the reserve force for Operation "Forager," the conquest of the Marianas. On D-day plus 1, 16 June, Saufley and the other escorts shepherded their charges into the transport unloading area west of Saipan. Saufley was then reassigned to call fire support duties. For the next month, she continued call fire support, screening, and shore bombardment operations in the Saipan-Tinian area. On 20 July, Saufley moved south for the invasion of Guam. Here, the destroyer provided call fire support for the assault troops. She returned to Tinian on the 23d and supported the landings there on the 24th. For the next week, she provided gunfire support and served on radar picket duty.

Remaining in the Marianas until 12 August, the destroyer then sailed for California, arriving at San Francisco with her squadron, Destroyer Squadron (DesRon) 22, at the end of the month. Overhaul took her into October. On the 26th, she again steamed west.

On 17 November, she arrived at Ulithi Atoll. Proceeding to Leyte Gulf, Saufley soon found herself engaged in antisubmarine action after moving into the Camotes Sea to search for a submarine reported to be in the area. Shortly after entering the area on the 28th, the Japanese submarine was located on the surface off Pilar Point, Ponson Island. In a multi-destroyer gun action involving Saufley, Renshaw (DD-499), and Waller (DD-466), the submarine was sunk 45 minutes later.

Returning to Leyte Gulf, Saufley lost one man and suffered considerable hull damage in an engagement with enemy planes on the 29th. Following repairs at the Admiralties, she proceeded to a 2 January 1945 rendezvous with the Lingayan attack force. Moving into the Sulu Sea on the 7th, Saufley shot down an attacking Japanese aircraft at dusk on the 8th. On the morning of the 9th, the formation stood into Lingayen Gulf. Saufley provided screening services as the assault waves landed in the Langayen area. On the morning of the 10th, Saufley splashed another aircraft, this time a Val attempting to crash the destroyer. Saufley got underway on the 12th to return to Leyte Gulf. From Leyte Gulf, she escorted a convoy to Morotai and returned on the 26th. Sailing for Luzon, Saufley arrived off Nasugbu to support the landing there on the 31st. On 1 February, she sank an attacking Japanese boat. She then commenced call fire support which continued for four days. Saufley then set a course for Subic Bay.

The balance of February and most of March was spent in support operations in the areas of Manila Bay and Mindoro. Saufley participated in amphibious operations at Sanga Sanga (31 March to 4 April) and Jolo (8 to 11 April) where she served as flagship, screening vessel, and call fire support ship.

The next two months found Saufley engaged in escort duties. She participated in the assault against Balikpapan, Borneo, on 1 July. The destroyer returned to Morotai on 22 July. She engaged in escort work between Leyte Gulf and Ulithi until the end of hostilities in mid-August.

In early September, Saufley moved up to the Ryu-kyus and then proceeded to the China coast. She assisted in minesweeping operations in the Yangtze delta area. The destroyer remained off the coast of China until she departed for home on 12 November. Arriving at San Diego at the end of the year, Saufley continued on to the east coast in mid-January 1946. During February, she underwent repairs at the New York Naval Shipyard. In early March, Saufley headed south to Charleston for inactivation.

Decommissioned on 12 June 1946, Saufley remained in the Reserve Fleet for just over three years. Redesignated DDE-465 on 15 March 1949, she was recommissioned on 15 December 1949 and assigned to Escort Destroyer Squadron (CortDesRon) 2, Atlantic Fleet. Within a year, she had participated in two search and rescue operations. The first, in June 1950, was the rescue of 36 passengers from a downed commercial airliner on a Puerto Rico-New York run. The second, in October, was the rescue of a Navy TBM pilot assigned to Palau (CVE-122).

On 1 January 1951, the escort destroyer was reclassified an Experimental Escort Destroyer, EDDE-465, and assigned to experimental work under the control of Commander, Operational Development Force. A unit of DesDiv 601, she was home ported at Key West; and, for the next twelve years, was primarily engaged in testing and evaluating sonar equipment and antisubmarine warfare weapons.

On 1 July 1962, Saufley was redesignated a general purpose destroyer and regained her original designation, DD-465. At the end of that month, she participated in the filming of the movie "PT-109." In September, she resumed test and evaluation work. In late October, she was placed on standby; and, after the proclamation of the Cuban Quarantine, she commenced patrols off the coast of Florida. She continued that duty until 20 November; then returned to Key West. On the 26th, she participated in a Presidential review of the Quarantine Force.

For the next two years, Saufley continued her experimental projects, interrupting those operations only for scheduled exercises, sonar school ship duties; and, in the spring of 1963, assistance in the search for Thresher (SSN-593).

Ordered back to Norfolk in the fall of 1964, Saufley was decommissioned on 29 January 1965. Her use as an experimental ship, however, continued. In 1967, instruments and gauges to register strain and stress of successive explosions were installed; and, in February 1968, as a result of tests, she was sunk off Key West. 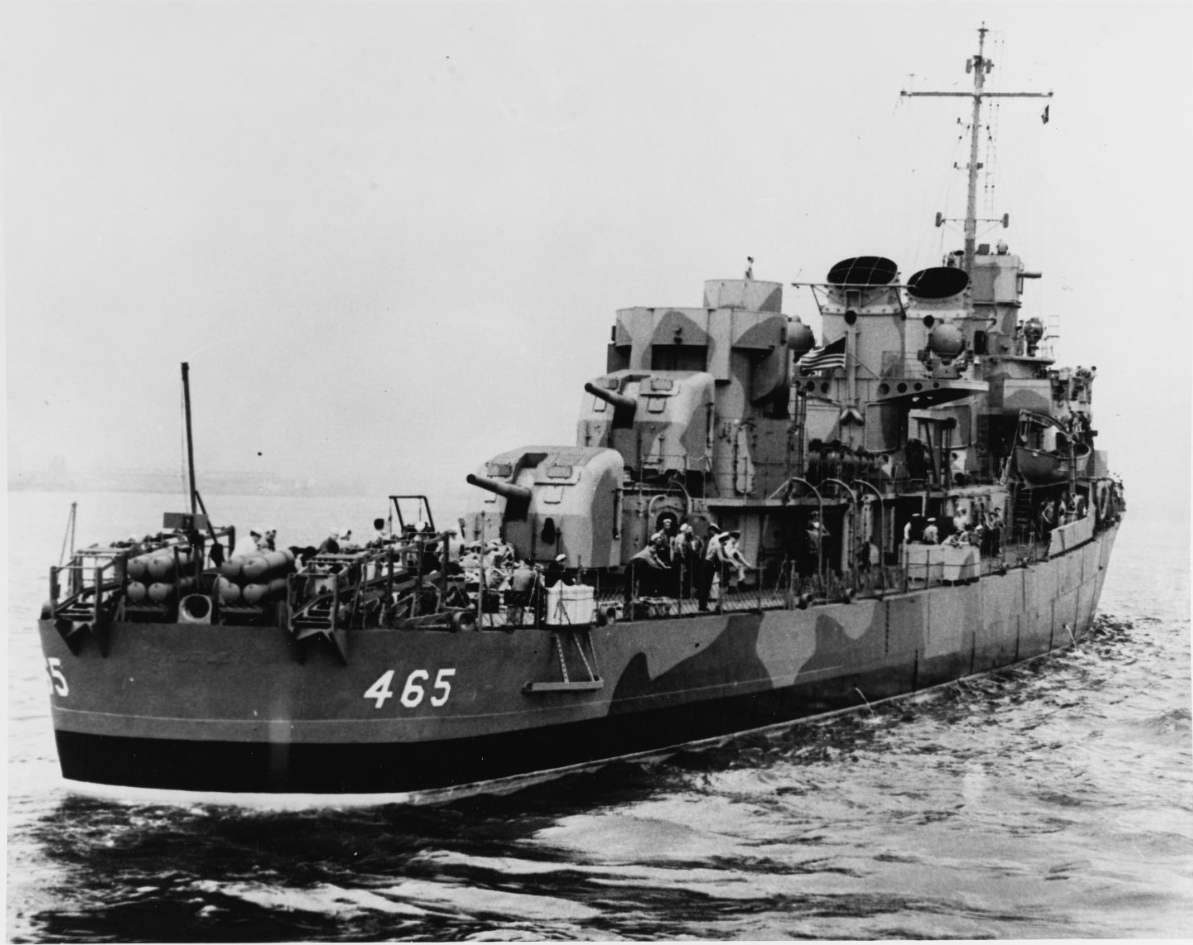