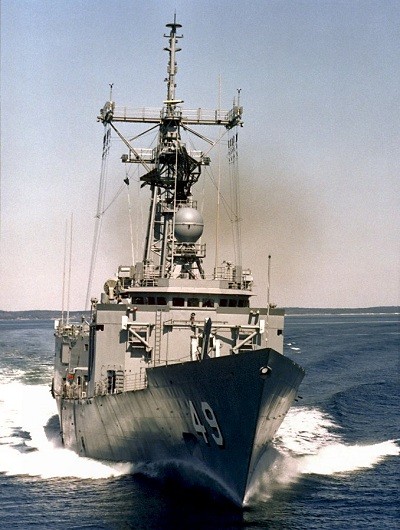 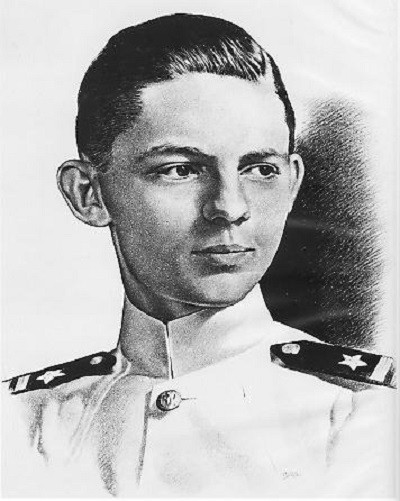 Caption: This sketch of Lt. Robert G. Bradley from the ship’s commissioning brochure captures his pride and determination to serve his country.

Robert Graham Bradley, born in Washington, D.C., on 26 September 1921, was appointed to the U.S. Naval Academy on 9 June 1939, and graduated on 19 June 1942. He completed instruction at the Atlantic Subordinate Command, Service Force, Norfolk, Va. (3 July–27 October 1942), and on 29 October reported to New York Shipbuilding Corp., Camden, N.J., for the fitting out of small aircraft carrier Princeton (CVL 23). He served as a member of the ship’s company when Princeton was commissioned on 25 February 1943, and while on board received promotions to lieutenant, junior grade and lieutenant (1 May 1943 and 1 July 1944, respectively), as she took part in operations ranging from the occupation of Baker Island (September 1943) to the Battle of Leyte Gulf (October 1944).

This sketch of Lt. Robert G. Bradley from the ship’s commissioning brochure captures his pride and determination to serve his country.

While Princeton steamed with Task Group 38.3 (part of Task Force 38) in Leyte Gulf off the east coast of Luzon, Philippines (24 October 1944), a Japanese plane, tentatively identified as a Yokosuka D4Y1 Type 2 [Judy], attacked the ship. Its bomb penetrated the flight, hangar, and main decks and exploded, igniting an inferno that swept across the hangar deck. Explosions rocked the carrier, but Bradley, the ship’s Assistant First Lieutenant, led a repair party and battled the blaze on the second and third decks. Light cruisers Birmingham (CL 62) and Reno (CL 96), and destroyers Gatling (DD 671), Irwin (DD 794), and Morrison (DD 560), also fought the fire.

The intense heat compelled Bradley and his men to abandon their efforts, and after verifying that no wounded men remained behind, he entered the water at 1005, rescued soon thereafter by Morrison. Their success in fighting the fire led many of the men to believe that if they could clear the smoke from Princeton’s largely undamaged machinery spaces, they could raise steam and save the ship.

Bradley thus valiantly returned to Princeton (1300) from Morrison, which lay alongside Princeton’s starboard quarter to play her hoses onto the flames and became temporarily wedged between two of the carrier’s overhanging stacks. A submarine and air alert sounded 30 minutes later and Birmingham and Morrison, the two closest ships, pulled away from Princeton to take their antisubmarine stations. The determined firefighting efforts had nearly controlled the fire, but it raged again during the ensuing lull. Following the alert, Birmingham and Morrison closed and attempted to secure a line to Princeton. The cruiser succeeded on her third try (1515), but the flames touched off four hundred 100 pound bombs stowed aft in the torpedo magazine (1523). The resulting explosion blew off the upper part of the carrier’s stern, killing Bradley and every man in the vicinity.

Birmingham, Gatling, Irwin, and Morrison all sustained damage by rolling against the stricken carrier or by fragments from the explosion of Princeton’s magazines, the detonation devastated Birmingham, which lay alongside the carrier and lost 229 men killed, four missing, 211 seriously wounded, and 215 with minor wounds. In addition, a jeep (used to tow aircraft) fell from Princeton's flight deck, damaging Morrison’s bridge. Reno and Irwin scuttled Princeton.

Bradley had repeatedly risked his life, entering the most dangerous areas below deck to ascertain the extent of the damage and to fight the fires blazing on board. For his “outstanding fortitude, great personal valor, and self-sacrificing devotion to the completion of an extremely perilous task,” as well as his “extraordinary heroism,” Bradley received the Navy Cross posthumously. 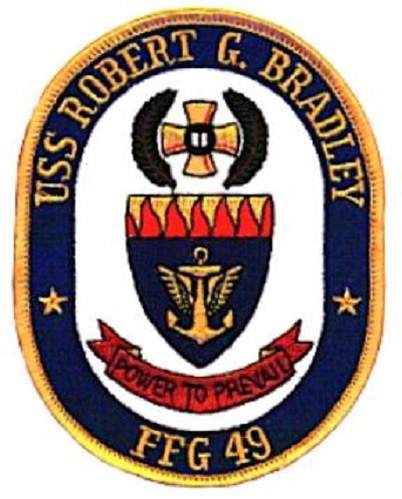 Shield
Gold and dark blue are the colors traditionally associated with the Navy. The winged anchor refers to Lt. Bradley’s service on board small aircraft carrier Princeton (CVL 23) during World War II. The flaming chief symbolizes the damaged inflicted upon Princeton by a Japanese aerial attack during the Battle of Leyte Gulf, and resulting fires which claimed Bradley’s life as he valiantly led a repair party in the effort to extinguish the flames and save the ship.

Crest
The cross is gold, symbolic of excellence and glory, and refers to the Navy Cross awarded posthumously to Bradley for his supreme effort and sacrifice in the battle to save Princeton. The two bars at the center are white for purity and nobility of purpose, recognizing the face that Bradley, although aware of the eminent danger, returned to the abandoned ship a second time with a salvage crew when an explosion touched off by the flames took their lives. The palm branch on either side of the cross symbolizes the courage that Bradley displayed in leading the salvage effort on board Princeton.

Motto:
The motto "Power to Prevail" refers to the capability of Robert G. Bradley to engage and defeat at-sea threats.

Robert G. Bradley has deployed to the Mediterranean (18 August 1986–7 March 1987; 4 November 1994–15 April 1995; and 28 June–21 December 1996); the Mediterranean and North Atlantic (5 January–2 July 1998); and the Middle East Force (Horn of Africa, Persian Gulf, 28 April–28 October 1988). In addition, she has made multiple law enforcement and counter-narcotics deployments to the Caribbean and eastern Pacific, and carried out a number of specialized operations in North American, Latin American, and European waters. The ship also took part in Operation Support Democracy: a UN attempt to restore order in Haiti (September–October 1993). Robert G. Bradley operated off Haiti’s northern coast, tracking an average of more than 150 ships per day. During the ship’s deployments, she normally embarked one or two Sikorsky SH-60B Seahawks of Helicopter Antisubmarine Squadrons (Light) (HSL) 42, 46, or 48.

Robert G. Bradley intercepted fishing vessel Recuerdo, smuggling 9.2 tons of cocaine, in the eastern Pacific (3 August 2001). She subsequently turned over the suspects and their illicit cargo to U.S. and Panamanian law enforcement authorities. Robert G. Bradley then intercepted a go fast carrying 1.2 tons of cocaine (3 September). The ship sank the go fast, and turned over the narcotics and the four smugglers to coastal patrol ship Hurricane (PC 3), which transferred them to U.S. law enforcement authorities. In company with destroyer David R. Ray (DD 971), Robert G. Bradley monitored and boarded fishing vessel Lilliana 1, took the boat under tow when she developed engine trouble, and brought her 13 crewmembers ashore (24 September–5 October). 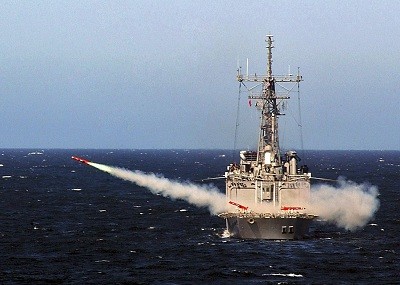 Robert G. Bradley’s (2 June–2 September 2003) counter-narcotics deployment to the Caribbean and eastern Pacific proved especially eventful. The ship operated as the on-scene commander for the search and rescue of fishing vessel Fufu Chen and her nine crewmembers off the Costa Rican coast (17–19 July). Fishing boat Costa del Sol transferred three survivors for treatment to Robert G. Bradley, and fishing vessel Arelis transferred a fourth person. The ship then shifted the survivors to the Costa Rican Coast Guard. Guided missile frigate Rentz (FFG 46) transferred 19 narcotics smugglers she had apprehended to Robert G. Bradley in Panamanian waters, which then turned them over to the U.S. Drug Enforcement Agency (8–13 August).

The ship next intercepted and boarded fishing vessel Llanero, which flew the Nicaraguan flag without proper documentation (26–27 August). Her boarding team discovered 1.85 tons of cocaine hidden in the hold, and apprehended eight smugglers. The inspectors determined that Llanero was unfit for the sea and sank her with GAU-16 fire from Cutlass 472, her embarked Seahawk, and 76 and 25 millimeter gunfire, 40 millimeter grenades, and .50 caliber fire from the ship (6°29'4" N, 83°12'6" W). Robert G. Bradley and a U.S. Coast Guard Lockheed HC-130H Hercules chased a go fast that escaped into Colombian waters and beached herself on the Island de Providencia (30 August). The smugglers fled, but Colombian Coast Guardsmen recovered 1.3 tons of cocaine.

Robert G. Bradley, operating with Destroyer Squadron 14 out of Mayport, Fla., is scheduled to decommission on 3 December 2013.