Commodore Oliver Hazard Perry (1785–1819) was an accomplished naval officer known primarily for his conspicuous contribution to the U.S. Navy’s victory over the Royal Navy during the Battle of Lake Erie on 10 September 1813. The triumph made Como. Perry a national hero and played a crucial role in determining the course of the War of 1812. Five other U.S. naval vessels have borne the name Perry but were named for both Oliver H. Perry and his brother Como. Matthew C. Perry. 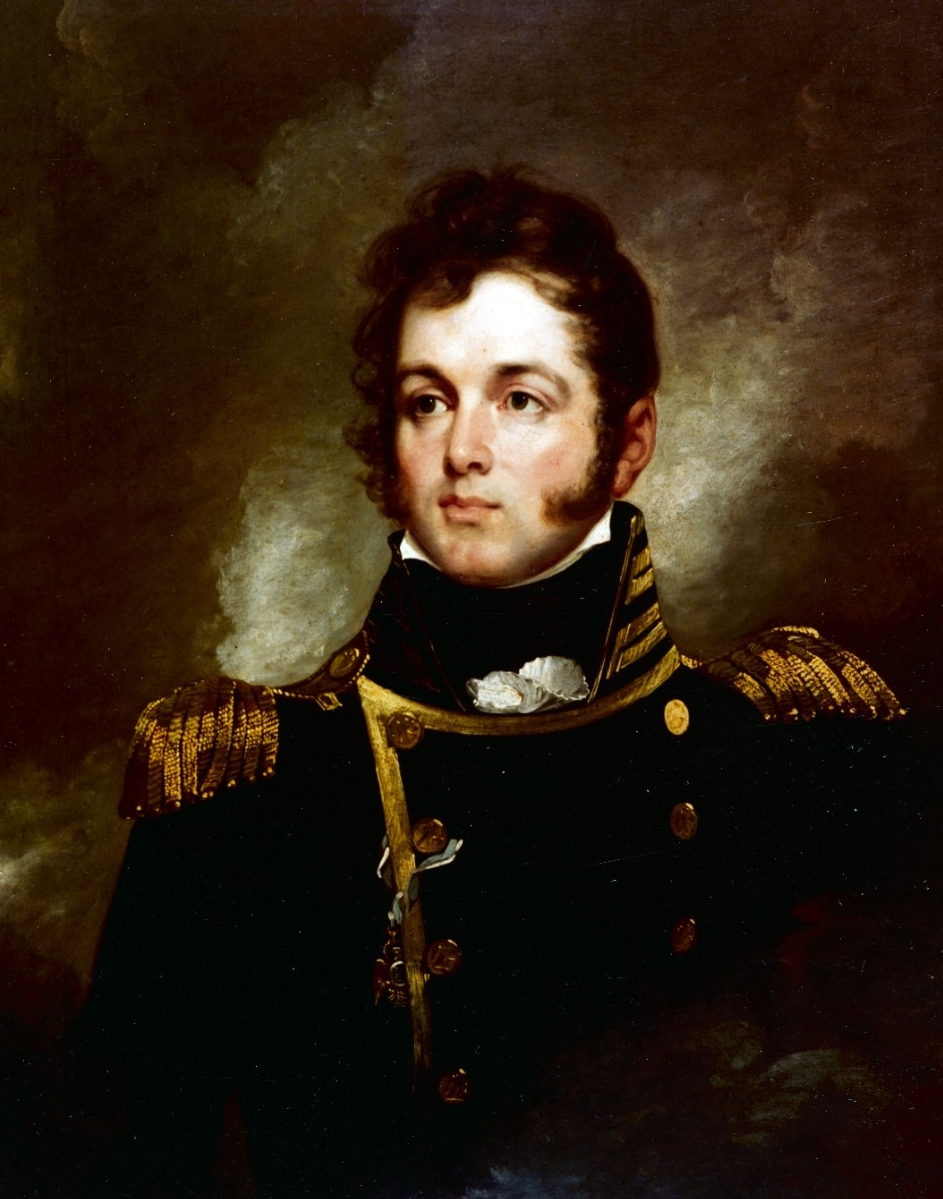 Oliver Hazard Perry was laid down on 12 June 1975, at Bath Iron Works Corp., Bath, Maine; launched on 25 September 1976 and co-sponsored by Miss Morgan Hebard the second great granddaughter of Como. Oliver H. Perry and Mrs. Joyce P. Rumsfeld, the wife of Donald H. Rumsfeld, the Secretary of Defense from 1975 to 1977; commissioned on 17 December 1977, at Bath, Cmdr. Stephen J. Duich, USN, in command.

Oliver Hazard Perry was the product of a U.S. Navy shipbuilding program initiated in 1971 to construct 50 patrol frigates. The project “grew from a continued requirement of the U.S. Navy to control sea lanes and keep them open for the transport of needed military and commercial material.” Eventually designated guided missile frigates, Oliver Hazard Perry was the lead ship of this new class of U.S. naval warships.

Built to provide protection for military and mercantile convoys Oliver Hazard Perry was primarily equipped to detect and attack submarines, neutralize anti-ship missiles and destroy hostile surface ships. She also sported a new, innovative combat system and was designed specifically to reduce the number of personnel required to operate her.

Following commissioning Oliver Hazard Perry commenced a three-month fitting out availability at Bath Iron Works in preparation for an eight-month post-delivery test and trial period. Upon the completion of her trial period in March 1978, the guided missile frigate was homeported at Naval Station Mayport, Jacksonville, Florida, and assigned to Destroyer Squadron Twelve.

During her shakedown in the Caribbean Sea in 1978, Oliver Hazard Perry spent several months undergoing shock trials. The shock tests greatly taxed her steel hull and aluminum superstructure and while she continued to serve the U.S. Navy for years to come the trials left her with lingering damage. 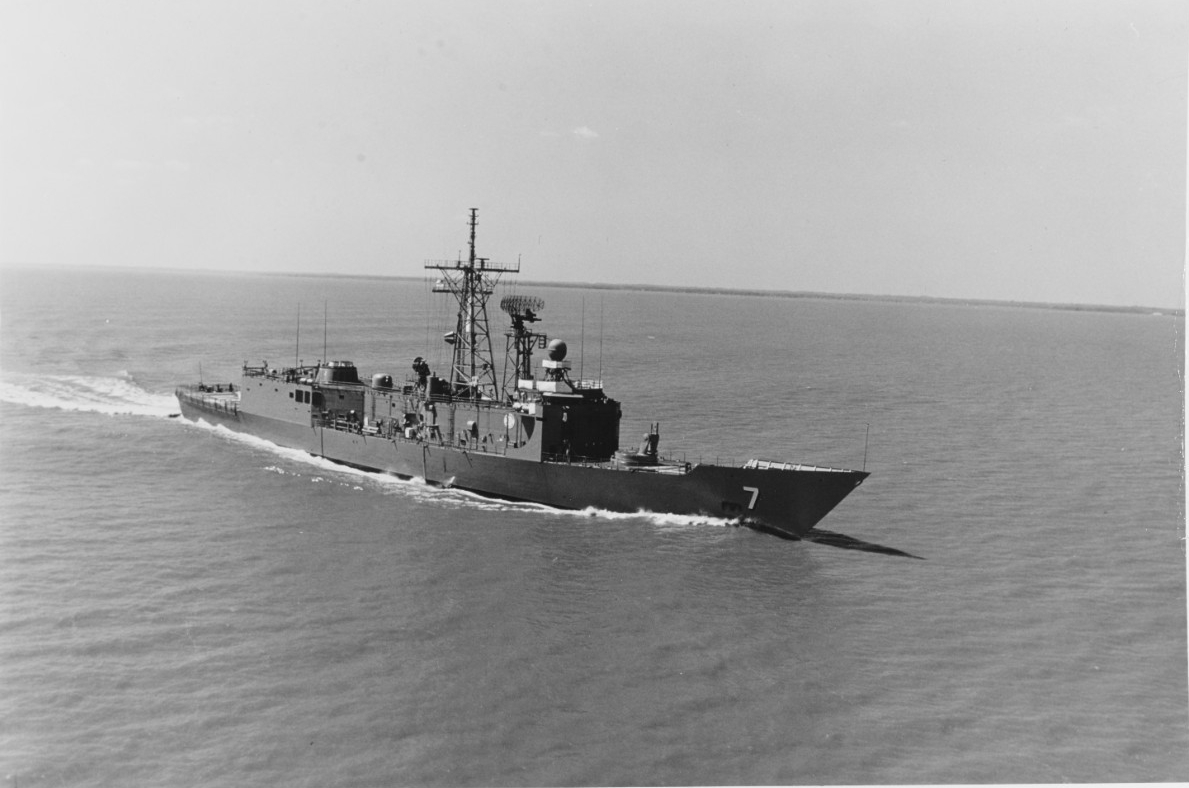 Upon joining the fleet in 1979, Oliver Hazard Perry conducted numerous local exercises and drills before getting underway on 6 August for her first Great Lakes Cruise. Steaming via Newport, R.I., the guided missile frigate arrived in Montreal, Canada on 10 August. Following a full month of goodwill stops the cruise ended on 18 September, with her departure from Quebec, Canada, and eventual return to Mayport on the 22nd.

On 14 July 1980, Oliver Hazard Perry – steaming in company with Task Group (TG) 20.6 – got underway for her first deployment to the Mediterranean Sea. Of primary note during the deployment, in September she participated in National Week 80 Exercise as part of Blue Force. The warship returned to Mayport on 11 December.

In the spring of the following year (13 April 1981), Oliver Hazard Perry began an Underway Material Inspection (UMI), which was notably the “first UMI to take place on board a Perry Class ship.” On the 21st of that same month, the guided missile frigate commenced a Selected Restricted Availably and was again the first ship in her class to do so. On 5 June, the warship also participated in the First Annual DC (Damage Control) Olympics in Mayport and was designated as the overall winner. The following week she got underway for COMPTUEX 3-81.

Oliver Hazard Perry set out on her second deployment to the Mediterranean Sea on 12 August 1981. Upon arriving at her destination, the warship made several transits of the Tyrrhenian Sea and notably participated in the multi-national exercise Display Determination 8. On 6 October 1981, the President of Egypt, Anwar Sadat, was assassinated during an annual parade held in Cairo, Egypt, and Oliver Hazard Perry was subsequently dispatched to an area north of Alexandria, Egypt, as part of the U.S. military response to the incident. Attached to Commander Task Force (CTF) 61, Oliver Hazard Perry helped provide escort services for an amphibious task force led by the amphibious assault ship Saipan (LHA-2). Upon the resolution of the situation in Egypt, the warship returned to her cruise, participating in the French hosted NATO exercise Îles d’Or on 10 November. She returned to Mayport on the afternoon of 21 December, mooring starboard side to pier D-2-1.

On 25 February 1982, Oliver Hazard Perry participated in the joint Canadian-U.S. exercise MARESTOP 82. In August, she experienced an engine casualty and subsequently underwent the “first power turbine change out in the Perry class.”

With heightened tensions in the Persian Gulf (Iran-Iraq War), Oliver Hazard Perry weighed anchor from Mayport on 1 February 1983 for a Middle East deployment. The guided missile frigate arrived at Port Said, Egypt on 17 February and shortly thereafter transited the Suez Canal. Upon entering the Persian Gulf on the 28th, Oliver Hazard Perry took up a radar picket station. Encountering no major incidents of note, she departed the area on 17 June and arrived at Plymouth, United Kingdom, on 12 July. The warship eventually arrived back at Mayport on the 24th.

Oliver Hazard Perry’s homeport was officially changed to Naval Station, Philadelphia, Penn., on 1 April 1984. That summer on 16 June, she became one of the first guided missile frigates to transfer to the Naval Reserve Force, Atlantic Fleet. With her entry into the Naval Reserve, Oliver Hazard Perry began an annual series of Selected Reserve Weekends, fleet trainings, and exercises.

On 19 June 1987, Oliver Hazard Perry arrived in Montreal, commencing another Great Lakes Cruise. A month into the voyage on 31 July, she assisted a U.S. Coast Guard (USCG) group at Sault Sainte Marie, Lake Superior, for a search and rescue mission. On 14 August, the warship also visited the Perry National Monument at Put-in-Bay, Ohio—commemorating the Battle of Lake Erie (1813). Oliver Hazard Perry’s command history reports that “on the way back home,” while standing in at Toronto, Ontario, Canada, a number of demonstrators protested the ship’s visit to the city. The groups included the Toronto Disarmament Network, Veterans Against Nuclear Arms, and Green Peace. It was also noted that an equal number of demonstrators from the Canadian Coalition of Freedom for Peace through Strength were present. The cruise officially ended on 7 September.

In June 1988, Oliver Hazard Perry steamed south to the Caribbean Sea for exercises. In November of that year, she returned to the Caribbean to assist the USCG with law enforcement operations in the area. The warship worked with the USCG again on multiple occasions in the coming years, primarily in counter-narcotics operations.

On 4 June 1991, the guided missile frigate participated in the NATO exercise Ocean Safari 91, off the Virginia Capes. The next month on 22 July, she assisted with the hardening trials for passenger ship Empress II.

In July 1992, Oliver Hazard Perry’s homeport was officially changed to Staten Island, New York. In early February 1993, the warship reported to the southern Caribbean for a counter-narcotics patrol. On 12 March, after getting underway for her homeport she was “enveloped in the largest winter storm to hit the South Atlantic coast in 100 years.” Although she weathered the tempest, Oliver Hazard Perry suffered significant damage. Of particular note, an eight-foot crack appeared along the weld between the main deck and the starboard helicopter hangar.

Accompanied by the guided missile cruiser Gettysburg (CG-64), Oliver Hazard Perry departed Halifax, Nova Scotia, on 28 May 1994 and shaped a course for Kiel, Germany. Upon her arrival in Baltic waters on 6 June, Oliver Hazard Perry became one of the first Naval Reserve ships of the Atlantic Fleet to cross the Atlantic Ocean. Once at Kiel she participated in Baltic Operations (BALTOPS) 94, which included multi-ship and multi-national exercises.

Between 17 and 19 June 1994, Oliver Hazard Perry became one of the first American warships to visit the previously closed off Russian port of Baltiysk, Kaliningrad Oblast. During her visit, a reception was held on board the Russian destroyer Nastoychivyy. On 5 July, Oliver Hazard Perry began the voyage back to the United States, and on the 16th she arrived at her new (and once former) homeport at Mayport, Fl.

U.S. military forces invaded Haiti in September 1994. In the course of those operations, Oliver Hazard Perry maintained anti-aircraft warfare station as part of CTF 185, steaming in the vicinity of Cap-Haïtien, Haiti. Following the capitulation of hostile forces, Oliver Hazard Perry left the area on 30 September and headed back to Mayport. While en route the guided missile frigate observed an unknown aircraft make a “drug drop” in the vicinity of Cay Sal Bank, Bahamas, though a subsequent search with the USCG “resulted in negative findings.”

In May 1996, Oliver Hazard Perry completed a Cruise Missile Tactical Qualification after successfully launching all four of her Harpoon missiles. The achievement was the culmination of a ten-month Command Assessment of Readiness and Training (CART) and Tailored Ship’s Training Availability (TSTA) process. The following month on 14 June, the warship set out on her last Great Lakes Cruise, which lasted through 31 August. Only a week after her return to Mayport Naval Station, Oliver Hazard Perry was forced to evacuate Florida from 4 to 8 September due to the approach of Hurricane Fran.

On 18 November 1996, Oliver Hazard Perry entered “Pre-Strike,” and then on 20 February 1997 after 19 years of service, she was decommissioned at Mayport. She was stricken from the Naval Vessel Register on 3 May 1999.

The ex-Oliver Hazard Perry spent several years in the museum donation category in Philadelphia, pending her potential sale to an organization in Toledo, Ohio, that intended to make her into a museum ship to commemorate the Battle of Lake Erie. However, the transaction was never completed and she was sold for scrap in 2005 to Metro Machine Corp. of Philadelphia.