The first ship of the fleet to be named in honor of the city of Niagara Falls, New York.

Niagara Falls (AFS-3) was laid down on 22 May 1965 at San Diego, Calif., by National Steel and Shipbuilding Co.; launched on 26 March 1966; sponsored by Mrs. Marian A. Javits, wife of Senator Jacob K. Javits of New York; and commissioned at Long Beach [Calif.] Naval Shipyard on 29 April 1967, Capt. Horace C. Holley in command.

Niagara Falls made her maiden deployment during a voyage to Vietnamese waters (28 March-17 October 1968). She supplied more than 30 ships by helicopter, boat, or truck while at Subic Bay, Philippines (14-20 April). Fighting raged across South Vietnam during this period when communist forces struck the allies during the Tet lunar New Year, followed by additional offensives that the allies labeled “Mini-Tet.” Allied troops desperately fought to repel these attacks and required increased amounts of supplies. Niagara Falls consequently reached An Thoi, an island near the Cambodian-South Vietnamese border, on 22 April, and transferred more than 100 tons of material to allied troops ashore. Two days later, she supplied amphibious forces at Vung Tau. Niagara Falls supplied ships at Cam Rahn Bay, and the Naval Support Activity there, on 25 April. She supplied 14 ships of the Naval Gunfire Support Group off the Vietnamese coast (27-30 April), and made several replenishment swings to support aircraft carriers launching air strikes from Yankee Station.

Early on the morning of 4 May, Niagara Falls received a request for emergency medical supplies from an amphibious group off the Demilitarized Zone (DMZ) between the North and South Vietnamese border, which supported a special Marine landing team. Within four hours of receiving the message, the ship delivered 30 tons of medical supplies and other needed items to the group. On 14 June, the ship recovered a USAF drone that crashed offshore of the Philippines. Capt. Andrew F. Huff relieved Capt. Holley as the commanding officer on 31 August. Niagara Falls completed the last replenishment of her deployment late on 15 September, called at Hong Kong (17-21 September), Pearl Harbor, Hi. (9-10 October), and returned to San Diego.

Niagara Falls shifted her home port from San Diego to Sasebo, Japan, on 1 January 1969. The ship deployed to the Western Pacific during the change (3 January 1969-26 September 1970). Her home port shifted again on 30 June 1970, however, from Sasebo to Alameda, Calif., so that she could undergo an overhaul at Mare Island Naval Shipyard, Vallejo, Calif. Niagara Falls, with a UH-46A Sea Knight of Helicopter Combat Support Squadron (HC) 7 Detachment 112 embarked, therefore sailed from Yokosuka, Japan, for her return voyage on 5 September 1970.

The Pacific Fleet sent the ship a message about a missing sailboat and on 15 September, while en route to Pearl Harbor, she sighted a ketch off her port bow, about 400 nautical miles west/northwest of Hawaii, near 24°45'N, 164°44'W. Niagara Falls investigated, passed the stern of the boat, and identified her as the ketch Galilee. She dispatched a boarding party, who rescued artist Julian Ritter and crewmembers Winifried Heiringhoff and Lauren Knox. The emaciated mariners stated that they had been adrift without food for 49 days, and the boarders transferred them to the ship for food and medical treatment. The ship’s medical officer examined the castaways and reported that they suffered from starvation and dehydration and lost a collective total of 120 pounds. He estimated that they would not have lasted another four days. Six men from Niagara Falls de-watered Galilee, and she then towed the ketch 150 miles to rendezvous with Coast Guard patrol boat Cape Corwin (WPB-95326) on 16 September. Cape Corwin took the castaways and their sailboat to Oahu.

While riding out Typhoon Rose at Hong Kong on the night of 16-17 August 1971, store ship Regulus (AF-57) grounded on Kau I Chau Island, ripping open her hull. Niagara Falls, in the midst of a deployment to the Western Pacific, received an urgent message to assist Regulus and sailed at high speed for Hong Kong. Niagara Falls offloaded stores, issue, and personal belongings from the crew of the grounded ship (20-28 August). Her Sailors spent nearly 10,000 man hours salving Regulus, and Niagara Falls transferred 436 pallets of material to Subic Bay. After three weeks of attempting to refloat Regulus, the salvors decided that the damage she incurred proved too severe to warrant salvage. Consequently, Regulus was decommissioned on 10 September, and subsequently stricken from the Naval Vessel Register.

Niagara Falls moored to a buoy at Hong Kong during a visit to the bustling port on 28 October 1971. At about 0300 on 1 November, an arsonist set a fire in the after-cargo handling area. The blaze caused extensive damage, but the ship’s historian reported that his fellow crewmen acted “rapidly and efficiently, with undisputed courage,” and extinguished the inferno by 0500. Niagara Falls completed repairs at Subic Bay (2-15 November). The ship shifted her homeport to Guam as a forward deployed vessel to support the Pacific Fleet on 6 September 1983. 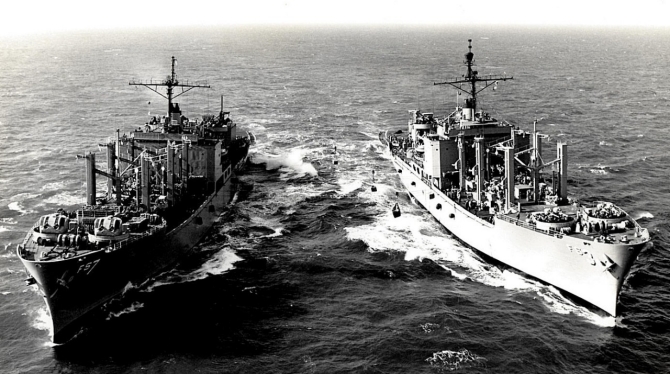 Niagara Falls (right) transfers food to combat store ship San Jose (AFS-7) in the Gulf of Tonkin, 20 November 1971. She uses four Standard Tension Replenishment Alongside Method (STREAM) rigs and a helicopter to deliver more than 300 pallets of general, chilled, and frozen food to San Jose, before Niagara Falls comes about from the Western Pacific. San Jose observes that the “high quality of professionalism utilized to complete such an operation, on a daily basis, is dramatically illustrated by this photograph.” (San Jose (AFS-7), submission for All Hands, Pers-P31, Niagara Falls (AFS-3), Ships History, Naval History & Heritage Command)

In the wake of the Iraqi invasion of Kuwait on 2 August 1990, a coalition that eventually comprised 29 nations initiated Operation Desert Shield , a UN sanctioned economic blockade of Iraq. After Iraqi leader Saddam Hussein refused to remove his forces from the invaded country, the coalition subsequently launched Operation Desert Storm , the liberation of Kuwait. Niagara Falls deployed for these operations in what became the Persian Gulf War I (31 December 1990-30 June 1991).

Whenever possible, the ship loaded supplies at Jebel Ali, Saudi Arabia, a laborious process that took her crewmen up to three days to accomplish. She then made for Bahrain, replenishing vessels while en route. The stores in Bahrain usually consisted of fresh fruit and vegetables, and required a day to load. Niagara Falls then customarily sailed northward courses, escorted by a coalition destroyer or frigate, and made for areas as far northward as the directives allowed for her safety, thus allowing the ships that she replenished to minimize their time off station. Lookouts required constant vigilance because of the treat of mines, and the ship assisted in detonating four mines during her deployment.

A fire broke out on board Sri Lankan registered merchant ship Mercs Horana in the central Persian Gulf on 29 March 1991. Ammunition ship Shasta (AE-33) steamed 20 miles from the area but came about, and one of her Sea Knights provided two triwalls of fire-fighting equipment to frigate Francis Hammond (FF-1067), which, along with British frigate Brilliant (F.90), reached the area before the ammunition ship. The flames quickly spread and engulfed the superstructure, however, by the time Shasta arrived about one hour later. Shasta dispatched four fire-fighting teams of 70 sailors in two 33-foot boats, that shuttled people and equipment throughout the night. Four female sailors took part in the two initial fire parties the ship sent to Mercs Horana, and a total of eight American women participated in the multinational effort, the British also (reportedly) employed women firefighters. Niagara Falls and Spanish frigate Victoria (F.82) reached the area later and took part in battling the blaze. Niagara Falls provided damage control equipment and supplies to assist in the rescue. Brilliant principally fought the fire on the merchantman’s starboard side, and Victoria to her port. After these ships fought the conflagration for nearly 24 hours (into mid-morning), Brilliant took Mercs Horana in tow for salvage, to prevent the stricken ship from becoming a hazard to navigation.

Mount Pinatubo on Luzon in the Philippines erupted on 12 June 1991. Typhoon Yunya added to the devastation when it slammed inland with fierce winds and rain. The eruption and typhoon killed more than 300 people and displaced more than 300,000. Niagara Falls reached Phuket, Thailand, for a scheduled four-day visit (15-18 June), when the Pacific Fleet tasked her on the fourth day (18 June) to support Operation Fiery Vigil , the evacuation of victims. The ship sailed and two days later loaded stores at Singapore. Niagara Falls replenished ships involved in Fiery Vigil (24-26 June). Volcanic ash covered the ship in a fine layer that her crewmen described as reminiscent of freshly fallen snow. The other ships that took part in the relief effort included aircraft carriers Abraham Lincoln (CVN-72) and Midway (CV-41), and ships from Amphibious Readiness Group Alpha, led by amphibious assault ship Peleliu (LHA-5). Abraham Lincoln transported 4,323 people including Navy and USAF dependents from Subic Bay, NAS Cubi Point, and Clark AB to Cebu City, Cebu, for further evacuation to Guam and the continental U.S. Filipino looters compounded the tragedy when they ransacked the abandoned homes, stealing treasured family mementoes.

Niagara Falls was decommissioned and placed in service as USNS Niagara Falls (T-AFS-3) with the Military Sealift Command (MSC) on 23 September 1994. She ran aground while sailing from Malakal Harbor, Palau, at 1300 on 27 October 2005. The crew transferred fuel and cargo aft within the ship, reducing the weight of her forward area. During the afternoon high tide at 1620 on 29 October, Niagara Falls freed herself with the assistance of a local tug. The ship did not report casualties or leakages. 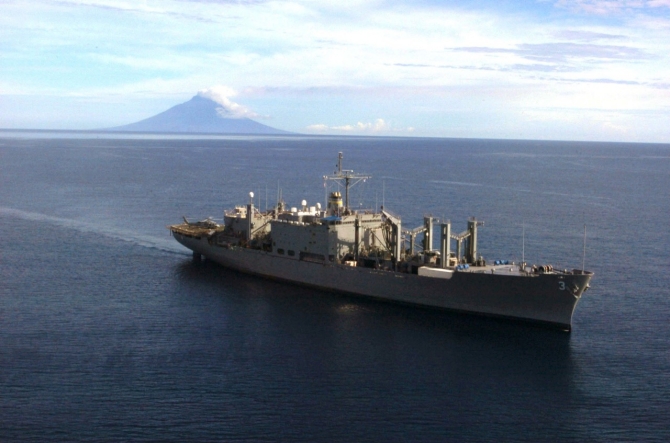 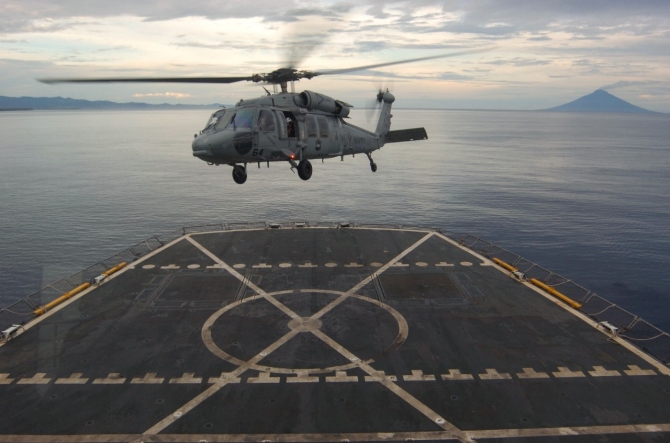 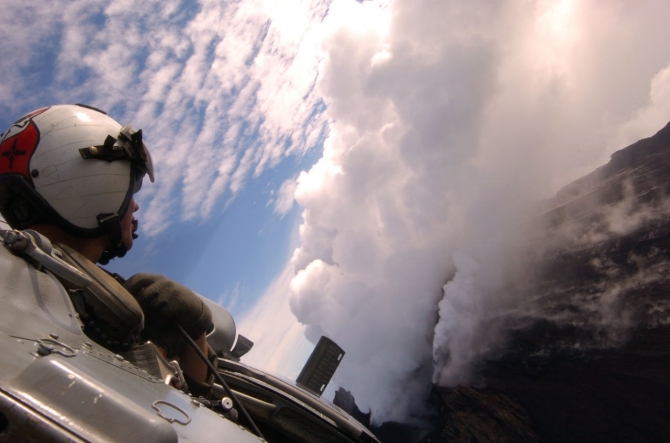 The ship was inactivated and laid up at the Naval Sea Systems Inactive Ships Maintenance Facility, Pearl Harbor, pending disposal, on 30 September 2008. Salvage ship Salvor (T-ARS-52) towed Niagara Falls from Pearl Harbor on 12 July 2012, to participate in RimPac 2012. Forty ships and submarines, and more than 200 aircraft and 25,000 people, from 22 nations, took part in the exercise in and around the Hawaiian Islands, principally near the Pacific Missile Range Facility Barking Sands (29 June-3 August). At 1131 on 14 July 2012, the allies sank Niagara Falls with UGM-84 and RGM-84 Harpoon antiship missiles, GBU-10 and GBU-32 laser-guided bombs, and 30 millimeter gunfire at 23°N, 159°55'W, in waters 15,480 feet deep, 63 nautical miles southwest of the coast of Kauai, Hawaii.