A volcanic peak in the Cascade Range of the State of Washington. 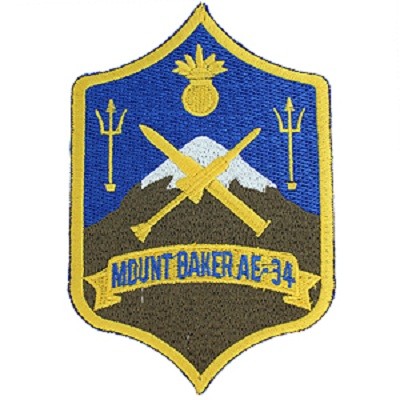 The shield itself is derived historically from when men carried individual shields to protect themselves from the arrows and spears of the enemy. The rope around the three sides of the shield represents the integrated concept of mobility, support, and endurance of the Service Force. The two tridents represent the long standing tradition of marines throughout the world; the two tridents are also a carryover from the shield of the first Mount Baker (AE-4), and pay tribute to the fine heritage and reputation that she bequeathed to the second Mount Baker (AE-34). The ordnance insignia is an old insignia that traditionally represents ordnance: ammunition. The crossed missile and shell portray Mount Baker’s combined mission of delivering both missiles and conventional rounds to the fleet. The mountain in the background represents the ship’s majestic namesake in Mount Baker National Forest (renamed Mount Baker-Snoqualmie National Forest in 1974), Wash.

Mount Baker took part in the Chief of Naval Operation’s Priority 1 evaluation of the Light Airborne Multi-Purpose System (LAMPS) Mk III, in the Atlantic Ocean (2–14 November and 29 November–10 December 1976). LAMPS vans augmented the ship’s Combat Information Center, and specialized antennas and their associated equipment temporarily transformed her from an ammunition ship to a research vessel. At times during that period, Mount Baker operated with ocean minesweepers Alacrity (MSO-520) and Assurance (MSO-521).

At approximately noon on 9 November 1976, Mount Baker passed close by 12-meter yacht Sunrise, as the latter headed southeasterly in moderate seas about 375 miles east of Charleston. Sunrise did not appear to require assistance and the ammunition ship continued. The yacht contacted the Coast Guard, however, requesting assistance for Jay Decheslere, her master, who suffered from a severe strain of his lower back, abdomen, and left arm from the sea furiously tossing him about. At dawn on 10 November, Mount Baker learned that merchant steamer Torino had rescued the yachtsman, and without receiving further word, the ammunition ship came about and made for the area, proposing an at-sea transfer by motor whaleboat. The winds and sea slightly abated but continued to impede the rescue. Mount Baker rendezvoused with Torino and both ships turned northward, to create a lee for launching the boat. Mount Baker’s Master Chief Boatswain’s Mate William C. Robinson led the boat crewmen, and Hospital Corpsman 3d Class Joseph Forbes and Seaman Steven Coccia assisted Decheslere into the boat, which then returned him to the ammunition ship for immediate medical treatment. Mount Baker steamed rapidly to the northwest and rendezvoused with a Coast Guard helicopter that flew the patient ashore to Marine Corps Air Station Cherry Point, N.C., for further treatment.

The presence of what appeared to be a Soviet submarine entering the training area on 8 December 1976 compelled the Atlantic Fleet to postpone the LAMPS III exercise until the following day. Helicopters flew 92 planned missions totaling 200 hours of flight time from Mount Baker’s deck during the evaluations. The evaluators calibrated the LAMPS III system with the use of a target submarine.

Mount Baker came about for possible assistance to NR 1, a nuclear-powered, deep-submergence, research and ocean-engineering vehicle, and submarine rescue ship Sunbird (ASR 15), on 10 December 1976. The following day, she took station on Sunbird, in company with Kittiwake (ASR-13) and attack submarines Batfish (SSN-681) and Narwhal (SSN-671). Mount Baker completed her assistance on 15 December, and returned to spend Christmas at Pier B Naval Weapons Station Charleston. 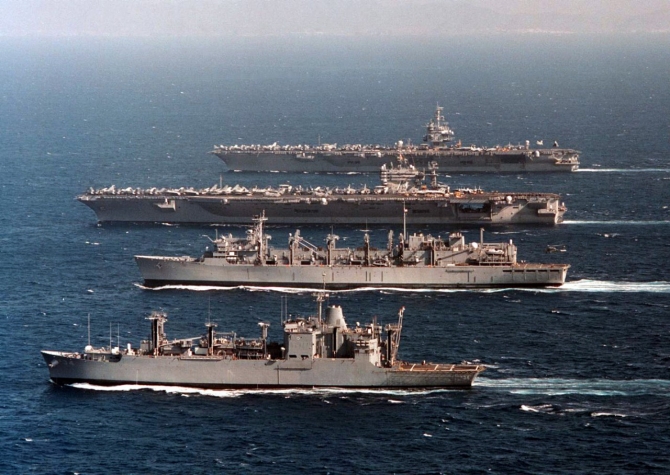 Mount Baker was decommissioned and placed in service with the Military Sealift Command at on 18 December 1996. Simultaneously placed out of service and stricken from the Naval Vessel Register on 2 August 2010, the ship was transferred on 23 July 2012 to the Maritime Administration (MARAD). She lay moored at the Naval Inactive Ship Maintenance Facility in Philadelphia, Pa., until she was scrapped. On 30 November 2012, MARAD announced that she was disposed of by “scrapping and dismantling.”