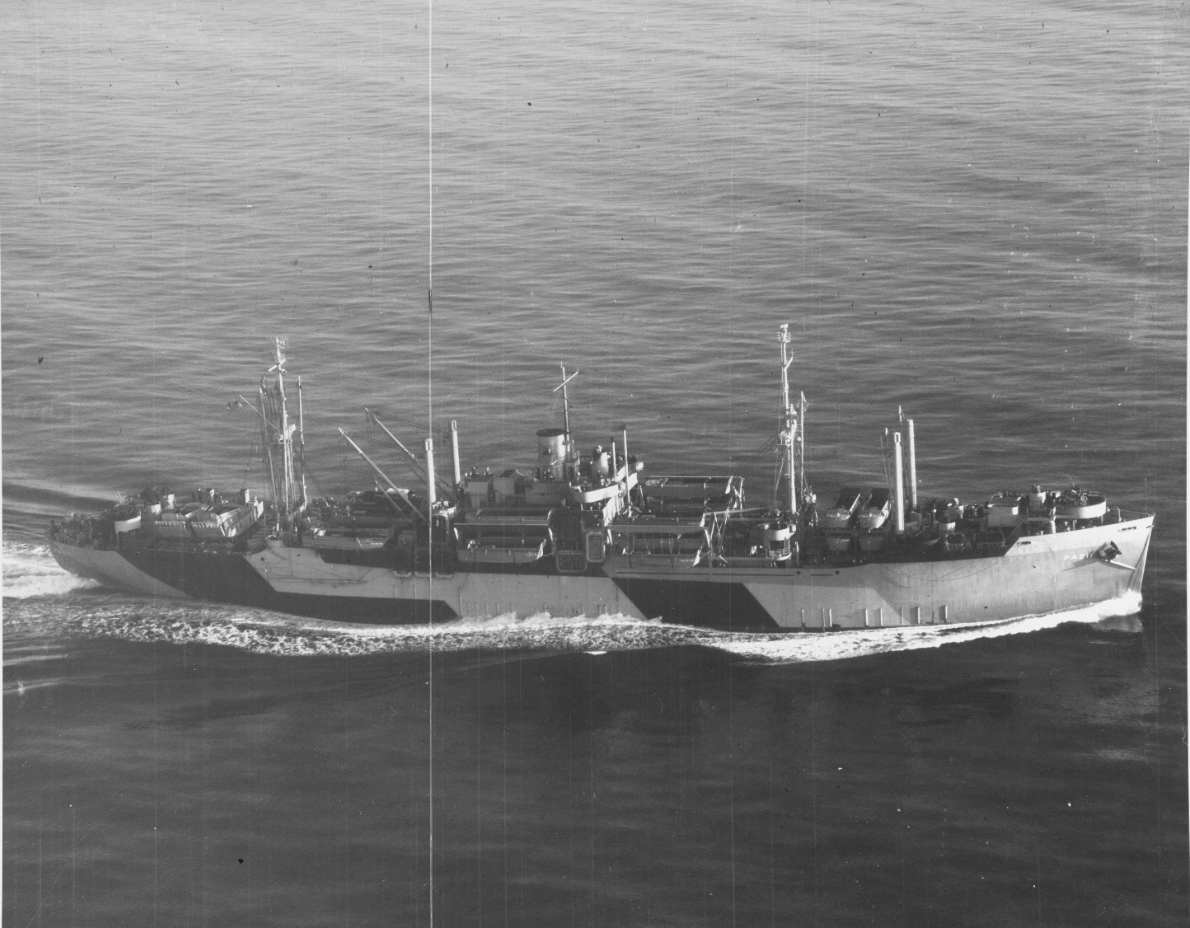 A county in western Montana.

After shakedown along the California coast, Missoula steamed from San Francisco to Pearl Harbor 6 to 12 December. She trained in Hawaiian waters during the next 6 weeks; thence, with units of the 5th Marines embarked, she sailed 27 January for the scheduled invasion of Iwo Jima. Among her troops she carried the dozen men who on two separate occasions raised the American flag atop Mount Suribachi during bitter fighting 23 February. Assigned to Transport Squadron 16, she steamed via Eniwetok to the staging area at Saipan, where she completed final preparations for the invasion.

Missoula sortied with Rear Adm. H. W. Hill's TF 53 on 16 February. She reached the transport area off Beach Green 1 before dawn 19 February, lowered her landing boats, and at 0725 began debarking troops for the assault. As Marines stormed the beaches and began the struggle for Iwo Jima, Missoula sent ashore troops and cargo from her position about 3,000 yards offshore. Late in the afternoon she departed the transport area for night cruising at sea; thence, she returned the following morning and resumed unloading operations. During the next 5 days she continued this pattern of operations.

While operating in the transport area 23 February, she received the following message at 1035: "American flag now flying on Mount Suribachi Yama." Marines from the 28th Regiment had raised the colors from the summit at 1020. That flag, the first of two which flew from Suribachi that day, had come from Missoula. The adjutant of the 2d Battalion, 28th Marines, had brought the small set of colors from the attack transport during the invasion.

In addition, Missoula provided medical facilities for casualties of the fierce fighting ashore. Her four surgical teams treated 100 stretcher and ambulatory cases, 59 of whom were brought on board during the first day. After embarking a final group of casualties, she sailed in convoy for Saipan 25 February. The following morning one of the convoy escorts, Finnegan (DE‑307), detected, depth-charged, and sank Japanese submarine I‑370. Missoula arrived Saipan 28 February; and, after debarking the wounded Marines, she sailed for the New Hebrides with Transport Squadron 16 on 5 March.

Steaming via Tulagi, Missoula reached Espiritu Santo 15 March and there embarked 1,177 Army troops of the 27th Division. She departed with other transports the 25th, touched at Ulithi 3 April, and arrived off the western beaches of Okinawa 9 April. During the next 5 days she discharged men and supplies and embarked 143 casualties of the Okinawa campaign; thence, between 14 and 18 April she steamed to Saipan.

For much of the next month Missoula operated out of Ulithi after which she headed for troop training exercises in the Philippines. She arrived Subic Bay, Luzon, 31 May, and during the closing weeks of the war against Japan, she took part in preparing Army troops for a possible amphibious invasion of Japan. Following the atomic holocausts over Hiroshima and Nagasaki, the Japanese ended hostilities 15 August; thence, Missoula supported the movement of occupation troops into Japan.

As part of TF 33, Missoula departed Subic Bay 27 August. She entered Tokyo Bay on the morning of 2 September and began debarking troops of the 1st Cavalry Division at 0951. Less than an hour before in another part of the bay, the Japanese Foreign Minister, Mamoru Shigemitsu, had signed the Instrument of Surrender on board Missouri, thus officially ending World War II.

Missoula returned to the Philippines 4 to 11 September and embarked additional occupation troops at Zamboanga and Mindanao. Departing Leyte Gulf 22 September, she arrived Okinawa the 25th and on 3 October sailed for the Inland Sea. Between 6 and 11 October she debarked troops for the occupation of the rubble that was once Hiroshima. She returned to Okinawa 13 October and joined in the mighty task of returning veterans of the Pacific campaigns to the United States.

With 1,923 troops embarked, Missoula sailed the 17th and arrived San Francisco 1 November. She departed on a second -Magic Carpet- run 21 November and on 6 December embarked 2,060 soldiers at Okinawa. She steamed to Tacoma, Wash., 8 to 21 December; thence, she returned to the western Pacific 21 January 1946 for further trooplift duty. She carried 692 men of the 2d Marine Air Wing from Okinawa to Yokosuka early in February, embarked more than 2,000 veterans at Okinawa and Guam later that month, and departed Guam for the west coast the 22d. Missoula reached San Francisco 5 March, discharged her passengers, and completed her "Magic Carpet" duty.

Assigned to the 19th Fleet 9 April, Missoula operated in the San Francisco Bay area during the next 5 months. She decommissioned at Port Chicago, Calif., 13 September 1946 and entered the Pacific Reserve Fleet at Mare Island. Her name was struck from the Navy list 1 October 1958. She transferred to the Maritime Administration the same day and was assigned to the National Defense Reserve Fleet. Into 1969 she is berthed in Suisun Bay, Calif.