A city in southwestern Tennessee, so named because it is situated upon the Mississippi River in a manner similar to the capital city of ancient Egypt on the Nile. In the Civil War, Memphis fell to Union naval forces led by Flag Officer Charles H. Davis on 6 June 1862, and became an important Federal base for the rest of the war. The first Memphis retained her merchant name. 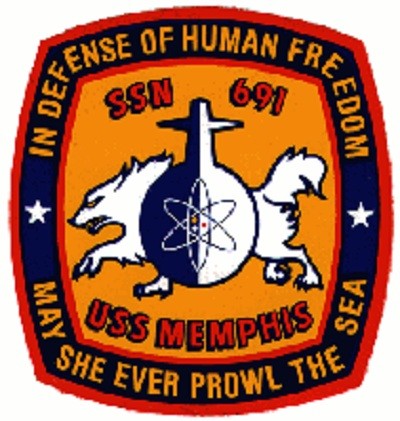 The basic shape of the attack submarine’s crest derives from the outline of the seal of the city of Memphis. The wolf behind the outline of Memphis represents nobility, ferocity, and the ability to “protect its own.” The inspiration for the wolf originates from remarks that Senator Howard H. Baker, Jr., of Tenn., made during the boat’s keel-laying that she would “prowl the sea.” It is a white wolf, symbolizing the creature’s uniqueness. The blue and gold colors traditionally represent the Navy. 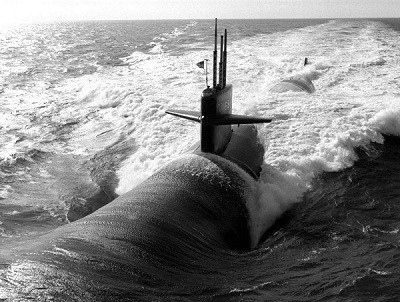 Memphis, Cmdr. James W. Davis, Jr., in command, completed a global circumnavigation (9 September 1980–7 March 1981). She set out from Norfolk, crossed the Atlantic to the Mediterranean, visited Naples, Italy, and carried out additional operations before tasking directed her to make for the Indian Ocean on 20 October. The attack submarine did not pass through the Suez Canal but sailed through the Strait of Gibraltar, crossed the equator west of Africa, rounded the Cape of Good Hope, and accomplished upkeep alongside submarine tender Emory S. Land (AS-39) at Diego Garcia, British Indian Ocean Territory. She completed her maintenance on 7 December, and then participated in antisubmarine operations under the operational control of Commander Task Force 74 into the New Year. Memphis underwent repairs alongside repair ship Jason (AR-8) (29 January–1 February 1981). She then visited the Royal Australian Navy’s Fleet Base West at Garden Island, Perth, Australia (6–11 February). The boat crossed the equator a second time, passed through the Panama Canal (2–7 March), and returned to Norfolk following a voyage of more than 50,000 miles.

In addition to her primary attack (antisubmarine) role, Memphis was designated as a research and development boat for “submarine applications” (1990–91).

Memphis, assigned to Submarine Development Squadron 12 at New London, Conn., carried out her final deployment during a voyage to European waters (10 January–2 March 2011). The boat stalked aircraft carrier Enterprise (CVN-65) and guided missile cruiser Leyte Gulf (CG-55) during an encounter exercise in the Atlantic on 28 January. She completed repairs to her towed array system and to the ring laser gyro navigation system at Rota, Spain (31 January–2 February). Memphis operated as the opposing force against NATO ships and aircraft in the Mediterranean near Sicily during exercise Proud Manta on 4 February. Memphis was decommissioned on 20 January 2012.