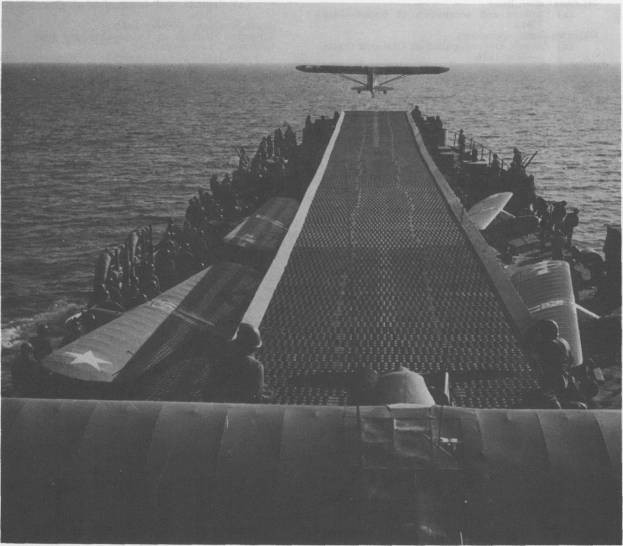 Caption: An Army Piper L-4 Cub artillery observation plane takes off from an LST at Anzio, 1944. LST-386 had an improvised "flight deck" installed in 1943 and flew off four such planes during the landing on Sicily. Later LST modifications, like this one, could carry up to 10 planes and supported the Anzio landing and the invasion of southern France. During 1944, LST-776 evaluated an experimental catapult for launching light planes, as well as Brodie gear. In this system, a cable was stretched between booms to one side of the ship, and planes were launched from a quick-release trolley. LST-776 operated Marine OY-1's over Iwo Jima and Army L-4's at Okinawa. Helicopters began to operate from LST decks in 1949 as they continue to do today.

During World War II, LST-386 was assigned to the European theater and participated in the following operations:

LST-386 was transferred to the United Kingdom on 9 December 1944. She was struck from the Navy list on 15 October 1946. The ship was decommissioned and returned to United States Navy custody on 10 December 1946. On 5 June 1947, she was sold to Frozen Foods, Scotland, and converted for merchant service.