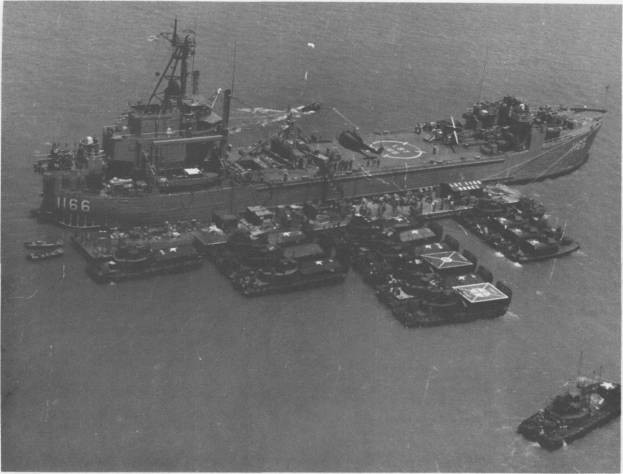 Caption: Washtenaw County (LST-1166) tends river patrol craft in Vietnam. Her crew has christened the pontoon barge moored alongside the "LST 1166 Annex." Four other LST's were formally redesignated Patrol Craft Tenders (AGP) during the period between 1970 and 1972.

Assigned to the Amphibious Force, Atlantic Fleet, LST-1166 conducted operations off the east coast of the United States with one deployment to the Mediterranean in 1956. Earlier, on 1 July 1955, she was re-designated Washtenaw County (LST-1166) (q.v.) after a county in Michigan. Transferred to the Pacific Fleet Amphibious Force in 1958, Washtenaw County was later homeported in Yokosuka, Japan, in 1960. Commencing in 1964, the tank landing ship performed extensive service in the Vietnam theater. Inactivated in August 1973, Washtenaw County was struck from the Navy list on 30 August 1973.