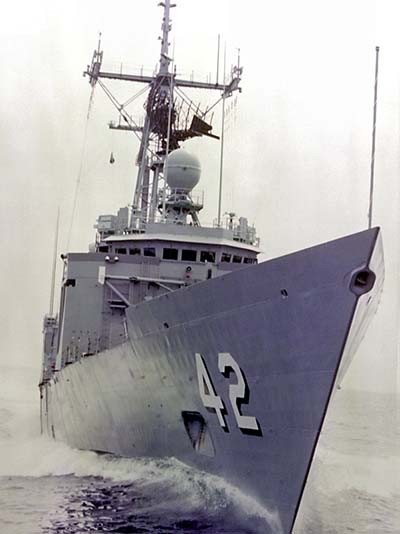 Klakring completed a Light-Off Examination on 8 September 1983, followed on 15 September by her Initial Crew Certification. The ship reached her initial home port of Charleston, S.C., on 18 September. Family members and friends on the pier displayed homemade banners while they welcomed the ship as she maneuvered up the Cooper River on 28 September.

The ship sailed for her shakedown cruise to Caribbean waters. She visited St. Thomas, Virgin Islands (4–7 November 1983), and on 13 November put into Guantánamo Bay, Cuba. Klakring sailed on 3 December, carried out a Weapons Systems Accuracy Test at Port Everglades, Fla., and then test fired torpedoes on the range at Atlantic Undersea Test and Evaluation Center (AUTEC), St. Andros Island, on 13 December. She returned to Charleston on 16 December.

Klakring carried out additional training during the New Year 1984, including a visit to Nassau, Bahamas (27–30 January 1984), a brief stop for fuel in Frederiksted, St. Croix, Virgin Islands, and another port visit on 18 February to NS Roosevelt Roads, Puerto Rico. Klakring completed her Post Shakedown Availability at Bath (5 April–23 August). The yard work included the installation of fin stabilizers. The ship conducted her sea trials on 29 September, and on loaded weapons from Norfolk, Va., on 7 September. Hurricane Diana swept up the East Coast and delayed the frigate’s return to Charleston from her scheduled date of 11 September to 16 September. The ship completed a variety of training during the succeeding weeks, and escorted aircraft carrier Nimitz (CVN-68) during mid November.

Klakring sailed for nearly five weeks of Refresher Training off Guantánamo Bay on 14 January 1985. On 21 February, Helicopter Antisubmarine Squadron (Light—HSL) 42 Detachment 3, equipped with a single Sikorsky SH-60B Seahawk Light Airborne Multi-Purpose System (LAMPS) Mk III, embarked on board Klakring. The ship began participation in her first major fleet exercise, Composite Unit Training Exercise (COMTUEX) 2-85, on April 22 1985. She broke the training with a three-day visit to Fredericksted, and returned to Charleston on 8 May.

Klakring passed southbound through the Suez Canal on 25 and 26 June 1985. As the ship crossed the Red Sea, she began to observe the weekends on Thursdays and Fridays to assimilate crewmen to Muslim daily routines. Klakring fueled and provisioned at Djibouti, Horn of Africa, on 30 June. On 1 July, she rendezvoused with guided missile destroyer Charles F. Adams (DDG-2) and exchanged information and equipment. Whalig became Commander Task Unit (CTU) 109.1.2, and oversaw the scheduling of all multi-ship training in the Persian (Arabian) Gulf. Klakring sailed through the Strait of Hormuz, and on 7 July rendezvoused with command ship La Salle (AGF-3) near Abu Dhabi, United Arab Emirates (UAE). The frigate escorted the flagship to Sitrah, Bahrain.

During the ship’s first two months in the Persian Gulf, visibility averaged barely two nautical miles because of haze, sand, and dust. The daily temperature repeatedly rose to 117ºF with 90% humidity. The frigate’s Seahawk flew an average of two sorties per day, and the crew reported that the presence of the strong temperature inversion made radar ranges of 160 nautical miles at altitudes below 500 feet common, which extended the helo’s patrol coverage of the region.

The ship next visited Al Jubayl, Saudi Arabia (14–17 July 1985), briefly patrolled the Persian Gulf, and then completed upkeep at Mina Sulman, Bahrain (22–31 July). On 6 August, Klakring escorted La Salle, and fueled and provisioned at Sitrah on 20 August. The frigate sailed from the Persian Gulf, and (25–28 August) visited Karachi, Pakistan. She passed through the Strait of Hormuz into the Persian Gulf on 31 August, and completed an additional upkeep at Dubai, UAE (3–10 September). The shipanchored at Sitrah for a Combat Systems Groom (13–15 September). On 20 September, she sailed from the Persian Gulf and trained with the Indian Ocean Battle Group, focusing on aircraft carrier operations, anti-air warfare, underway replenishment, and antisubmarine warfare. Klakring returned to the Persian Gulf on 24 September, training along the way with French sloop Quartier-Maître Anquetil (F.786).

After topping off her fuel and provisions on 26 October 1985, Klakring made for Ash Shuaibah, Kuwait, as the flagship for Commander Middle East Force. The ship patrolled the Persian Gulf, and completed upkeep at Mina Sulman (30 October–4 November). Guided missile frigate Gallery (FFG-26) relieved Klakring in the Persian Gulf on 6 and 7 November. On 9 November, Klakring rendezvoused with Comte de Grasse and the two ships formed a transit group back to the United States. Comdr. Wahlig again served as OTC for the group.

Klakring fueled and provisioned at Djibouti on 11 November 1985, and continued northward across the Red Sea, returning to the standard workweek when she reached the southern entrance to the Suez Canal on 15 November. The following day, both ships transited the canal northbound, and visited Malaga, Spain (20–23 November). On 24 November, Klakring fueled and provisioned at Rota on 24 November, and that same afternoon entered the Second Fleet. Klakring celebrated Thanksgiving in Ponta Delgada, and returned to Charleston on 6 December 1985. On 12 December, Comdr. James M. Coon relieved Comdr. Wahlig as the commanding officer. 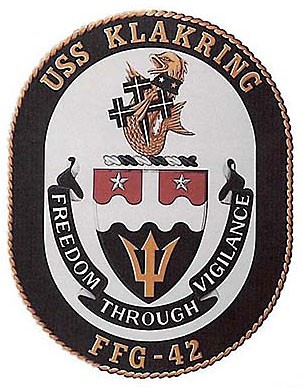 Caption: The shield is divided with a wavy band to suggest the ocean's surface. The blue base alludes to the undersea realm. The trident alludes to Rear Adm. Klakring’s long involvement with the submarine service. The trident and the colors blue and gold also allude to the Naval Academy, Klakring’s alma mater. Red symbolizes the enemy, and is split vertically to suggest a break in his defense as a result of Klakring’s successful submarine attacks during World War II. The two stars indicate Klakring’s rank as a Rear Adm., and superiority over enemy forces. Crest: The dolphin is the symbol of the submarine service. It is grasping a crosslet representing the three Navy Crosses that Klakring received for his heroism while commanding submarine Guardfish (SS-217). The two stars on the shield refer to the Silver and Bronze Stars awarded to Klakring for his command of Guardfish.

Following her CNO project and a visit to Dodge Island Terminal, Miami, Fla. (8–10 September) Klakring held a Tiger Cruise for her crew’s dependents, on 11 September 1986. While the ship sailed to the operating area, she received a distress call from King Fisher II, a small fishing boat from Charleston. Klakring proceeded at full speed to King Fisher II, and the ship transferred her emergency party via small boat to render assistance. The frigate returned to port on 12 September. On 29 September she off loaded her weapons at the Naval Weapons Station, Charleston, and completed her first Selective Restricted Availability (SRA-1) from 30 September to 5 December. On 12 December, Klakring on loaded her weapons from the Naval Weapons Station, and carried out her sea trials (15–18 December).

Klakring completed a number of training exercises during the New Year, including Fleet Exercise (FLEETEX) 1-87 and a War at Sea scenario (10–27 February 1987), and Solid Shield 87, FLEETEX 2-87, and another War at Sea scenario from 30 April to 10 May. Klakring deployed from Charleston for the Middle East on 6 June 1987. On 8 June she rendezvoused with the other ships of her transit group, and refueled at Rota on 15 June. The frigate visited Taormina, Sicily (19–21 June). She passed through the Suez Canal into the Red Sea on 24 June, and on 29 June refueled at Djibouti.

The ship supported Operation Earnest Will. The Iranians and Iraqis escalated their attacks against ships sailing in the Persian Gulf during the Persian Gulf War between those two countries, and the U.S. launched Earnest Will to maintain freedom of navigation in the area. The Americans initially renamed and reflagged eleven Kuwaiti tankers. Klakring patrolled the Persian Gulf between Radar Picket Stations North and South. The ship repeatedly passed outbound through the Strait of Hormuz to refuel from underway replenishment ships, and then returned to the Persian Gulf. On 10 August, Klakring embarked a detachment of Army helicopters and helped coordinate the efforts of British tugs converted for minesweeping. Klakring escorted Bridgeton, reflagged tanker Al Rekkah, outbound through the Strait of Hormuz on 30 August. The Iranians mined Bridgeton on 24 July, but the tanker survived.

The frigate rendezvoused with cargo ship Courier (T-AK-5019) and steamship President Pierce and escorted them to Fujairah (2 and 3 September 1987). On 3 September, she escorted tanker Sealift Mediterranean (T-AOT-173) to Bahrain. Klakring escorted tanker Sealift Pacific (T-AOT-168) through the Strait of Hormuz on 1 October. Klakring passed outbound through the Strait of Hormuz and anchored at Fujairah on 24 October. Guided missile frigate Carr (FFG-52) relieved Klakring on 26 October. Klakring refueled at Djibouti on 29 October, visited Jeddah, Saudi Arabia (1–4 November), passed northbound through the Suez Canal on 7 November, and (12–16 November) visited Saint Raphael, France. The ship put into Palma de Mallorca (17–21 November), on 22 November refueled at Rota, refueled again at Ponta Delgada on 26 November, and returned to Charleston on 4 December.

Comdr. Dennis J. Van Buskirk relieved Comdr. Coon as the commanding officer on 22 January 1988. Klakring completed repairs in drydock at Jacksonville Shipyards, Fla. (1–22 February). The ship accomplished Interim Readiness Training with Task Group (TG) 43.2 at Guantánamo Bay (21 March–13 April). A variety of training exercises followed, broken by a visit to Ft. Lauderdale, Fla. (8–13 May). She carried out further training, refueled at Roosevelt Roads on 18 May, visited St. Thomas (18–21 May), and on 27 May returned to Charleston. Klakring loaded a Coast Guard Rigid Inflatable Boat in preparation for her Caribbean Law Enforcement Operations (CDOPs) on 13 June 1988, setting sail the following day. The ship embarked a helicopter detachment at Mayport, Fla., on 18 June, and the following day the remaining Coast Guardsmen and their equipment boarded at Miami. Klakring participated in CDOPs (22 June–8 July), and returned to Charleston on 13 July.

While Klakring passed through the Strait of Gibraltar at 0400 on 11 June, she launched her helo in 44 knot winds. The ship relieved Charles F. Adams on 14 June. In company with San Jacinto she passed northbound through the Dardanelles and Bosporus on 18 June, and visited Constanta, Romania (19–22 June). Comdr. Van Buskirk and Capt. H. Ward Clark, the Commanding Office of San Jacinto, were flown to Bucharest to meet with Romanian defense leaders.

Klakring returned through the Bosporus and anchored at Istanbul, Turkey, on 23 June. On 27 June, she sailed southbound through the Dardanelles, and completed an intermediate maintenance availability with Haifa Shipyard, Ltd., Haifa, Israel, from 30 June to 10 July. Following her maintenance, she took part in Noble Dina 3, a joint US-Israeli naval exercise (10–13 July). She visited Alexandria, Egypt (19–24 July), and returned to Haifa (28–31 July). Rear Adm. Richard C. Macke, Commander Carrier Group 2, boarded the ship before her departure.

The frigate set a course for Palma, Spain, but on 1 August 1989, Arab terrorists in Beirut hung Lt. Col. William R. Higgins, USMC, a member of the UN peacekeeping forces in Lebanon, and threatened to murder additional hostages they held. Klakring steamed to Alexandria, where Admiral Macke boarded Coral Sea, and the carrier made for the Eastern Mediterranean as a show of force. Klakring spent August off the Lebanese coast on contingency operations.