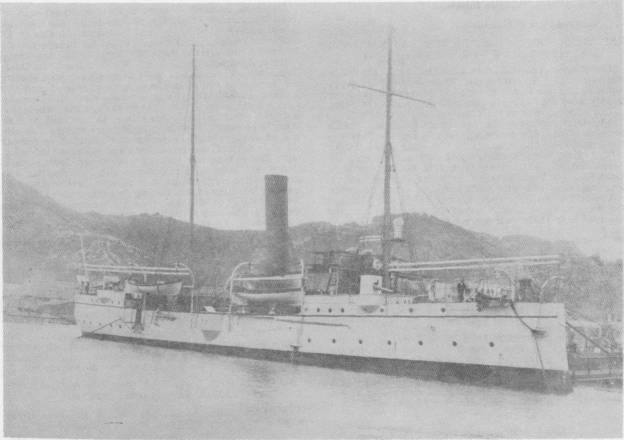 Isla de Cuba was built in 1886 for the Spanish Navy by Sir W. G. Armstrong, Newcastle upon Tyne, England; captured in the Philippines by the U.S. Navy in 1898 during the Spanish War; and commissioned 11 April 1900 at Hong Kong, China, Lt. J. N. Jordan in command.

Following extensive repairs and shakedown out of Hong Kong, Isla de Cuba was assigned to the Asiatic Station where she served in several capacities during the revolutionary unrest in the Philippines following the war. As a supply ship and patrol boat she cruised the Philippine Islands. At Ormoc, Leyte, 17 November to 8 December 1900, she sent a battalion ashore to hold the town while the army garrison leader was away on an expedition against the insurgents. In 1901 she made a survey of Ormoc anchorage and Parasan Harbor; and in March and April as a unit of the Southern Squadron, she rendered distinguished service in cutting off the enemy's supplies in Samar; in helping to capture Lukban, the insurgent leader in Samar; in contributing to the general defeat of the insurgents; and in maintaining the close blockade of the island, all of which contributed to the final declaration of an armistice.

Isla de Cuba ended her service with the Asiatic Station when she departed Cebu for the United States on 4 March 1904. Decommissioning 9 June at Portsmouth, N.H., she remained there undergoing repairs until 21 March 1907 when she was loaned to the Naval Militia of Maryland for use as a school ship. She was sold at Charleston, S.C., to the Republic of Venezuela 2 April 1912. Renamed Mariscal Sucre, she served Venezuela until she was scrapped in 1940.