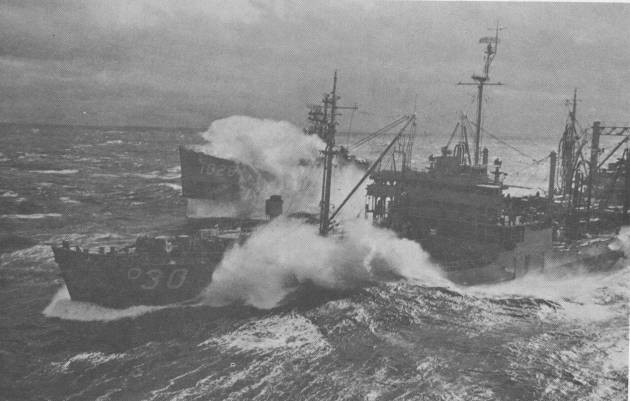 Stanford Caldwell Hooper was born in Colton, Calif., 16 August 1884, and graduated from the Naval Academy in 1905. Serving in various ships of the fleet, but always with an interest in the then new art of the "wireless", Hooper was appointed Fleet Radio Officer in 1912. A radio observer during the first part of World War I, he headed the Radio Division of the Bureau of Engineering until America's entry into the war. Hooper commanded destroyer Fairfax 1917-18 on convoy duty, and received the Navy Cross. Following the war he became the guiding force behind the development of radio communications and electronics in the Navy, serving in various technical posts until his retirement in 1943. Rear Admiral Hooper was retained on active duty until 1945, and held offices with civilian firms in the electronics field until his death 6 April 1955. He was the recipient of many awards for his work in radio, and is honored annually by the Navy through the Rear Admiral S. C. Hooper Trophy, given to the outstanding electronics division in the Naval Reserve.

One of a new class of fast escort vessels designed for convoy work, Hooper conducted shakedown training out of her home port, San Diego, before deploying with the 7th Fleet. The escort vessel took part in antisubmarine operations and joined the vital Formosa Patrol before returning to the United States 9 April 1959. Through 1961 she continued to operate with the 7th Fleet and in the San Diego area.

In January 1962, Hooper began a 2-month assignment as school ship at San Diego for antisubmarine training. Entering the yard at Hunter's Point in March, the ship had her after 3" mount replaced with a helicopter flight deck to increase her versatility, and also had the newest sonar equipment installed. Returning to her regular pattern of deployments to the Far East, Hooper continued to play an important role in keeping the peace in this vital area. In addition to her regular operations, she took part in SEATO maneuvers in the spring of 1963.

After serving in Hawaiian waters, Hooper returned to the Far East in July 1964. During November Hooper patrolled the Taiwan Strait. She returned to San Diego 16 December where she conducted coastal operations through 1965.

On 6 January 1966 Hooper, along with Bridget (DE-1024), Evans (DE-1023), and Bronstein (DE-1037), escorted Yorktown (CVS-10) to Hawaii. She then departed Pearl Harbor 7 February for Yokosuka, Japan, where she arrived 17 February. From 21 February to 18 March, she patrolled the Formosa Strait again. During the next 6 months Hooper operated off Vietnam, contributing to the safety of the legitimate government of South Vietnam. On 15 July Hooper departed Yokosuka for San Diego. En route the ship assisted in the search for a downed Royal Thailand Army DC-3 carrying Brigadier General Joseph Stillwell, Jr. The search was fruitless. Arriving at San Diego 22 July, Hooper operated off the West Coast for the remainder of the year and into 1967.