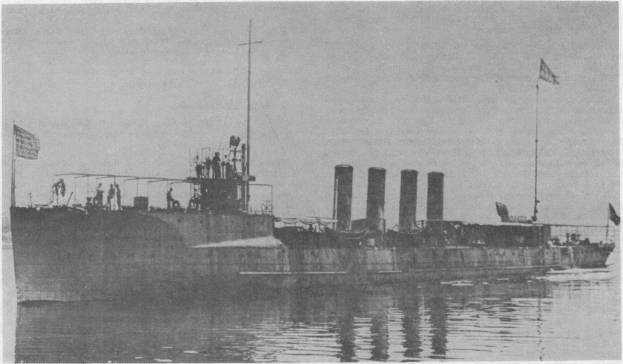 Caption: USS Henley (Destroyer No. 39) at the Fore River Shipyard in September 1912.

Robert Henley -- born on 5 January 1783 in Williamsburg, Va., son of Leonard and Elizabeth Dandridge Henley and nephew of Martha Dandridge Custis Washington -- received his education at the College of William and Mary. Appointed a midshipman on 8 April 1799, Henley participated in the engagement between frigate Constellation and La Vengeance during the Quasi-War with France on 2 February 1800. From 1801 to 1805, Henley served in the Mediterranean in schooner Enterprise and frigates Adams, Constitution, Congress, and John Adams. He then engaged in merchant service with a cruise to the East Indies (1806-1807). Henley returned to the U.S. and received his first command, Gunboat No. 60, at Norfolk, Va., from August to December 1807. Afterward, he transferred to command of Gunboat No. 5, at Baltimore, Md., on 9 April 1808.

Early in the War of 1812, Henley was in command of two divisions of fifteen gunboats that drove three British frigates from Hampton Roads on 20 June 1813. As commanding officer of the newly-launched brig Eagle, he received promotion to the rank of Master Commandant on 12 August 1814. He served under Master Commandant Thomas Macdonough at the U.S. victory at the Battle of Plattsburgh (N.Y.) (also known as Battle of Lake Champlain) on 11 September 1814. For his actions, he received the thanks of Congress and a gold medal for valiant conduct.

With the end of the War of 1812, Henley was noted as being on furlough in the 1816 Navy Register and “not on duty” in 1818. In 1819 and 1820, Henley was listed as being on duty at Gosport, Va. Later, as commander of the 18-gun brig-rigged sloop of war Hornet, he patrolled the West Indies with orders to suppress piracy. On 29 October 1821, he captured the pirate schooner Moscow off Santo Domingo and sent her to Norfolk with a prize crew. After serving as commandant of the Naval Rendezvous at Norfolk from 1822 to 1824, Henley reported for similar duty at Charleston, S.C. and was subsequently promoted to captain on 3 March 1825. Captain Henley died at Sullivan's Island, Charleston after a short illness on 7 October 1828. He was buried at Oak Hill Cemetery in Birmingham, Ala. 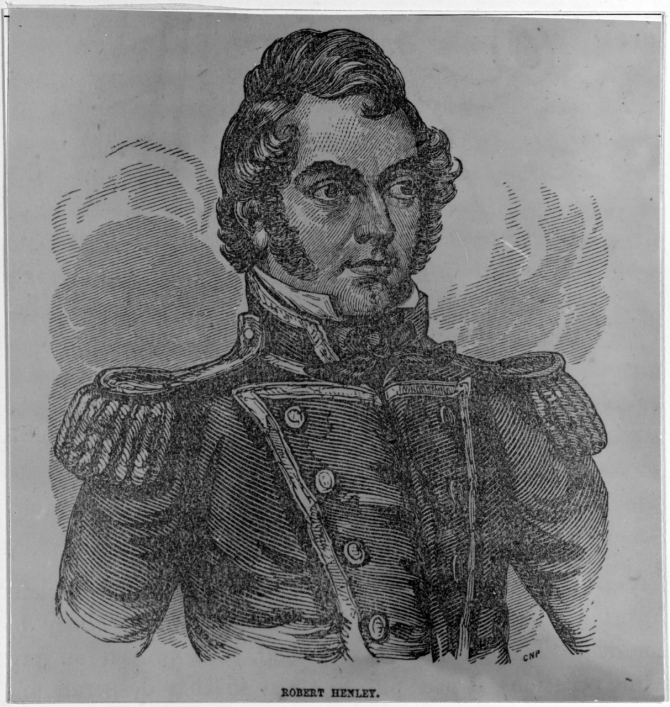 Lieutenant Robert Henley, USN from a photograph in "The American Navy" by Peterson, p. 476. Naval History and Heritage Command, NH 49113.

The first Henley (Destroyer No. 39) was laid down on 17 July 1911 at Quincy, Mass., by the Fore River Ship Building Co.; launched on 3 April 1912; sponsored by Miss Constance Henley Kane, great-grandniece of Robert Henley; and commissioned at Boston on 6 December 1912, Lt. Cmdr. William L. Littlefield in command. 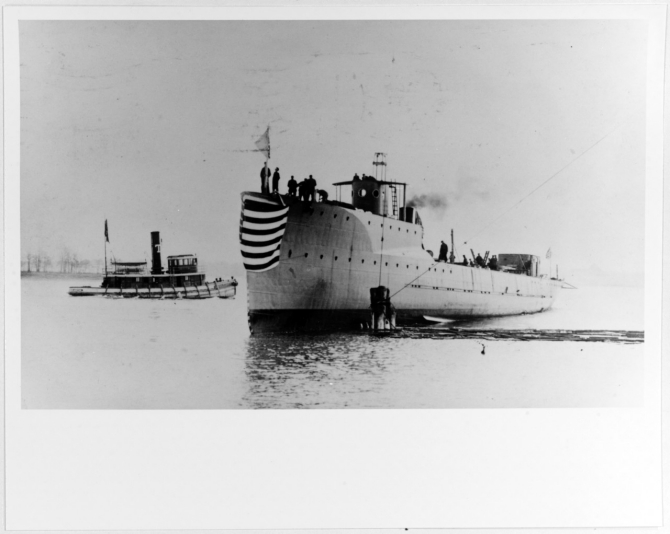 After training and shakedown, Henley joined the Torpedo Flotilla, U.S. Atlantic Fleet at Newport, R.I. During the course of that assignment, she routinely conducted tactical exercises and training maneuvers along the coast from the Caribbean to the North Atlantic. On 22 April 1914, she joined the fleet off Tampico, Mexico, to protect American citizens and property in the face of revolution in that country. During that period Henley also saw duty transporting refugees and supplies. With the beginning of World War I in Europe in August 1914, she began conducting a Neutrality Patrol along the coast and checked belligerent vessels in American ports.

When America entered the war on 6 April 1917, Henley, attached to the Patrol Force, Squadron Two, operated from Staten Island, N.Y. She then began to patrol and scout off New York and the New England coast hunting for German surface raiders and investigating various merchant ships. She also performed duty outside the submarine nets of New York harbor until 25 April, when she went into the New York Navy Yard for general overhaul until 25 May. She then moved to the Chesapeake Bay for gunnery exercises and also performed picket duty off the entrance to the York River (Va.). On 2 June, Henley escorted Seattle (Armored Cruiser No. 11) to New York, arriving on 3 June. Ten days later, on 13 June, the destroyer began escorting the oiler Maumee (Fuel Ship No. 14) to a high seas station about 37ºN and 37ºW with orders to fuel the escorting destroyers of the first troop convoy under the command of Rear Adm. Albert Gleaves, commander of the Cruiser and Transport Force. Henley then returned to the U.S. arriving at Newport on 30 June.

Henley departed Newport on 3 July 1917 and arrived at the York River the next day to perform picket duty in the Chesapeake Bay. Later that month, she escorted Delaware (Battleship No. 28), in company with Monaghan (Destroyer No. 32) en route to New York and Boston, Mass. She then returned to the York River escorting Maine (Battleship No. 10). In early August, Henley steamed with the U.S. Battleship Fleet in protection formation. On 20 August, she moved to Newport and performed various escort duties, after which time, on 27 August, she joined Delaware and proceeded to Port Jefferson, N.Y. as the battleship’s escort.

Secretary of the Navy Josephus Daniels, the Japanese ambassador, and the Japanese diplomatic mission came on board to take passage to the fleet anchored at Port Jefferson on 2 September 1917. At 1245, the group went on board Pennsylvania (Battleship No. 38) and at 1400, the party returned to Henley and got underway to inspect the fleet. Afterward, the destroyer returned to Hoboken, N.J. where Secretary Daniels and his party disembarked. The destroyer then returned to the fleet in Long Island Sound to resume patrol and escort work. On 15 September, Henley received orders to proceed to the Philadelphia Navy Yard for repairs, but returned to Port Jefferson on 21 September to resume escort duty. Later, on 1 October, she got underway and steamed in formation with the U.S. Atlantic Fleet until 7 October. Afterward, she returned to the Chesapeake Bay on 8 October and resumed patrol duty. The ship then shifted to Philadelphia on 2 November for the installation of new engines and for extensive repairs that were completed on 21 May 1918.

After repair trials and a short period of sea duty, she moved to the Navy Yard at Norfolk, Va. for temporary repairs to her stern that lasted until 13 July 1918. While underway the next day, 14 July, Henley damaged her bow when she collided with the steamship Edward L. Doheny, a mishap that required a return to Norfolk for repairs that lasted until September. Getting underway with Jouett (Destroyer No. 41), the destroyers escorted New Mexico (Battleship No. 40) to President Roads (Mass.). With that work completed, she performed anti-submarine patrols in conjunction with submarine chasers operating south of George’s Bank, Nova Scotia, and off Cape Cod, Mass., from 27 September to 12 October. The destroyer then shifted to Rockland, Me., to assist in screening Mississippi (Battleship No. 41), then undergoing her trials. On 24 October, she resumed her duties conducting anti-submarine patrols in conjunction with subchasers until the end of hostilities on 11 November. With the Armistice, Henley put in at the Philadelphia Navy Yard on 22 December 1918 and was decommissioned there on 12 December 1919. 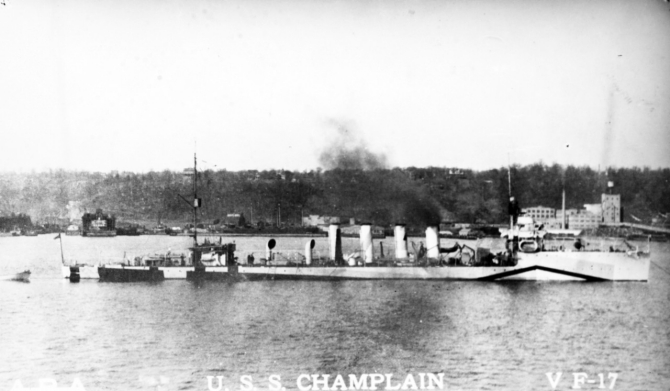 The Navy transferred Henley to the Treasury Department for service with the Coast Guard on 16 May 1924. The ship was placed into commission on 1 July 1924 “considerably in advance of completion in order that advantage might be taken of ‘assist ship’s force’,” job orders in the New York Navy Yard, to permit the starting of a general mess on board. That order, however, was rescinded on 3 July by Rear Adm. Frederick C. Billard, the Commandant of the Coast Guard. The ship underwent reconditioning that included rehabilitating the berthing spaces, installing new guns in the main battery, and removing her torpedo tubes and anti-submarine weapons, and the training of inexperienced crewmen on how to operate a destroyer. Henley left the New York Navy Yard for Philadelphia on 14 October.

Designated as CG-12, Henley was commissioned on 14 November 1924 at the Philadelphia Navy Yard, the first of the newly-acquired destroyers to be commissioned into the Coast Guard. She was assigned to Division 3 of the Coast Guard Destroyer Force, Capt. William H. Munter, commanding. After commissioning, the ship departed Philadelphia and reached Tompkinsville, Staten Island, N.Y. on 30 November. She then steamed to Cape May, N.J., where she arrived on 14 December. On 5 July 1925 she was at the New York Navy Yard and on 8 October she was at the Coast Guard Station at Stapleton, Staten Island, N.Y. On 22 May 1926, the destroyer was ordered to New London, Conn., where she arrived on 16 July. She left for Florida on 10 March 1928 and on 31 March was ordered back to New London. 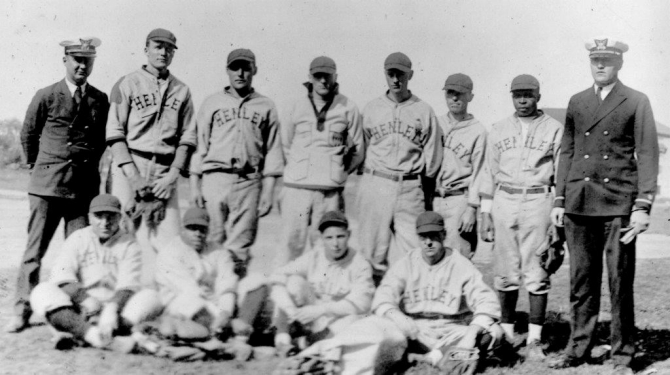 The intramural baseball team from Henley during the ship’s service with the Coast Guard. Note that two of the team members (front row, 2nd from left; back row, 2nd from right) are African-American. This photo precedes the integration of Major League baseball by Jackie Robinson and Branch Rickey in 1947. (USCG Historian’s Office, no date).

On 14 April 1929, Henley left New London for target practice at Charleston, S.C. and arrived three days later on 17 April. After completing target practice on 4 May, where she stood eighteenth out of a total of 24 Coast Guard destroyers, she returned to New London on 7 May. She later departed New York for the Philadelphia Navy Yard on 14 October 1930. Arriving two days later on 16 October, the ship was detached from the Destroyer Force and placed under Cmdr. Gordon T. Finlay, the Coast Guard representative at the Navy Yard. On 30 January 1931, the Coast Guard placed Henley out of commission at the Philadelphia Navy Yard and she returned to the Navy on 8 May 1931. The ship was stricken from the Navy List on 5 July 1934.

In accordance with the London Treaty for the reduction and limitation of naval armament, Henley was sold for scrap to Michael Flynn Inc. of Brooklyn, N.Y., on 22 August 1934.