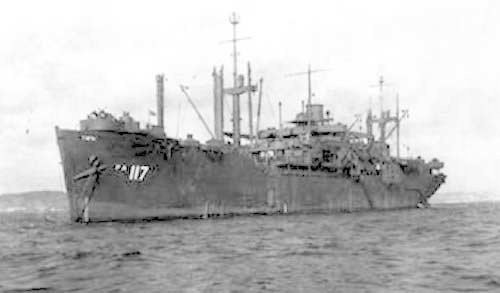 Counties located in the states of Kansas, Oklahoma, and Texas.

Haskell (APA-117) was laid down under a Maritime Commission contract (M.C.V. Hull 25) on 28 March 1944 at Wilmington, Calif., by the California Shipbuilding Corp.; launched on 13 June 1944; and sponsored by Mrs. Wilhelm L. Friedell, wife of the Commandant of the Eleventh Naval District. Sea trials on 27 August 1944 revealed that the ship lacked spare parts and uncompleted work on the gunnery installation. Ultimately, Haskell was accepted on 9 September 1944 and commissioned on 11 September 1944, Cmdr. Anton L. Mare in command.

Following her shakedown cruise, Haskell arrived at San Francisco, Calif., on 19 October 1944 and began embarking troops from the 427th and 429th Port Companies and the 1315th Engineering Construction Battalion, destined for the South Pacific. Underway on 28 October, she set course for Finschhafen, New Guinea, and arrived on 15 November. Four days later, the transport anchored at Biak Island and unloaded her troops, who were to take part in the ongoing New Guinea offensive.

Haskell sailed via Mios Woendi to Noemfoor Island, Netherlands New Guinea (23 November—2 December 1944), where preparations were underway for the important landings at Lingayen Gulf, Philippines. Veterans of the U.S. Army’s 158th Regimental Combat Team (RCT) embarked on board the transport and conducted practice landings at Japen Island on 2 January 1945. Haskell departed Noemfoor Island in convoy for the Philippines on 4 January, undergoing two submarine attacks in route. As part of Rear Adm. Richard L. Conolly’s reinforcement echelon, Haskell and the other transports arrived off Lingayen Gulf on 11 January, two days after the initial landings. She disembarked troops and unloaded cargo throughout the day, even as the Japanese struck the American fleet from the air. Haskell’s gunners shot down their first enemy aircraft during an air raid at dusk. After unloading the final artillery piece before noon the next day, the transport made ready and departed that evening for Leyte Gulf.

Sailing along the route she had taken to Lingayen Gulf, Haskell arrived at San Pedro Bay, Leyte on 15 January 1945, embarked troops from the 34th RCT, and took part in practice landing exercises at Tacloban, Leyte. On 26 January the ship departed San Pedro Bay for the Zambales coast, twenty-five miles northwest of Bataan, as part of Rear Adm. Arthur D. Struble’s amphibious group. The landing, carried out three days later, led to the capture of the Bataan peninsula and the opening of vital supply lines to American forces advancing on Manila. Haskell returned to Leyte Gulf on 1 February 1945 for a much needed period of rest and repairs.

Haskell was next assigned to what would be the largest amphibious operation of the war in the Pacific. She completed embarking troops and loading equipment of the 381st RCT of the 96th Division at Leyte on 13 March 1945, and after amphibious exercises sailed two weeks later for Okinawa. This massive invasion, climax of the Pacific island-hopping campaign, began on 1 April. A member of Rear Adm. John L. Hall’s Southern Attack Force, Haskell landed troops of the 381st RCT with their equipment during the first waves of the assault, and subsequently served as an emergency hospital ship at her offshore anchorage. The transport sailed for Saipan on 6 April, thus escaping the heavy Japanese air counterattacks so valiantly endured by the ships remaining at Okinawa. Making only brief stops (primarily to refuel), Haskell steamed independently from Saipan via Eniwetok and Pearl Harbor to San Francisco, where she arrived on 1 May.

The ship underwent needed repairs and embarked 1,540 Navy and Coast Guard sailors for the Pacific and sailed on 23 May 1945 for Noumèa, New Caledonia. Arriving on 9 June, she debarked part of her passengers and unloaded a portion of her cargo before continuing on to Espíritu Santo, New Hebrides, where she arrived on 11 June. After landing more passengers, loading new cargo, and embarking 1,125 new passengers, Haskell departed Espíritu Santo on 19 June for Guadalcanal. The transport arrived off Lunga Point on 21 June, and following a small exchange of passengers the ship sailed the next day for Guam via Eniwetok.

She arrived at Apra Harbor, Guam, on 1 July 1945, unloaded all cargo and passengers, and embarked 83 Japanese prisoners of war with a USMC guard for transfer to Pearl Harbor. Sailing from Guam on 5 July, Haskell responded to an emergency radio dispatch on 11 July telling her to receive an ailing sailor, from the rescue tug ATR-78, on board for medical treatment. Increasing speed, the transport made rendezvous with the big harbor tug Topawa (YTB-419) at 1755, which discharged MM1c Lee Stanfield to Haskell at 1802, where Cmdr. Donal W. Morgan, MC, USNR, the transport’s senior medical officer, immediately diagnosed the new patient as suffering from appendicitis. The transfer from the tug having been accomplished uneventfully, Dr. Morgan performed the appendectomy forthwith. Arriving at Pearl Harbor on 15 July, Haskell sailed the next day carrying 561 U.S. Army soldiers for San Francisco, where she arrived six days later; MM1c Stanfield made the voyage back to the west coast, too, being transferred on the 22nd to the Receiving Hospital, San Francisco, for further disposition and treatment. After undergoing post voyage repairs, Haskell sailed from San Francisco on 10 August arriving at Seattle, Wash., two days later.

While Haskell loaded at Seattle, the war in the Pacific ended, the ship received a new commanding officer: Cmdr. Alexander Kusebauch, (DM), USNR, and assumed a new role: that of transporting occupation troops to the Pacific and bringing returnees back to the United States. She sailed on 20 August 1945 for Okinawa with 1,722 army passengers and after stops at Eniwetok on 2 September and Ulithi, Caroline Islands, four days later, the ship arrived at Hagushi Bay on 11 September. On 16 September, the ship was forced to put to sea to ride out the giant typhoon which swept the area, returning to Okinawa after enduring two days of heavy weather.

On 21 September 1945, Haskell received 1,405 American, Australian, British, and Dutch former prisoners of war held by the Japanese, for transportation to Manila, Philippines, in one leg of their journey home. The ship sailed from Okinawa the next day and arrived at Manila on 25 September where the Allied former POWs disembarked and 1,790 new passengers, mostly members of the Far Eastern Air Forces, came on board. Following the usual refueling stop at Eniwetok, Haskell arrived at San Francisco on 19 October.

As part of the Magic Carpet fleet Haskell made two more voyages to the Far East during the gigantic task of returning U.S. servicemen to their homes. Departing San Francisco on 4 November 1945 with 669 naval replacements embarked, the ship reached Buckner Bay, Okinawa, on 20 November, exchanging her passengers for 2,014 U.S. Navy veterans, many from Construction Battalion (CB, or “Seabee”) detachments. Sailing the next day, the transport put into Portland, Oregon, on 4 December. Following a three week stay over the holidays, Haskell sailed on her final trans-Pacific voyage on 30 December. Japanese tugs greeted the transport as she arrived in Yokosuka Bay on 15 January 1946. After embarking 1,750 passengers, the ship sailed for Seattle, Wash., on 19 January. Haskell's lookouts spotted a floating mine 115 miles off the American coast, thus enlivened the routine return passage, and the ship destroyed the hazard with 20-millimeter fire prior to entering port on 2 February.

Designated for return to the U.S. Maritime Commission, Haskell sailed on 25 February 1946 for Norfolk, Virginia, and proceeded via the Panama Canal, arriving at her destination on 18 March 1946. Decommissioned on 22 May 1946, Haskell was returned two days later [24 May 1946] and was placed in the Reserve Fleet, James River berthing area, that day. She was stricken from the Navy Register on 19 June 1946.

Haskell received three battle stars for her World War II service, recognizing her participation in the landings at Lingayen Gulf (11—12 January 1945), Zambales—Subic Bay (29—31 January 1945), and the assault and occupation of Okinawa Gunto (1—6 April 1945).