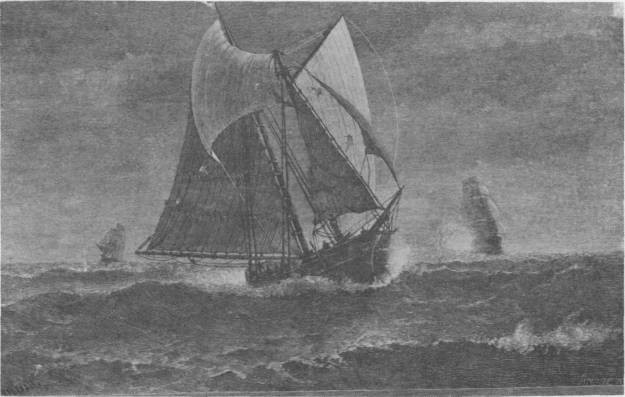 Caption: Embryo of the American Navy. The Schooner "Hannah" running the guantlet of two British ships-of-war, off Cape Ann, September 5, 1775.

Hannah, originally owned by John Glover of Marblehead, Mass., was the first armed vessel to sail under Continental pay and control, and was taken over 24 August 1775. She was the beginning of the small fleet fitted out by George Washington in the fall of 1775 to aid him in the siege of Boston by capturing provisions ships making for the harbor from British ports. Her first Captain was Nicholson Broughton, a captain in the Army, and her crew was recruited from John Glover's regiment.

After outfitting, Hannah sailed 5 September, and two days later captured the sloop Unity with naval stores and provisions. The ship returned to Beverly, Mass., and after much trouble maintaining an adequate crew, sailed again near the end of September 1775. She cruised off Boston, and was run ashore by British sloop Nautilus near Beverly 10 October. After a spirited engagment between the British ship and townspeople on the shore, Hannah was saved from destruction and capture, but was soon decommissioned as General Washington found more suitable ships for his cruisers.