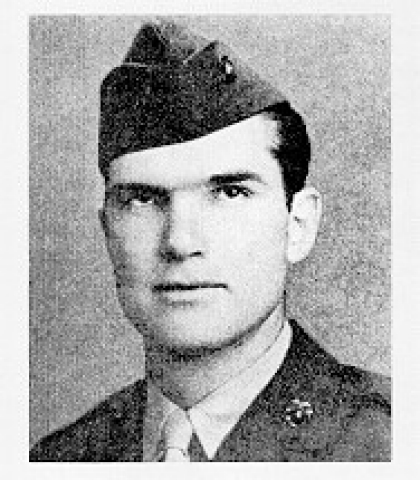 Pharmacist’s Mate 2nd Class William D. Halyburton, Jr., who received the Medal of Honor posthumously for heroically sacrificing himself while serving with the 2nd Battalion, 5th Marines, 1st Marine Division, on Okinawa in the Ryūkyūs, on 10 May 1945. Heavy Japanese mortar, machine gun, and sniper fire swept the Marines as they advanced through a strategically important draw and up a hill, pinning down the leading squad. Halyburton moved through the enemy’s fire and reached a wounded Marine who lay farthest away, and administered first aid when a second Japanese bullet struck the patient. Halyburton shielded the man with his own body and continued to treat him until hit by Japanese fire and succumbing from his wounds. 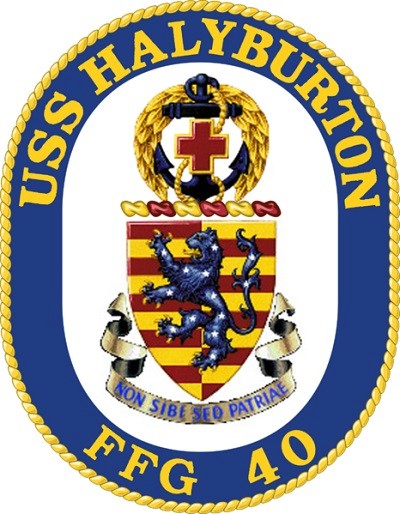 The ship’s crest is designed to represent the heroic action of Pharmacist’s Mate 2d Class William D. Halyburton, Jr. The scarlet and gold bars in the shield denote service in a land action with the U.S. Marines; the alternating colors of the bars symbolize the exchange of fire with an opposing force. The heraldic lion rampart in the midst of the field denotes a single of great courage, i.e., Halyburton placing himself in the line of fire, in complete disregard of his own safety, in order to shield from further harm, and render medical aid to, a fallen Marine, thereby giving his own life in exchange. The lion is blue, the color of the Medal of Honor ribbon, and is strewn with thirteen stars, as is that decoration, the nation’s highest. The gold laurel wreath, inverted, is symbolic of the posthumous awards to Halyburton in addition to the Medal of Honor: the Purple Heart, Asiatic Pacific Campaign Medal, and World War II Victory Medal. The anchor and cross denote naval service and provision of medical care on the battlefield. 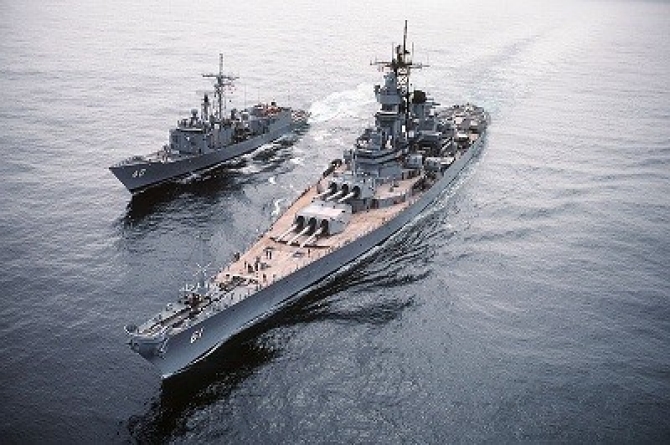 Pirates captured U.S.-flagged motor vessel Maersk Alabama and her 22 crewmembers, 300 miles from the Somali coast, on 8 April 2009. The crew recaptured their ship along with one of the pirates, but the three surviving pirates held the vessel’s master, Capt. Richard Phillips, hostage on a lifeboat. Amphibious assault ship Boxer (LHD-4), guided missile destroyer Bainbridge (DDG-96), and Halyburton responded, and a ScanEagle unmanned aircraft system provided timely intelligence during the confrontation. SEAL snipers on board Bainbridge killed the pirates and rescued Phillips on 12 April.

Halyburton served with Destroyer Squadron 14 when she was decommissioned on 8 September 2014 at at Mayport, Fla.