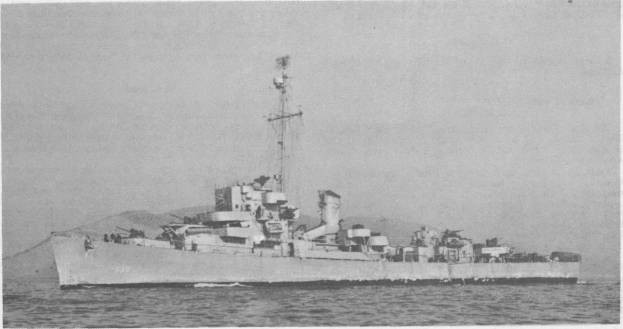 Elphege Alfred M. Gendreau, born in Canada 29 June 1888, was commissioned Assistant Surgeon, Medical Reserve Corps, with the rank of Lt. (j.g.) 20 August 1915. He served in Glacier in Mexican waters during political unrest in that neighboring country and in Charleston during World War I.

After distinguished service in a number of assignments afloat and ashore, Gendreau was commissioned Captain 20 September 1939. During the years 1940 and 1941, he served as Force Surgeon of Battle Force and subsequently on the staff of Admiral Nimitz, Commander in Chief, Pacific Fleet. In the summer of 1943, he was on temporary duty in the South Pacific inspecting medical facilities to improve treatment and care of battle casualties. He voluntarily embarked in LST-343 to assist in the evacuation of the sick and wounded in Rendova. He was killed in a dive-bombing attack on LST-343 on 21 July 1943. His unspectacular but dedicated service prompted Admiral Nimitz to recommend that a destroyer be named for Captain Gendreau.

After shakedown off the California coast, Gendreau departed San Francisco 23 May escorting a convoy to Pearl Harbor, arriving 6 days later. She trained in Hawaiian waters and got underway 18 June 1944 on the first of two voyages, escorting convoys between Hawaii and the Marshalls. Convoy duty brought her to Eniwetok again and on 26 July Gendreau returned to Oahu from the second voyage in time to help welcome President Roosevelt to Hawaii. During ensuing ASW patrol out of Pearl Harbor, the destroyer escort rescued the pilot and crew of an aircraft which had ditched at sea 31 July; and 9 days later in heavy seas saved a downed fighter pilot.

Gendreau departed Pearl Harbor 8 September with a convoy for Emirau. On 13 September she collided with escort carrier Breton (CV-23) while fueling from her in heavy seas; but efficient emergency repairs allowed Gendreau to proceed with the convoy to Emirau before steaming into Manus 19 September for repairs. She sailed from the Admiralties 1 October and arrived Port Purvis, Solomon Islands, 4 October. Following intensive training with PT boats at Tulagi, she sailed 27 October for the Russell Islands and rendezvoused with a convoy of landing craft bound for New Georgia Island. Departing there 29 October, the group proceeded to Cape Torkina, Bougainville, where the landing craft debarked troops. Gendreau escorted the landing craft back to the Russells 1 November and returned to Port Purvis the next day.

Then in March 1945, following 3 months of escort and ASW duty shuttling between islands of the South Pacific, Gendreau rehearsed for the coming Okinawa invasion after which she escorted landing craft to the Russell Islands and Port Purvis, arriving Port Purvis 7 March and returning to the Russells 4 days later. Underway from the Russells 12 March, she called at Ulithi 21 March for final staging and sortied 4 days later with a task force for the Ryukyus.

On D-day, 1 April, Gendreau was off the southeast coast of Okinawa protecting amphibious ships. Before dawn a Japanese plane attacked the DE but was shot down and splashed a few yards to starboard. A few hours later she closed the invasion beaches and delivered the landing craft to their assigned positions well in advance of the final bombardment and initial landings. The next day she was in the destroyer screen when another enemy plane attacked her at dawn, but with the aid of other ships she managed to splash it. On the 3d, a plane strafed her and then, on its second pass, tried to crash her, but Gendreau's gunfire blew him out of the air and splashed him 25 yards away. On 5 April she joined a hunter-killer group.

On 6 April a torpedo bomber aimed a torpedo at the DE, but it exploded upon hitting the water. Gendreau splashed the bomber 500 yards astern. The following day she destroyed another attacking plane. On the 12th, without warning a torpedo bomber roared in and released a torpedo which passed just under the bow and exploded some distance beyond. On 16 April two enemy planes homed in on her, but two American fighters swooped in from behind and shot down the attackers.

Gendreau departed Okinawa 22 April with a convoy, touching at Saipan 5 days later and returning to Okinawa 2 May. She departed the next day for Ulithi, arriving 7 May. Underway again 23 May with a mixed convoy, she called at Okinawa the 29th and escorted convoys in these waters. On 10 June 1945, while supporting the American troops who were wresting the island from Japan, Gendreau was hit by shellfire from a hidden 150mm. gun. She lost power and began taking water, but outstanding damage control had her under control in 15 minutes and nearly restored her to normal within 2 hours. Two men were killed and two others wounded.

After repairs at Kerama Retto and later at Buckner Bay, Okinawa, she joined Vice Admiral Oldendorf's Task Force 13 July for training and minesweeping in the East China Sea. On 26 July she rescued a friendly fighter pilot who had ditched at sea, picking him up only 32 minutes after the crash. At the end of the month a bad typhoon caused her to roll nearly 60° and buckled steel plating. On 31 July 1945 she escorted damaged Pennsylvania (BB-38) to Guam and returned to Okinawa 12 September where 4 days later another typhoon parted her port anchor chain. She departed 22 September to act as courier ship during the Allied occupation of the Japanese homeland.

Thus, after a short but distinguished war career, Gendreau stood out of Tokyo Bay 4 November 1945 bound home via Pearl Harbor, arriving Portland, Oreg., 22 November. In February 1946 she proceeded to San Diego for training exercises and then departed the following month on a Far Eastern cruise.

Gendreau arrived Shanghai, China, 14 April and sailed to Hulutato, Manchuria, and to Tsingtao and Chinwangtao, China. Further patrols brought her to Okinawa and Shanghai again May to June, and on 1 July she headed for California, arriving San Diego the 19th. After training and repairs she cast off on her last Far Eastern cruise, calling at Pearl Harbor and Guam en route to Japan, where she arrived 19 March 1947. In the spring and summer of 1947, Gendreau stood patrol duty off the Korean coast, calling at Yokosuka, Japan, 21 May, and thence returning to station. On 1 September she sailed from Japan for Pearl Harbor and San Diego, putting in at the latter port 19 September.

Gendreau decommissioned 13 March 1948 and entered the Pacific Reserve Fleet at San Diego, where she remains.