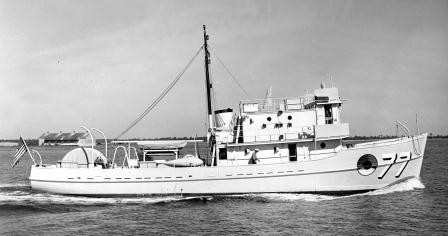 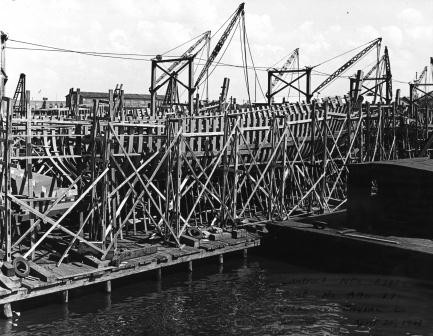 The unnamed wooden-hulled coastal minesweeper AMc 77 was laid down on 14 April 1941 at Jacksonville, Fla., by the Gibbs Gas Engine Co.

Named Endurance (AMc-77) on 17 May 1941, the ship was launched on 19 June 1941, andunderwent her builders’ trials on 7 October. The new coastal minesweeper sailed on 8 October for Charleston, S.C., where she was accepted by the Navy the following day. Endurance was placed in service on 11 October 1941, Lt. (j.g.) Horace G. Stevens, D-V(S), USNR, officer in charge. 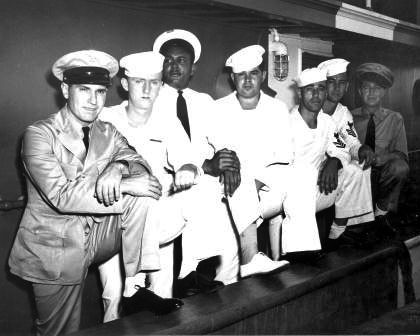 Four days later [15 October 1941] Commandant, Sixth Naval District (ComSix), received a request from the office of the Chief of Naval Operations (CNO) that upon completion of Endurance’s fitting out, she was to report to the Commandant, Fifth Naval District (ComFive), for temporary duty that would include two weeks of training at the Mine Warfare School, Yorktown, Va., with ComFive to inform the CNO when she was ready to proceed to a permanent station. An operation order (34-41) of 24 October accordingly directed Endurance to proceed to Norfolk on 29 October. She did so on schedule, having completed the fitting-out process.

Following an emergency availability at the Norfolk (Va.) Navy Yard (10-17 November 1941) for repairs to her main engine reversing gear and damaged hull planking, Endurance carried out her training, completing it on 5 December. Departing Norfolk the following day, she proceeded to Naval Operating Base (NOB) Norfolk for further orders. The American entry into World War II, in the wake of the Japanese attacks on Oahu and elsewhere in the Pacific and Far East, however, resulted in ComFive directing the minesweeper to report to Commander, Inshore Patrol, Fifth Naval District.

A CNO dispatch of 9 December 1941, however, directed Endurance to report to ComSix and join sister ships Courier (AMc 72) and Defiance (AMc 73), and Caracara (AMc 40), and Chachalaca (AMc 41), assembled to proceed thence to a permanent station. Endurance, having received acoustic minesweeping gear and two .50 caliber machine guns that replaced the interim .30 caliber weapons, departed Charleston on 24 January 1942, escorted by the ocean-going tug Montcalm (AT 39). She arrived at San Juan, Puerto Rico, on the 28th to take up her duties in the Tenth Naval District. Endurance, equipped with acoustic, magnetic, and Oropesa-type minesweeping gear, however, soon distinguished herself in another role.

Less than a half hour after the mid-point of the mid watch on 8 March 1942, the German submarine U 126 (Kapitänleutnant Ernst Bauer, commanding) attacked the Panamanian-flag registry motor tanker Esso Bolivar (James M. Stewart, Master) as she steamed unescorted (and, providentially, empty) some 30 miles southeast of Guantanamo Bay, first with gunfire, setting the ship ablaze, then with a torpedo that blew a 50-by-35 foot hole next to the tanker’s pumproom, blowing her deck cargo of acetylene cylinders sky-high. The onslaught killed the ship’s master, and mortally wounded the first mate and five crewmen, as well as one of the Navy Armed Guard complement. The survivors, that included fourteen wounded (ten merchant sailors and four of the Armed Guard), abandoned the holed Esso Bolivar as she assumed a heavy port list. Daybreak found the four rafts and one lifeboat scattered in the swells. 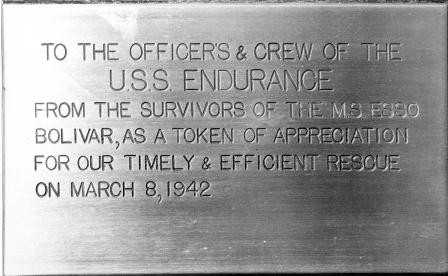 Caption: The second plaque (the first having been lost in transit) sent by the surviving crewmen of the tanker Esso Bolivar to the men of Endurance in appreciation for their rescue on 8 March 1942. (U.S. Navy Photograph 80-G-68666, Still Pictures Branch, National Archives and Records Administration, College Park, Md.)

“Finally,” wrote Chief Engineer Thomas J. McTaggert, the senior surviving officer and Esso Bolivar’s chief engineer, “someone sighted a small vessel headed our way…she proved to be the [coastal] minesweeper…Endurance.” Before mid-day, the little minecraft picked up the men from two rafts she had spotted first, then rescued McTaggart and his party of survivors. “When the Endurance arrived,” McTaggart continued, “some of us were anxious to go back aboard the ship. But the [officer-in-charge] …would not agree to this; the wounded men needed attention and the sooner they could be hospitalized the better.”

As Endurance steamed toward Guantanamo, the high-speed (destroyer) transport Stringham (APD-6), ordered to suspend fueling at the NOB there in order to proceed to the scene with all dispatch, met them and sent over a boat at 1346 with Lt. (j.g.) Ernest N. Serramo, MC-V(G), USNR, the medical officer for Transport Division Eleven, to treat the wounded. The boat then took on board Third Mate Oscar Owen, the only unwounded deck officer, and Able-Bodied Seaman Bjarne Johnsen, and returned to the ship. Stringham then hastened on to Guantanamo to disembark her passengers, Owen to report what had befallen Esso Bolivar, then complete fueling before she returned to the waters in the vicinity of the tanker to aid in salvage work. In the end, a tribute to the perseverance of her crew, Esso Bolivar returned to service that summer.

Endurance’s CMoMM J. H. Copeland, EM3c E.T. Kilheeny, OC2c G. A. Kinion, BM1c F. L. Kasper, EM1c R. M. La Gory, CMoMM J. E. Clabo, and CMoMM J. W. Drain received special thanks from Esso Bolivar’s survivors. The grateful tanker sailors later sent a silver plaque inscribed to the minesweeper as a token of their appreciation, but when it was reported to have disappeared during shipping, McTaggart, who had been awarded the Merchant Marine Distinguished Service Medal for his role in rallying the survivors as well as for his work in the salvage of the ship, sent an identical copy that eventually arrived at its intended destination. 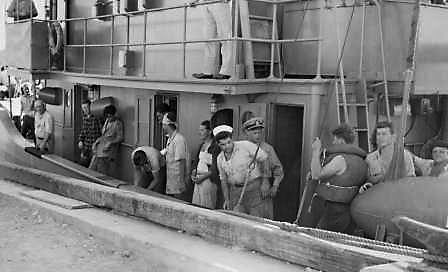 Assigned to the Caribbean Sea Frontier on 1 July 1942, Endurance served in those waters until reassigned to the Tenth Naval District on 21 April 1944. After the end of the war in Europe, the ship was reassigned to ComSix for disposal on 27 June 1945.

Arriving at the Sea Frontier Base, Charleston, S.C., on 7 September 1945, Endurance was placed out of service on 6 December 1945. Assessed as “surplus to naval needs,” she was made available for disposal, with the Office of the Chief of Naval Operations authorizing ComSix to deliver the ship to the Maritime Commission’s War Shipping Administration.

Stricken from the Navy Register on 3 January 1946, the ship was accepted by the Maritime Commission on 7 July 1947 and “physically delivered” to Helen Leona Johnson of Dallas, Texas, the purchaser, at Charleston the same day.

Renamed, first to Carmelita (1947), then to Capitan (1951), the former coastal minesweeper served in the fishing trade, out of Houston, Port Isabel, and Brownsville, Texas, ultimately with Hunter Flores. The vessel fondly remembered by the men of Esso Bolivar was, in the end, dismantled in 1969. 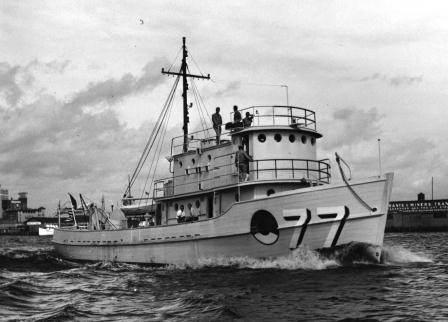 Caption: Running builders’ trials, 7 October 1941, painted in No.5 Navy Gray with black-shadowed white identification numbers, and displaying the Mine Force insignia (clockwise: blue, red, and white, with a black center and surrounding ring). At that point, she did not carry any armament (U.S. Navy Bureau of Ships Photograph 19-LCM-25829, Still Pictures Branch, National Archives and Records Administration, College Park, Md.)