A city in Iowa.

Dubuque (LPD-8) was laid down on 25 January 1965 at Pascagoula, Miss., by Ingalls Shipbuilding Corp.; launched on 6 August 1966; sponsored by Mrs. Julianne Hughes, wife of Governor Harold E. Hughes of Iowa; and commissioned at Norfolk, Va., on 1 September 1967, Capt. Howard J. Ursettie in command. 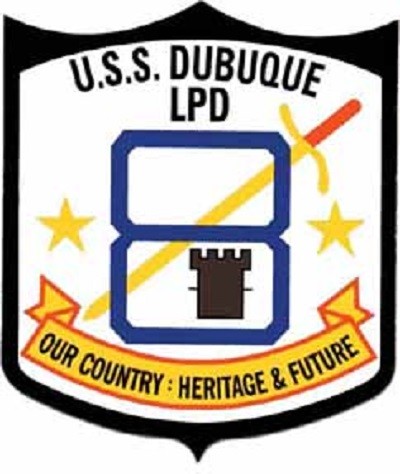 The raised tower located in the lower portion of the eight is a reproduction of the stone tower which marks the gravesite of Julie Dubuque, the founder of the city of Dubuque. The two raised stars centered on either side of the eight symbolize PG-17 and LPD-8, the two Navy ships to bear the name of Dubuque.

The ship’s motto, Our Country: Heritage and Future, is a creation of a member of the commissioning crew. It expresses the deep feelings of pride and respect that Dubuque crewmembers have for their country.

The dominant figure eight backed by the drawn sword represents the ship’s ever present capability to stand steadfast in defense of the United States.

On 27 January 1973, Task Force (TF) 78 stood up to conduct Operation End­sweep, mine­sweeping operations in North Vietnamese waters stipulated by the Paris Peace Accords. The Navy cancelled Dubuque’s scheduled visit to Hong Kong, and she came about from the Western Pacific and sailed to Buckner Bay (Nakagusuku Bay), Okinawa, where she off-loaded Marine Helicopter Attack Squadron (HMA) 369 and Tactical Air Control Squadron (TACRON) 13 (26–28 January). She then prepared for Endsweep while she visited Subic Bay, Philippines (31 January–23 February).

Dubuque took part in Endsweep at times into the summer. She initially embarked Mobile Mine Countermeasures Detachment A and the Sikorsky CH-53A Sea Stallions of Helicopter Mine Countermeasures Squadron (HM) 12 Detachment A, and sailed from Subic Bay (21 February) in company with amphibious assault ships Inchon (LPH-12) and New Orleans (LPH-11), and amphibious transport docks Cleveland (LPD-7) and Ogden (LPD-5). The ship anchored in anchored in anchorage 1-C-1A in Haiphong Roadstead (at 1257 on 23 February), and began almost two months of minesweeping operations.

A fire erupted in the forward engine room of ocean minesweeper Enhance (MSO-437), while she operated in North Vietnamese waters near Hon Gai (17 March). Dubuque made for the area and together with Inchon, Pluck (MSO-464), and salvage ship Safeguard (ARS-25), rescued most of the crewmen. She anchored overnight in anchorage 2-C-1 in in Haiphong Roadstead, and the following day delivered the survivors to combat store ship Niagara Falls (AFS-3).

Dubuque returned more than once to her minesweeping tasks, and anchored at times at Hon La and Hon Matt anchorages. She emergency sortied from Hon Matt on the morning of 7 July to evade Typhoon Anita. The eye of the tempest passed within 20 miles of the ship, but she steamed to an area off DaNang, South Vietnam, and then returned to Hon Matt, and thus escaped significant damage (8–9 July).

President Richard M. Nixon abruptly halted the operations and the minesweeping task force moved to sea, while the chief executive called for “clarification…on a most urgent basis” of North Vietnamese delays in releasing American prisoners of war (POWs). Following North Vietnamese overtures to release the prisoners, the withdrawal of U.S. troops from Vietnam and TF 78 resumed minesweeping (28 February–4 March 1973). Dubuque came about from Endsweep with most of the ships of TF 78 and made for Subic Bay (18 July). On 27 July, Operation Endsweep concluded and TF 78 was disbanded. Helicopters made 3,554 sweeping runs totaling 1,134.7 sweeping hours in 623 sorties. Three helos were lost in ac­cidents. Minesweeping ships completed 208 sweeping runs of 308.8 hours. 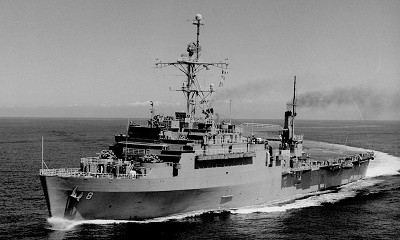 Dubuque participated in Frequent Wind. She sailed from Subic Bay (2143 on 18 April), anchored off South Vietnam (1643 on 27 April), shifted anchorages the following day, sailed again (at 1931 on 28 April) for Dao Phu Quoc, an island in the Gulf of Siam (Thailand), for a special mission to refuel helicopters flying evacuees. The ship then came about (1 May) and returned to Subic Bay (1309 on 4 May).

Aircraft from Coral Sea (CVA-43) and Enterprise (CVAN-65) flew 173 sorties that covered 638 USAF and USMC and about 250 CIA helo missions. Frequent Wind evacuated 395 Americans and 4,475 South Vietnamese and other people from Tan Son Nhut, and 978 Americans including Ambassador Graham A. Martin and his family, and 1,120 South Vietnamese and allied nationals, from the embassy. Helicopters recovered on board vessels including Midway (CVA-41) and command ship Blue Ridge (LCC-19), but to reduce top hamper and to make room for more aircraft, sailors heaved helos overboard. Aircraft from Coral Sea, Enterprise, and Hancock covered the exodus of a floating city totaling almost 80,000 people, including those who had already reached the ships, en route to the Philippines and Guam.

The amphibious transport dock shifted her home port from San Diego, Calif., to Sasebo, Japan (15 August–4 September 1985). Dubuque deployed (1 June–November 1988) as a control ship for minesweeping operations in the Persian Gulf during the Tanker War between the Iraqis and Iranians. She rendezvoused with Military Sealift Command (MSC) manned ammunition ship Kilauea (T-AE-26) (9 June), and they continued southward to cross the equator.

The following day (10 June 1988), they sighted a 35-foot wooden boat packed with Vietnamese refugees fleeing communist rule in their homeland. The boat sailed from Ben Tre, Vietnam (22 May), but the engine failed two days later and she drifted. Dubuque’s sailors fatally underestimated the numbers of people on board who struggled for survival against starvation and exposure on board their flimsy craft (they estimated 50–70 refugees but 110 people had purportedly put to sea). Capt. Alexander G. Balian, Dubuque’s commanding officer, accessed the situation and decided to distribute food and water to the castaways, as well as charts providing limited navigational information. The Navy later released a statement that “the craft was judged to be in seaworthy condition and was under sail.” Dubuque continued on her original voyage.

The food and water proved inadequate for the actual number of people on board the boat, however; and as many as 58 died, an estimated 20 succumbed before they sighted Dubuque, and the remaining victims following the U.S. ship’s departure from the area. Grim tales afterward emerged of desperate people who resorted to cannibalism to survive. Filipino fishermen eventually rescued the 52 survivors. The Navy relieved Balian of his command (11 August), and subsequently court martialed him (at his request). The court found him guilty of violating standing orders to render assistance to those in peril of the sea, and he received a letter of reprimand.

The ship offloaded her Marines at Kuwait Naval Base (24 February–3 March). A Sikorsky SH-60B Seahawk of Helicopter Antisubmarine Squadron (Light) (HSL) 51, deployed with guided missile frigate Gary (FFG-51), assisted in the rescue of all eight Iraqi fishermen from dhow Kaptain Muhamadat, when she lost steerage and propulsion in heavy seas and capsized 20 miles south of the Iranian coast (13 March). Gary transferred the Iraqis to Dubuque (18 March), and she subsequently returned them to Iraq.

Coalition planners designated Dubuque as a temporary detention facility for enemy prisoners of war until the allies could construct camps ashore. Australian landing platform amphibious ship Kanimbla (L.51) transferred 43 Iraqi prisoners to Dubuque (21 March), and she detained a total of 106 prisoners (through 29 April).

The Iraqis ambushed 33 soldiers of the Army’s 507th Patriot Missile Support Company in An Nasiriyah, killing 11 Americans and capturing seven more including Pfc. Jessica D. Lynch, USA (23 March 2003). On 1 April, Task Force 20 rescued Lynch from Saddam Hospital at An Nasiriyah. Marines from Task Force Charlie staged a diversionary attack to draw away Iraqi irregulars, while Boeing Vertol CH-46E Sea Knights from Marine Medium Helicopter Squadron (HMM) 165, embarked on board Boxer, CH-53E Super Stallions, SEALs, and soldiers carried out the rescue. At one point, Dubuque operated as a “lily pad” for two MH-60S Seahawks that flew in the rescue mission. 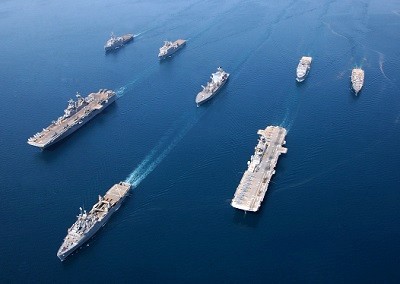 Dubuque answered a distress call from Riddhi Sagar Safina Al Akbar, a small Indian cargo vessel carrying produce in the North Arabian Sea (at 0450 on 15 January 2002). The craft sustained damage to her hull, which resulted in flooding throughout the boat, and repeatedly passed over the bridge to bridge radio: “U.S. Navy help us.” Dubuque launched a small boat, whose crew battled 10–15 foot seas in the darkness, and boarded and assessed the damage of the vessel. The sailors of the boarding party unsuccessfully attempted to pump the water out of the hull, but she continued to founder, and the Americans decided to allow her to sink to avoid a hazard to navigation. Comstock also assisted. The boarders rescued all 16 of the Indian mariners, and brought them to Dubuque for food and water, clothing, and a medical screening. The ship rendezvoused with an Indian coast guard vessel and transferred the sailors (17 January).

The Navy announced that about 50 sailors on board Dubuque reported flu-like symptoms, and the Centers for Disease Control and Prevention (CDC) confirmed at least one of the cases as the Influenza A virus subtype H1N1 (5 May 2009). The disease struck during the worldwide swine flu outbreak and as a result, the Navy cancelled the ship’s June 2009 deployment to Oceania in support of the Pacific Partnership 09 program, humanitarian civic assistance missions. 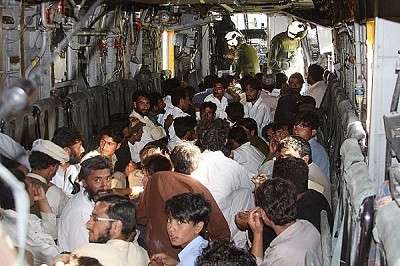 Pirates seized Antigua-Barbuda-flagged merchant vessel Magellan Star in the Gulf of Aden (8 September 2010). The following day, Marines from the 15th MEU, embarked on board Dubuque, covered by helos, and supported by guided missile cruiser Princeton (CG-59) and Turkish frigate Gökçeada (F.494), boarded Magellan Star, rescuing all 11 of the crewmembers and capturing nine pirates. 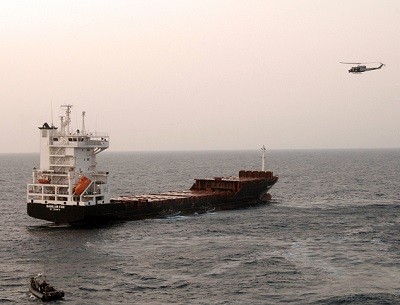