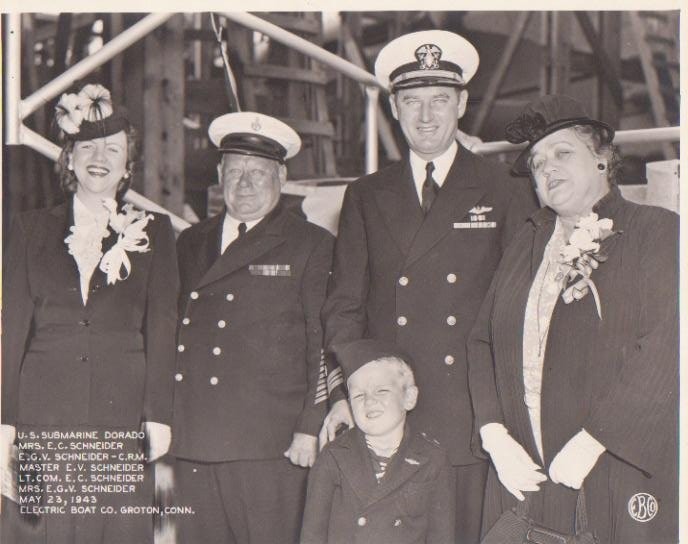 A dolphin fish of the genus Coryphaena, abundant in the Mediterranean and in many parts of the Atlantic, less numerous on the American coast.

Dorado sailed from New London, Conn., on 6 October 1943, for the Canal Zone but never reached her destination. Two days after Dorado's departure, on 8 October 1943, the German submarine U-214 (Oberleutnant zur See Rupprecht Stock, commanding), on her tenth war patrol (the second under Stock) lay a field of 15 mines off Colon, Panama Canal Zone.

On 12 October 1943, a Martin PBM-3C Mariner from Patrol Squadron (VP) 210, Lt. (j.g.) Daniel T. Felix, Jr., patrol plane commander, flying from Guantanamo Bay and covering Convoy GAT-92, spotted U-214 and attacked at 2051, dropping three depth charges and one bomb. Felix and his crew observed no explosions, however, and saw neither debris nor oil that would have indicated destruction of the submarine. During the same patrol, Felix again sighted U-214 at 2233, not far from the scene of the first attack. Aware of the presence of a U.S. submarine in the vicinity, Felix tried to exchange recognition signals but the U-boat immediately opened fire and drove off the Mariner before it could attack again.

Given the fact that the Mariner crew spotted no evidence of a successful attack, it is most likely that Dorado fouled one of the mines laid by U-214 en route to Colon on 14 October. The mine field was detected on 16 October and ten mines swept.

Listed as overdue, presumed lost, on 24 October 1943, Dorado was lost with all hands, 77 souls all told, was stricken from the Naval Vessel Register on 30 October 1943.

Dorado was the name assigned to SS-526 which was to be built at the Boston (Mass.) Navy Yard, but the boat was canceled on 29 July 1944 during construction.