John Lincoln Doneff, born on 12 February 1920 in Newark, Ohio, was appointed a Midshipman from the 17th Ohio District on 30 June 1939. His summer midshipman cruise (8-15 June 1940) saw him serving in the battleship New York (BB-34). Doneff's "industry, sense of humor, and willingness to lend a hand," wrote a classmate, "will admit of only success in the fleet." 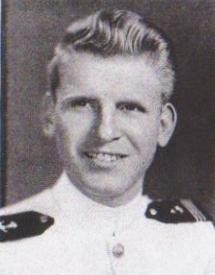 Nicknamed "Bucket," Doneff graduated with the Class of 1943 on 19 June 1942 due to the United States' entrance into World War II in December 1941. Commissioned ensign upon graduation, Doneff served briefly in the Twelfth Naval District (2-7 July 1942), then joined the heavy cruiser Pensacola (CA-24) on 16 July 1942. He was killed in action in the Battle of Tassafaronga on 30 November 1942.

Adjudged ready for sea on 26 June 1943, Doneff stood out of Delaware Bay the following day, bound for Bermuda, British West Indies. Conducting her shakedown training soon thereafter, interspersed with escort duty, rendezvousing with Charles Lawrence (DE-53) to pick up the oiler Merrimack (AO-37) and escort her into Bermuda (19-20 July), the destroyer escort departed the West Indies on 23 July and reached her building yard on the 25th. Following an availability for the completion of hull and electrical work, Doneff reported to Commander in Chief, Atlantic Fleet, for duty on 17 August, sailing for Hampton Roads the same day. After pausing at Norfolk, Va. (18-24 August), the ship transited the Panama Canal on 30 August, reporting to Commander in Chief, Pacific Fleet, for duty upon entering that ocean, then sailed for San Diego, Calif., on 31 August with Task Group (TG) 12.5. Arriving at San Diego on 9 September, she received another availability upon her arrival at San Pedro, Calif., (10-27 September), at the Los Angeles Shipbuilding Corp. yard, then sailed for the Aleutian Islands in company with Engstrom (DE-50).

Doneff arrived at Adak on 6 October 1943, and for the next 15 months escorted merchantmen and the occasional naval auxiliary, logging Chernofski, Dutch Harbor, Attu, Shemya, Amchitka, Kiska, and Massacre Bay as the termini for her voyages in those inhospitable climes. In addition, the ship twice supported the difficult work of Fleet Air Wing (FAW) 4 in that area, during the latter half of April 1944 and the first half of May, and again between 1 and 21 August 1944, serving as plane guard between Attu and the Japanese-held Kuril Islands. On one occasion, on 18 May 1944, at the end of Doneff's first stint of work with FAW-4, a Betty (Mitsubishi G4M Type 1 land attack plane) missed the ship with two bombs. 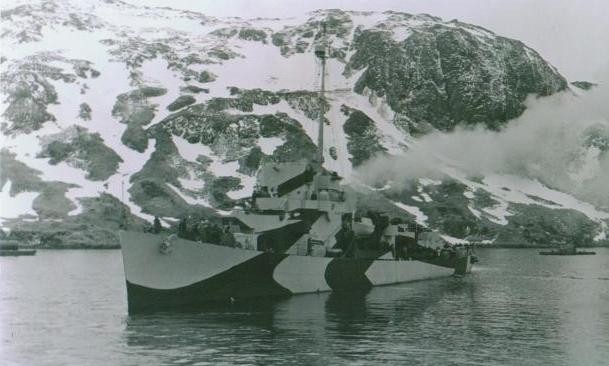 Standing out of Dutch Harbor on 13 January 1945, Doneff, detached from the Alaskan Sea Frontier Forces, left the Aleutians in her wake and set course for San Francisco, Calif., in company with Edward C. Daly (DE-17) and Gilmore (DE-18). Engstrom joined them en route, on the 18th, and the four DE's reached the Golden Gate on the morning of 19 January. Doneff commenced an overhaul at Mare Island Navy Yard, Vallejo, Calif., later that same day. Emerging from the yard on 25 February, Doneff spent the succeeding days engaged in taking on ammunition, engaging in post-overhaul checks, calibrating her degaussing and RDF gear, between Mare Island, the U.S. Naval Frontier Base at Treasure Island, Calif., and San Francisco proper. She returned to Mare Island on 1 March to await assignment following firing practice and a full power run earlier that day.

Following a brief period awaiting assignment at Apra Harbor, Guam, Doneff got underway and patrolled Section 28 (3-11 April 1945), roughly southwest by south of Guam, a period of patrolling marked by her being sent to the scene of a reported plane crash and salvaging wreckage from the downed aircraft (6 April). She escorted submarine Gato (SS-212) to Saipan, in the Marianas, on 12 April, putting to sea later the same day to meet submarine Tench (SS-417) the following day and escort her to Guam. She reprised a patrol of Station 28 (13-18 April), relieved on station by the destroyer Roe (DD-418) on 18 April, then returned to Station 28 on the 20th, relieving Osmus (DE-701).  The following day, Doneff set course for Eniwetok as escort for the battleship Maryland (BB-46), arriving at her destination on the 25th. After fueling from Beagle (IX-112) (26 April), the destroyer escort got underway once more, escorting the attack transport Brookings (APA-140) to Guam (27-30 April), after which the escort saw the submarine Ray (SS-271) safely to sea; Doneff then set course to rendezvous the following day with Spikefish (SS-293) and Dragonet (SS-404), then escorting them to Guam (1 May) and relieving the submarine chaser SC-1026 in the familiar waters of Station 28 before the day was over.

Punctuating her time on Station 28 to pick up a medical officer off Orote Point and deliver him to ARDC-3, rendezvousing with the latter craft and delivering an appendectomy patient, in charge of Lt. (j.g.) Lawrence E. Grate, MC-V(S), to Base Hospital No.18 via motor launch (3-4 May 1945), Doneff then escorted Tench from Apra Harbor to Saipan (11 May), returning to Guam on the 13th to await further orders. After seeing Icefish (SS-367) safely to sea on 15 May, the destroyer escort returned to Guam and dropped anchor in Apra Harbor to undergo a period of repairs and maintenance that lasted through mid-June 1945, after which time Doneff escorted the attack transport Arenac to Saipan (19-20 June) as convoy Guam-Saipan 102.

Doneff sailed on 22 June 1945 and relieved Marsh (DE-699) on anti-submarine warfare (ASW) station at 14-35'N, 152-40'E, northeast by one-half north of Guam, at the end of the second dog watch the following day. Doneff exercised at general drills, fired a depth charge from number six K-gun, practice-fired two Hedgehog projectiles and fired four rounds of 3-inch. She patrolled her station until 27 June, when she received orders to "investigate a reported enemy submarine contact" and consequently left those waters at 0528. Arriving at the designated point at 1300, she began carrying out a retiring search plan; she changed course at 1432 when advised of a potential contact by a search plane. That search negative, Doneff made rendezvous with the escort carrier Kasaan Bay (CVE-69) and destroyer escorts Baron (DE-166) and Emery (DE-28), then took station six miles off the "jeep" carrier's port bow, steaming on a generally northwesterly course. That search again negative, Commander TG 96.9 detached Doneff to resume her lone ASW patrol on 28 June. On 1 July, Doneff picked up a sound contact at 0824, and maneuvered to attack. She fired a pattern of Hedgehog projectiles at 0933, but soon evaluated her target as fish. Relieved on station that afternoon by destroyer Mugford (DD-389), the destroyer escort set course to proceed to Saipan, arriving the next day.

On 8 July 1945, Doneff set course for the Philippines as escort for the amphibious force flagship Appalachian (AGC-1). Ordered to return to Saipan, however, the destroyer escort took departure from the amphibious command ship at 0710 on the 10th, and arrived at her destination late the following day. Another escort mission came up soon thereafter, when Doneff got underway at 1134 on 13 July to shepherd attack transports Rawlins (APA-226) and Winged Arrow (APA-170) to Eniwetok in convoy Saipan-Eniwetok 101. At 1505, on orders from the officer in tactical command in Rawlins, the ship left her station to search for a Japanese prisoner-of-war who, perhaps preferring drowning to captivity, had jumped over the side. After a 36-minute search turned up negative, she returned to her station and the rest of the voyage, concluding on 16 July, unfolded uneventfully.

Underway at 1400 on 18 July 1945, Doneff sailed for Saipan, proceeding independently, and reached her destination, standing in to Saipan harbor, at 1030 on the 20th. She lay at anchor, awaiting orders, for the next three days. As ready duty ship, she got underway at 0757 on 24 July to investigate a plane crash reported off Rota Island, but reversed course at 0917 when ordered to return to port and await further orders.

Again on ready duty on 26 July 1945, Doneff got underway for Medinilla Island to investigate another plane crash at 0927, and lay-to off the southwest side of the island a little over three hours later. Swimmers from the ship recovered a jettisonable aircraft gasoline tank at 1250, and Doneff put a whaleboat in the water at 1320 in charge of Lt. Stewart B. Hobbs, D-V(G), to recover debris, the boat crew picking up a piece of plywood 5-by-18-inches long with a small piece of flesh attached at 1434, mute evidence of the tragedy that had occurred. The whaleboat returned to the ship to be recovered after a little more than an hour more, then Doneff set course to return to Saipan, dropping anchor upon her arrival to again assume ready duty status.

Doneff awaited orders for the next four days (27-30 July 1945), then commenced an availability on the 31st. Soon after the completion of that period of upkeep, the ship got underway for Okinawa, escorting convoy SOK-25, on the afternoon of 6 August. Four days into the voyage, on the night of 10 August, HA1c Paul Evans, Jr., fell overboard from general stores supply ship Kochab (AKS-6). Doneff retrieved the man inside of 30 minutes, and returned him to his ship after SOK-25 reached Buckner Bay safely on 12 August.

Receiving her sailing orders from Bagley (DD-386) the next day (13 August 1945), Doneff sailed for Saipan as a member of the escort unit for convoy OKS-20. Four days into the passage toward the Marianas, lookouts spotted a mine at 19-03'N, 139-35'E at 0752, and .30-caliber rifle fire from the ship exploded it at 0802, Doneff resuming her screening station soon thereafter. OKS-20 reached its destination without incident on 19 August. During the voyage, Japan accepted the terms of the Potsdam Declaration and surrendered, ending hostilities in the Pacific.

Doneff awaited further assignment at Saipan for almost a week, a period punctuated by carrying out sonar exercises with the submarine Dace (SS-247) north of the harbor entrance on 22 August 1945. At 1603 on 25 August, Doneff got underway for Marcus Island, and, joined by the destroyer Mayrant (DD-402) off Saipan, set course for that by-passed Japanese possession. Arriving on the 27th, Doneff began patrolling off Marcus while an emissary from the island traveled out to Mayrant for an audience (1400-1635) with Commo. Vernon F. Grant, the inspecting officer, to discuss capitulation. The two American ships patrolled a scouting line off Marcus overnight, with Commo. Grant ordering Doneff to steam independently during the day on the 28th.  Detached that night, the destroyer escort sailed for Saipan.

After taking on fuel and stores at Saipan (30 August 1945), Doneff got underway immediately to overtake a Marcus Island-bound convoy.  Catching up a half hour after the mid watch ended on 31 August, she relieved Trippe (DD-403) so that that destroyer could proceed independently to Pagan Island. After seeing Task Unit (TU) 94.6.3 safely to its destination on 2 September, Doneff anchored off Marcus, serving as station guardship for almost a fortnight, a period of time punctuated by gunnery exercises on the 13th. Relieved on station by Gilmore, Doneff sailed for Saipan on the afternoon of the 15th, and reached her destination on the morning of the 17th. Doneff conducted one more round-trip to Marcus and back to Saipan before clearing Tanapag Harbor, Saipan, on 24 September for Apra Harbor, Guam, arriving later the same day.

After brief overhaul at Guam, Doneff put to sea on 11 October 1945. Proceeding via Pearl Harbor (20-23 October), the ship then set course for the west coast of the United States in company with Doherty (DE-14), arriving at San Pedro, Calif., on 26 October.