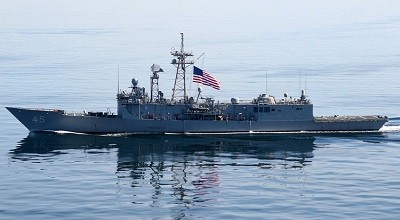 Caption: De Wert knifes through the water during one of her recent patrols. 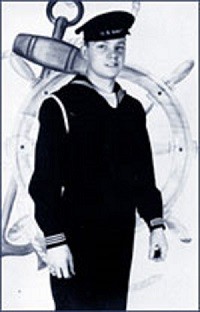 De Wert remained there for a year before heading west and joining the First Medical Battalion, First Marine Division, Fleet Marine Force, at Camp Joseph H. Pendleton, Oceanside, Ca., on 28 July 1950. About a month before, North Korean forces had swarmed southward across the 38th Parallel, precipitating the Korean War. In response to General Douglas MacArthur’s request on 19 July for a division of Marines, the First Marine Division prepared to deploy to the Far East. As a part of that movement, Hospitalman De Wert sailed for Japan on 18 August, embarked in the transport USNS Marine Phoenix (T-AP-195).

Going ashore at Kobe on 2 September 1950 as the First Marine Division deployed through Japan, De Wert embarked in the attack transport President Jackson (APA-18) one week later and sailed for Korea. On 17 September, two days after the first units of the division landed at Inchon, De Wert followed, to participate in the activation and early operations of the division hospital on the outskirts of that seaport. Within a fortnight, the corpsman took part in the liberation of Seoul, the South Korean capital.

Following the successful completion of the Inchon-Seoul campaign, De Wert returned to Inchon with the division and embarked in the attack transport Bexar (APA 237) on 9 October 1950 for movement to the east coast of Korea and the projected amphibious assault on Wonsan. Before the division reached its destination, however, Republic of Korea (ROK) troops had taken the port and thus rendered the assault unnecessary. Ultimately, due to the time consumed by the minesweeping efforts in Wonsan harbor, the division did not go ashore until late October, De Wert landing on the 28th, three days after the initial units.

In its next operation, the division encountered the first Chinese Communist forces of the war in the campaign that ultimately culminated in the gallant breakout from the encircled Chosen Reservoir. De Wert was among the men of the division that reached the port of Hungnam on 12 December 1950, embarking that day in the transport USNS Daniel I. Sultan (T-AP-120) and arriving at Pusan two days later. Eventually, he reached the port of Masan, via the tank landing ship LST Q-58 on the 15th, where, over the ensuing weeks, the division regrouped and received replacements for the losses incurred during the grueling and bitterly fought Chosen campaign.

North Korean guerrillas’ penetrating southward to a point reportedly 60 miles from Pusan dictated the division’s next operation. Acting in concert with ROK Army troops, the Marines succeeded in breaking the back of the guerrilla movement and then pushed north to drive the intruders out of South Korea. De Wert participated in those operations in January and February of 1951, still in the First Medical Battalion of the First Marine Division.

At the end of March 1951, the Second Battalion, Seventh Marine Regiment (2/7), to which De Wert had been assigned on 6 March, headed north, beginning the movement toward the 38th Parallel. During the first few days of April, the leathernecks made good progress, crossing the parallel on 4 April, despite tortuous terrain, landslides and cratered roads, swollen rivers and streams that rendered ferrying and fording difficult, and the frequent use of mines by the enemy.

On the morning of 5 April 1951, near Wonju, 2/7 jumped off in time to attack the objectives assigned it for the day, moving forward with tanks in support against entrenched elements of the Chinese Communist 117th Division, 39th Corps, who resisted stubbornly. As D [Dog] Company, to which De Wert was attached, advanced up a ridge, heavy automatic weapons and small arms fire pinned down a fire team from the company’s point platoon. Seeing a fallen Marine lying seriously wounded in an exposed position, De Wert unhesitatingly rushed forward, treated the man’s wound, then pulled him to a defilade [protected area]. Going to the aid of a second Marine and treating his wounds, the corpsman scrambled back out to the fire-swept ridge to bring back the first wounded man, suffering a leg wound while doing so.

Seeing another Leatherneck hit out on the ridge, De Wert headed out a third time, but found that the man had already died. Wounded in the shoulder while checking that casualty, the gallant corpsman heard a fourth cry for help. Amidst the tumult of battle and still ignoring his own wounds, De Wert began to administer aid to the wounded Marine, but received a fatal wound in the act of doing so.

A witness to De Wert’s actions that day, Private 1st Class Clarence D. Whipp, USMCR, later wrote admiringly of the corpsman’s “complete disregard for his own safety and intense enemy fire.” For “conspicuous gallantry…above and beyond the call of duty,” Hospitalman De Wert was awarded, posthumously, the Medal of Honor that also cited his “courageous initiative, great personal valor, and heroic spirit.” Secretary of the Navy Dan A. Kimball presented the Medal of Honor to De Wert’s mother Evelyn on 27 May 1952. 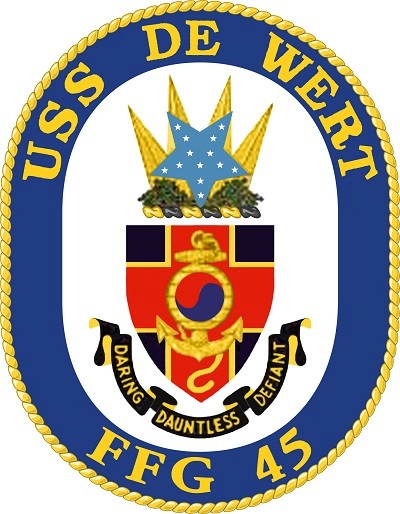 Crest
The crest commemorates Hospitalman De Wert's conspicuous gallantry, for which he received the Medal of Honor (posthumously), represented by the reversed light blue star. The four rays, for hope, represent the four times De Wert courageously exposed himself to enemy fire to save his wounded shipmates. The small stars represent valor; the sprigs of oak, strength. The ship's motto "Daring, Dauntless, Defiant," expresses De Wert's courage and sacrifice, and serves as an inspiration to the complement of the ship named in his honor.

Shield
Dark blue and gold are the colors of the Navy. The scarlet cross, edged in gold, represents De Wert’s service as a Hospitalman with the U.S. Marine Corps. The anchor and globe are adapted from the Marine Corps emblem, and also symbolize the world-wide mission of the ship. The taeguk superimposed thereon denotes De Wert’s service in Korea, where he gave his life.

De Wert knifes through the water during one of her recent patrols.

De Wert operates with Destroyer Squadron 14 at Mayport, Fla., and is scheduled to decommission on 4 April 2014.