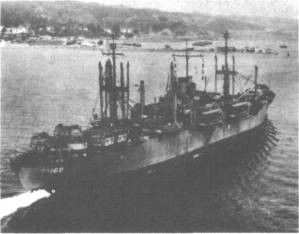 Counties in Nebraska and South Dakota.

Deuel sailed from San Diego 25 November 1944, and after training at Pearl Harbor staged at Saipan for the invasion of Iwo Jima. On 19 February 1945 she helped land the 5th Marines in the initial assault. She stood off the island for 6 days, embarking casualties for transportation to hospitals at Guam. After replacing her boats at Florida Island, and training at Espiritu Santo, she sailed from Ulithi 4 April to transport support troops to Okinawa where she embarked casualties for transfer to Saipan.

From 28 May to 27 August 1945 Deuel operated in the Philippines on transport and training duty. She carried Army troops to Japan for occupation duty in September, then returned to San Pedro Bay, Leyte to embark more troops and a civil administration party which she landed at Kure between 5 and 11 October. Assigned to "Magic Carpet" duty, she carried servicemen from the Pacific home to the west coast until January 1946, then sailed for the east coast where she was placed out of commission 17 May 1946, berthed at Norfolk.

Recommissioned 23 October 1950 Deuel operated from her base at Norfolk on exercises on the east coast and in the Caribbean. In the summer of 1951 she transported an Engineer Boat and Shore Regiment and a Naval Beach Unit to Thule, Greenland. Between 21 August 1952 and 6 February 1953 she sailed to where she took part in Operation "Mainbrace," the NATO amphibious exercises in Denmark, and then continued to the Mediterranean for duty with the 6th Fleet. Between 5 August and 23 October 1953 Deuel voyaged by way of the Panama Canal to bring Marines to Yokohama, Japan, and in 1952 and 1955 she delivered naval construction Batallion men and equipment to Casablanca, French Morocco. Deuel was placed out of commission in reserve 27 June 1956.