Named in honor of three brothers bearing the last name Crommelin, all of whom were graduates of the U.S. Naval Academy and decorated veterans of the Second World War.

Vice Adm. Henry Crommelin, USN (1904–1945) was awarded a Silver Star for gallantry while commanding Destroyer Squadron (DesRon) 50 during the Gilbert Islands Campaign. Additionally he was awarded a Bronze Star for his marked heroism during the amphibious assault and subsequent capture of Guam, Mariana Islands. Following the war, he served as the Assistant Chief of Naval Personnel; Chief of Staff to Commander Destroyers, U.S. Atlantic Fleet; commander of the heavy cruiser Des Moines (CA-134); commander of Battle Division 2; and commander Naval Base, Newport, R.I., from June 1957 until his retirement on 1 November 1959. 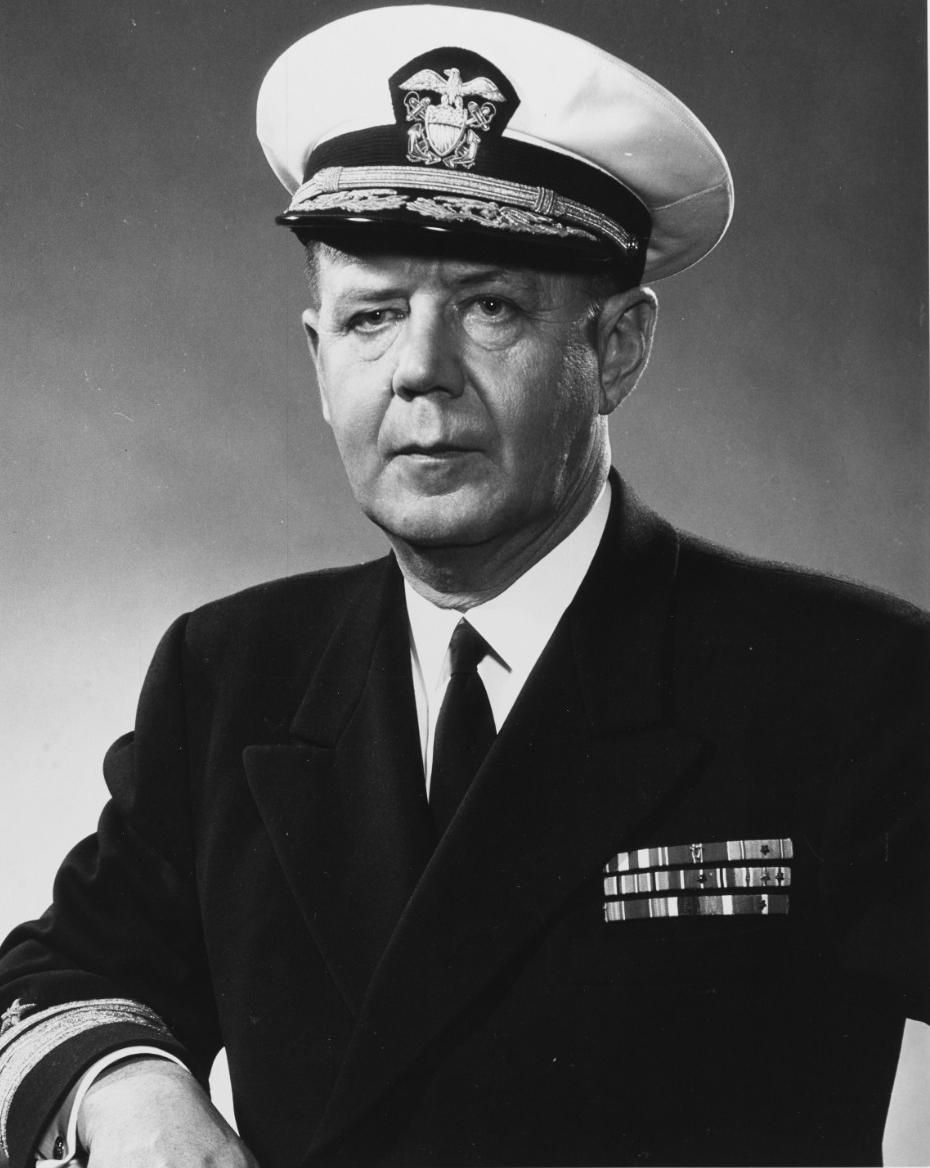 Cmdr. Charles L. Crommelin (1909–1945) was awarded the Navy Cross for extraordinary heroism while serving as the commander of Carrier Air Group 12, on board the aircraft carrier Randolph (CV-15) during the first carrier task force raid on Japan in February 1945. He was also awarded a Flying Cross for leading an aerial raid on Marcus Island. During pre-invasion strikes on Okinawa, Japan, in March 1945, Cmdr. Crommelin was killed when his plane was shot down during a combat mission.

Lt. Cmdr. Richard G. Crommelin (1917–1945) received a Navy Cross for demonstrating extraordinary heroism as a fighter pilot during the Battle of the Coral Sea (4–8 May 1942). He also received a Gold Star in lieu of a second Navy Cross for his daring actions during the Battle of Midway (4–7 June 1942). Lt. Cmdr. Crommelin later served as the commander of Fighting Squadron 88 (August 1944–15 July 1945). He was killed on 15 July as a result of a mid-air collision with another American plane near Hokkaido, Japan.

Crommelin was built to provide air surface and undersea protection for underway replenishment groups, convoys, amphibious forces and other military and merchant shipping. The warship arrived at her first homeport in Long Beach, Calif., in August 1983. Assigned to DesRon 9, Crommelin got underway for her post-commissioning shakedown in the fall of 1983. In January 1984, she was re-assigned to Surface Squadron 1 and subsequently began a six-month availability period at Todd Pacific Shipyard at San Pedro. As of 1 September 1984, Crommelin was assigned to DesRon 17.

On 21 February 1985, Crommelin got underway with the Constellation (CV-64) Battle Group for a deployment to the Western Pacific Ocean and Indian Ocean. In the course of these operations, Crommelin conducted her first successful missile engagement against a high-speed maneuvering target. The guided missile frigate ended her deployment on 24 August. Her expeditionary performance earned her multiple departmental and division excellence awards, as well as her first Battle Efficiency Award.

In January 1987, Crommelin was re-assigned to DesRon 13 and then later that spring, on 13 April, she set out on her first accelerated deployment with the Constellation Battle Group. In the course of the deployment Crommelin became one of the first guided missile frigates of her class to operate extensively in a deployed environment with two LAMPS III helicopters embarked. From 1 July to 25 August, Crommelin steamed with the Middle East Force and at one point had the conspicuous duty of escorting a convoy of several Kuwaiti tankers. She later received a Meritorious Unit Commendation for her active role in these operations. 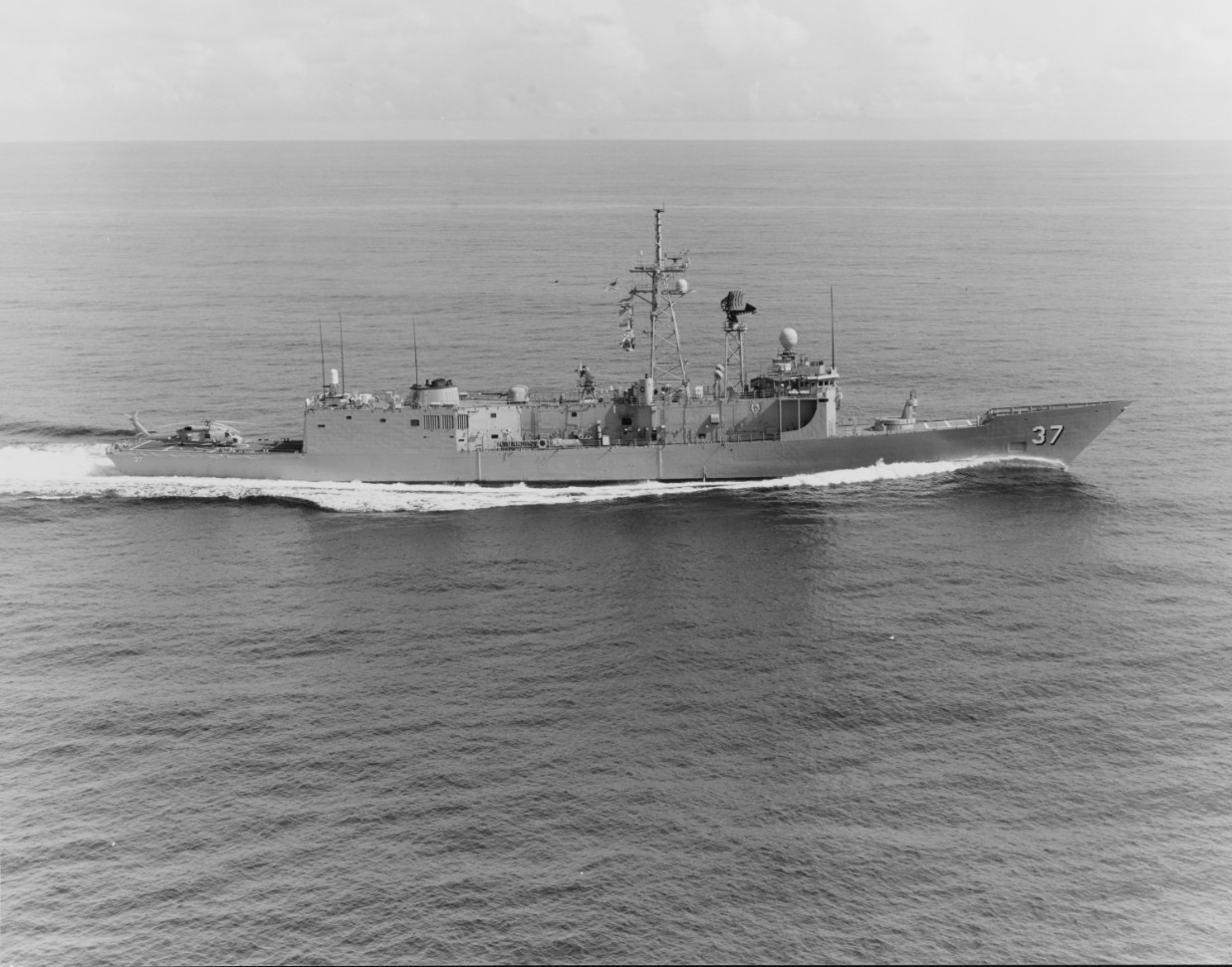 Re-assigned to DesRon 9 on 1 January 1988, Crommelin received a second Battle Efficiency Award on 6 March. The warship then went into dry dock at the Todd Pacific Shipyard at San Pedro for an availability that lasted (31 May–23 September). The following year she deployed to the Arabian Gulf (17 March–22 September 1989).

Crommelin stood out on 9 November 1990 for a Joint Service Counter Narcotics Operation in the Central/South American/Caribbean Theater. She participated in these operations until 28 February 1991 and then shortly after her return home received a Joint Services Meritorious Unit Award for her outstanding performance.

On 1 September 1991, Crommelin shifted homeports to Pearl Harbor, H.I., and joined DesRon 31. From March to September 1992, the warship underwent an extensive selected restricted availability at Pearl Harbor Naval Shipyard and received major upgrades to her combat systems and engineering equipment. Beginning in November of that same year Crommelin set out on her second four-month counter narcotics cruise in the Caribbean Sea. Shortly after her return to Pearl in March 1993, Crommelin was assigned to Commander Naval Surface Group, Middle Pacific.

Underway with the Kitty Hawk (CV-63) Battle Group (1 July–14 December 1994), Crommelin operated in the Western Pacific largely for the purpose of carrying out Korean Contingency Operations. Her command history report indicates that the warship’s “prosecution of a Chinese Han class submarine,” during the cruise earned her a Meritorious Unit Commendation.

Following a three-month work up cycle, Crommelin deployed again on 20 May 1996 with the Carl Vinson (CVN-70) Task Group bound for the Western Pacific. Crommelin spent much of the voyage operating in the Arabian Gulf where she engaged in a variety of missions. These included escorting vessels through the Strait of Hormuz, patrolling the Northern Arabian Gulf, and conducting Maritime Interdiction Operations. She returned to Pearl Harbor on 20 November 1996.

From January to March 1997, Crommelin received extensive upgrades to all of her major weapons systems and her engineering plant. Following an availability period, her crew commenced another workup for her pending deployment with the Fifth Fleet.

On 21 February 1998, Crommelin cleared Pearl Harbor for another Western Pacific deployment. The warship distinguished herself during the deployment by setting a Fifth Fleet record for the number of vessels boarded and the tonnage of illegal Iraqi oil sized and diverted. She returned to Pearl Harbor on 21 August.

During the first part of 1999 Crommelin underwent “a demanding nine week private sector SRA.” She then had a number of repairs and upgrades completed prior to commencing an inter-deployment training cycle, which her crew was able to complete three months ahead of schedule. On 24 August 1999, the warship stood out of Pearl and started a three-month deployment to the Eastern Pacific in support of counter narcotics operations. During the cruise, her LAMPS detachment flew more than 350 mishap free helicopters flights and the warship was deemed a key player in four major cocaine seizures. Crommelin dropped her anchor at Pearl on 24 November.

Crommelin got underway with the Abraham Lincoln (CVN-72) Battle Group on 18 January 2000. After participating in a composite training unit exercise off the coast of California, she accompanied Abraham Lincoln beginning in July, on the battle group’s Western Pacific 2000 deployment. In the course of the deployment Crommelin’s Visit Board Search and Seizure team boarded 18 non-compliant vessels, 12 of which they discovered to be smuggling Iraqi petroleum. Crommelin arrived back in Hawaiian waters on 17 February 2001.

From 18 April to 12 June 2001, Crommelin was dry docked for a selected restricted availability. The following year in January 2002, the guided missile frigate received a Surface Ship Safety Award and then later that summer, in July, participated in a multi-national Rim of the Pacific exercise.  Crommelin  deployed for counter narcotics operations off the coasts of Central and South America (22 October 2002–22 April 2003). In the course of those operations, she was credited with the interdiction of six metric tons of cocaine. Just a short time after returning to Pearl Harbor, Crommelin began an inter-deployment training cycle and became the first warship there to become Emergency Surge Ready.

On 12 May 2004, Crommelin set out on a Southern Command deployment to help thwart the flow of illegal narcotics into the U.S., via Eastern Pacific sea routes. Her efforts contributed to the disruption of multiple drug runs and the seizure of 1.8 tons of illegal drugs. In mid-July Crommelin steamed to the waters off Peru, and commenced participation in UNITAS 45-04 operations. The warship also steamed to Panama and conducted an anti-terrorism patrol in the Panama Canal Zone. During this period, on 29 September, Crommelin boarded the fishing vessel San Jose and recovered 525 bales of cocaine. That same night she also assisted a distressed fishing craft and consequently rescued 93 migrants found on board the vessel. She returned to Pearl Harbor on 12 November.

In 2005, Crommelin underwent a demanding year of exercises, training operations, and maintenance. During the month of June, the warship participated in exercise Lead Shield and Roguex off the cost of Los Angeles and Long Beach, Calif. Crommelin later took part in the massive training exercise Northern Edge ’05 and then in late August joined a Hulkex that sank the ex-Fife (DD-991) and ex-Oldendorf (DD-972).

Crommelin set out from Pearl Harbor for another Pacific Ocean deployment on 15 June 2009. From 18 to 25 June, she participated in a Cooperation Afloat Readiness and Training operation, during which she patrolled with a U.S. Coast Guard operated Lockheed C-130 Hercules, as well as the Micronesian Patrol Boat Independence. Crommelin later received a Coast Guard Special Operations Ribbon for her contribution to the operations.

Between 20 and 23 July 2009, Crommelin supported the Pacific Command Theater Campaign Plan by conducting a port visit to Lumut, Malaysia, and completing a training exercise with the Royal Malaysian Navy. In September, the warship successfully completed a Ship Anti-Submarine Warfare and Effectiveness Measure exercise and then in November she participated in an annual bi-lateral exercise with the Japanese Maritime Self-Defense Force. Crommelin arrived back at Pearl Harbor on 15 December.

In 2010, Crommelin participated in exercise Valiant Shield and deployed to the Western Pacific (3 August–14 December).

As indicated by the ship’s 2011 Command History Report Crommelin entered her 28th year of service as an active duty warship and in the course of an All Hands evolution that year she “began to show her age during multiple engineering assessments.”

After 29 years as a commissioned U.S. warship, Crommelin was decommissioned at Pearl Harbor, H.I., on 26 October 2012 and then stricken from the U.S. Naval Vessel Register five days later on 31 October.

On 19 July 2016, during exercise Rim of the Pacific 2016 the ex-Crommelin was sunk as target practice north of Kauai, H.I.