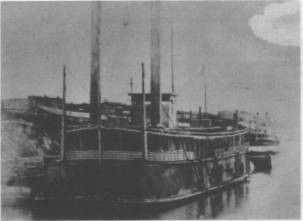 A leaping insect noted for the chirping notes the male makes by rubbing together parts of the forewings.

Between 4 February and 7 April 1863, Cricket served on guard duty at Memphis, Tenn., during which time she seized a quantity of cotton on Delta and Forest Queen on 15 March and landed it at Cairo.

Reassigned to the White River Station between Memphis and the Arkansas River, Cricket patrolled the Mississippi to prevent the crossing of Confederate troops and supplies and to keep the banks free from hidden batteries and guerrillas. She engaged a battery above Argyle Landing on 2 May and another near Greenville, Miss., on 4 May.

In August 1863 she joined Lexington and Marmora in an expedition up the White River. Cricket continued into the Little Red River and on 14 August captured the last two Confederate army transports in the area, Kaskaskia and Thomas Sugg, returning to the Mississippi under frequent musket fire from Southern troops ashore.

In November and December 1863 Cricket convoyed troop transports on the Tennessee River and cleared the river banks of guerrillas, as she supported Army movements. She then joined the naval forces on the Red River Station, and participated in an expedition up the Black and Ouachita Rivers in Louisiana from 29 February to 5 March 1864, supporting the Army. Serving as flagship for Admiral D. D. Porter, Cricket and her squadron ascended the river as far as Springfield Landing, La., when news of a Confederate victory at Pleasant Hill called them back to their station. Hampered by falling water and the difficulty of making sharp turns while going downstream with the current, the squadron was attacked again and again by Confederate troops as it returned to the Mississippi. On 26 April Cricket fought off capture when a boarding attempt was made suddenly by 1,200 soldiers as she ran past a battery of 18 artillery pieces. She was struck 38 times and lost half her officers and men. She brought Admiral Porter safely to Black Hawk and sailed to Mound City for repairs.

Out of commission from 31 May to 13 August 1864 when repairs were completed, Cricket returned to duty on the White River Station until the end of hostilities. She was decommissioned 30 June 1865 and sold 17 August 1865 at Mound City, Ill.