A city in Kentucky.

The steel hull, twin-screw, steamship Cincinnati – built in 1908 at Danzig, Germany, by F. Schichau and operated in the transatlantic passenger trade by the Hamburg-America Line – was interned by the Collector of Customs at Boston, Mass., upon the entry of the U.S. into the World War (6 April 1917), although the resident directors of the Hamburg-America Line professed uncertainty “as to the ownership of the vessel – she having been ‘reported sold, before the United States entered the war, to Swedish interests.’” 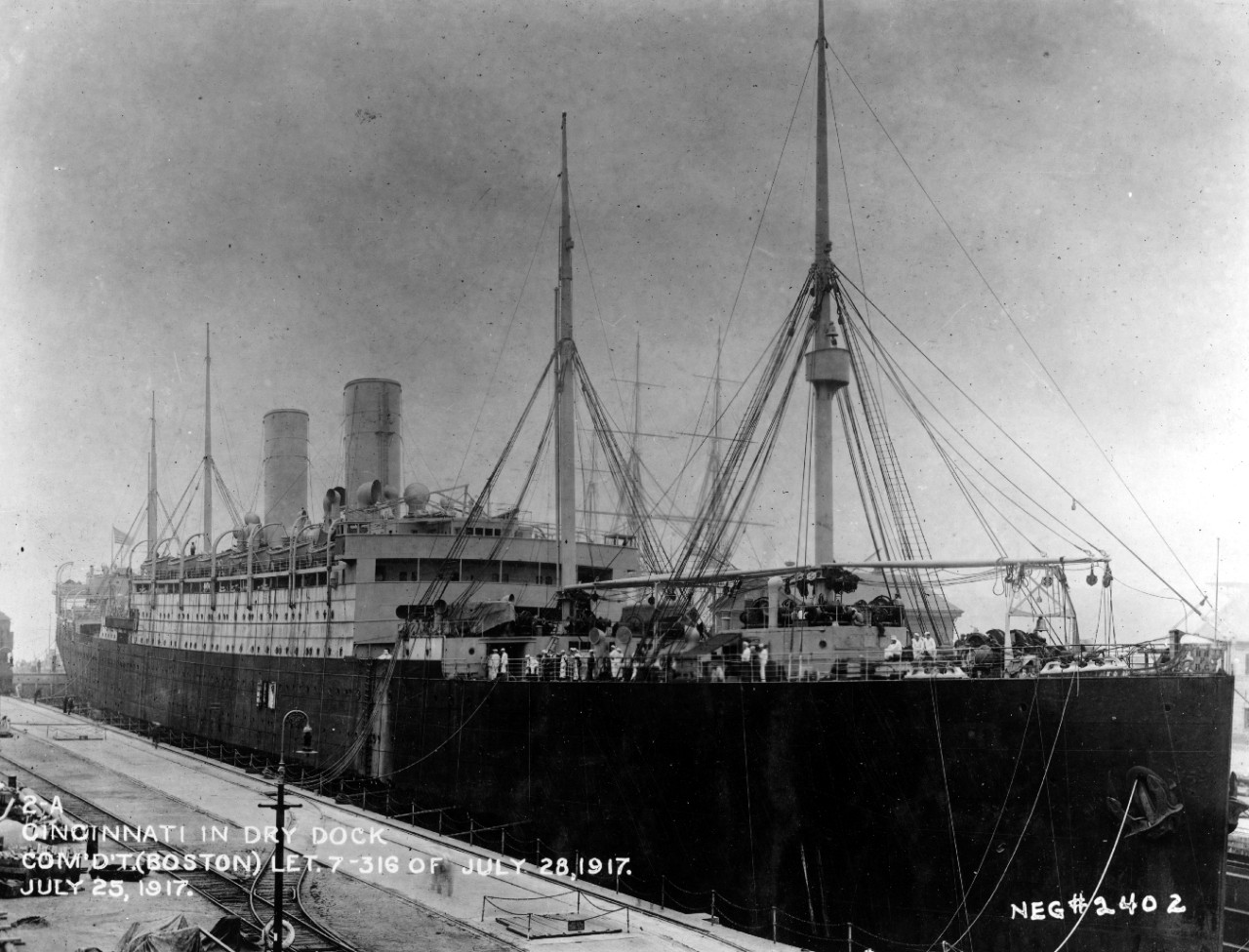 Transferred to the Navy on 26 July 1917, renamed Covington and given the identification number (Id. No.) 1409, the ship underwent repairs for “malicious damage” at the hands of her German crew, and was converted into a troop transport at the Boston Navy Yard. She was commissioned there on 28 July 1917, Capt. Raymond D. Hasbrouck in command. 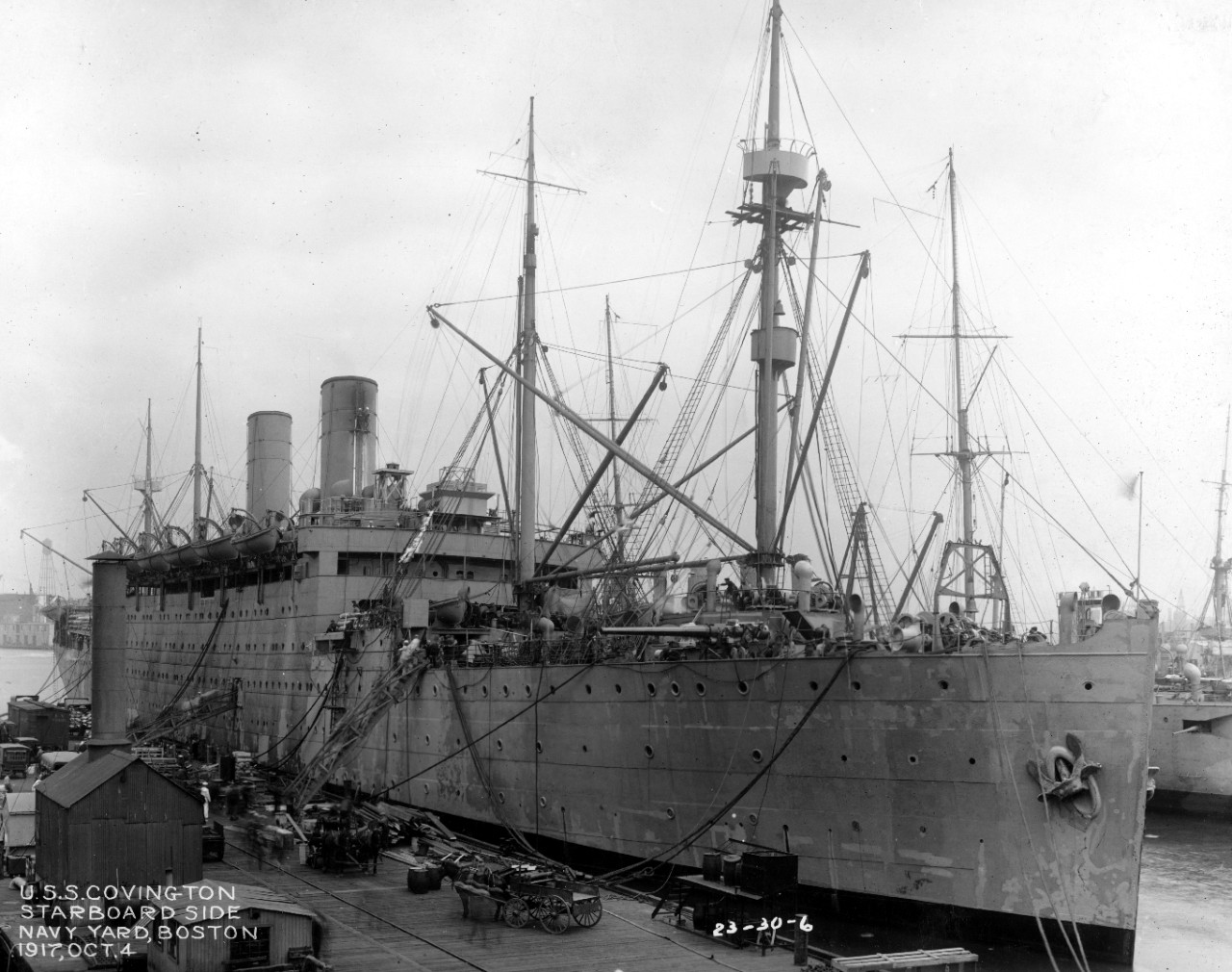 Covington cleared the Boston Navy Yard and steamed to Hoboken, N.J., to transport the troops of the American Expeditionary Force (AEF). As a unit in Convoy Group No. 9, Covington embarked 3,385 troops and departed Hoboken on 18 October 1917. Steaming eastbound across the Atlantic, she reached St. Nazaire, France, on 1 November, and upon arrival disembarked the troops and landed their equipment. The transport got underway again on 18 November and steamed in to Hoboken on 29 November. She made her second voyage to France, with 3,457 troops embarked, as part of Group No.14. Departing Hoboken on 14 December, she raised Brest, France, on 27 December, two days after Christmas.  After landing her troops and equipment, she cleared Brest on 17 January 1918, in company with Pocahontas (Id. No. 3044), escorted by Reid (Destroyer No. 21), Flusser (Destroyer No. 20), Smith (Destroyer No. 17), and Lamson (Destroyer No. 18) and stood in to Hampton Roads, Va. on 30 January. Shifting back to Hoboken, she embarked 3,448 troops and departed with Group No. 21 which included George Washington (Id. No. 3018) and President Lincoln on 18 February. The group rendezvoused with its escorting destroyers on 3 March and reached Brest without incident on 4 March. As on previous trips, she disembarked her passengers and their equipment and prepared for the return voyage. Standing out of Brest on 10 March in company with George Washington, escorted by Smith, destroyer Isabel (S. P. 521), and Warrington (Destroyer No. 30), she steamed in to New York on 22 March. Covington shifted across the Hudson River after disembarking her westbound passengers. Back at Hoboken, she embarked 3,591 more troops and departed as part of Group No. 28 with President Grant (Id. No. 3014) for France on 10 April. Raising Brest on 22 April, she unloaded and then departed again for the U.S. on 25 April, escorted by Roe (Destroyer No. 24) and Monaghan (Destroyer No. 32). Standing in to Hoboken on 5 May, she embarked 3,750 troops, and departed on 10 May with the other transports of Group No. 35. The ships reached Brest on 23 May and disembarked their troops. Covington was underway again on 27 May. Clearing Brest, she arrived back at Hoboken on 5 June, and sailed on 15 June as part of Group No. 35 with 4,133 troops embarked. Having made the transit without incident, the group, including Covington, George Washington, Wilhelmina (Id. No. 2168), Lenape (Id. No. 2700), DeKalb (Id. No. 3010), and Rijndam (Id. No. 2025), stood in to Brest on 27 June, where they again disembarked troops and landed their equipment. With the completion of this sixth voyage, Covington had transported 21,764 troops of the AEF to France.

On 30 June 1918, Convoy OR 51, consisting of Covington and the transports DeKalb  (flagship of convoy), George Washington, the Italian transport Dante Alighieri, Lenape, Rijndam, Wilhelmina, and Princess Matoika (Id. No. 2290), departed Brest heading westward toward the U.S., escorted by Little (Destroyer No. 79) (escort flagship), Porter (Destroyer No. 59), Reid, Smith, Jarvis (Destroyer No. 38), Cummings (Destroyer No. 44), and Conner (Destroyer No. 72). The speed was not quite fifteen knots, the weather fair and the sea calm. DeKalb was in the center leading the five columns and Covington to port of her and abreast as No. 2 from left. Smith’s position was port flank and quarter of convoy, Porter’s flank and bow, 1,000 yards ahead; Conner’s port bow, Little’s 1,500 yards ahead, Cummings’ 1,000 yards ahead on starboard bow, Jarvis’ 600-1,000 yards off the starboard flank, and finally Reid’s 600-1,000 yards off starboard flank and quarter. At 5:20 p.m. on 1 July, the convoy received a submarine warning from the Flag Office at Brest, ordering a course change. Little radioed Brest acknowledging the directive at 7:30 p.m.

Around 9:15 p.m., lookouts on board Covington sighted the wake of a torpedo fired by U-86 (Oberleutnant zur See Helmut Patzig commanding) heading for the ship, 200 yards on the port beam. About ten seconds later, the torpedo hit at the forward engine room bulkhead on the port side, well below the water line, throwing a mass of water and debris high in the air. Shortly after the hit, gun No. 6, on the port quarter, opened fire on what appeared to be a periscope wake. The ship took a quick list to port of about 20 degrees; then, as the water found its way across the ship, swung back to a five degree list. The main engines, however, were at once put out of commission, and the chief engineer soon reported that the water had completely flooded the ship’s two largest compartments, making it necessary to abandon ship. Immediately after the torpedo struck, Smith opened a depth charge barrage and circled Covington; in short order, Porter and Cummings carried out barrages as well. Meanwhile, as the torpedoed ship lay helpless, liable to be hit again, she was abandoned by the officers and crew in excellent order. 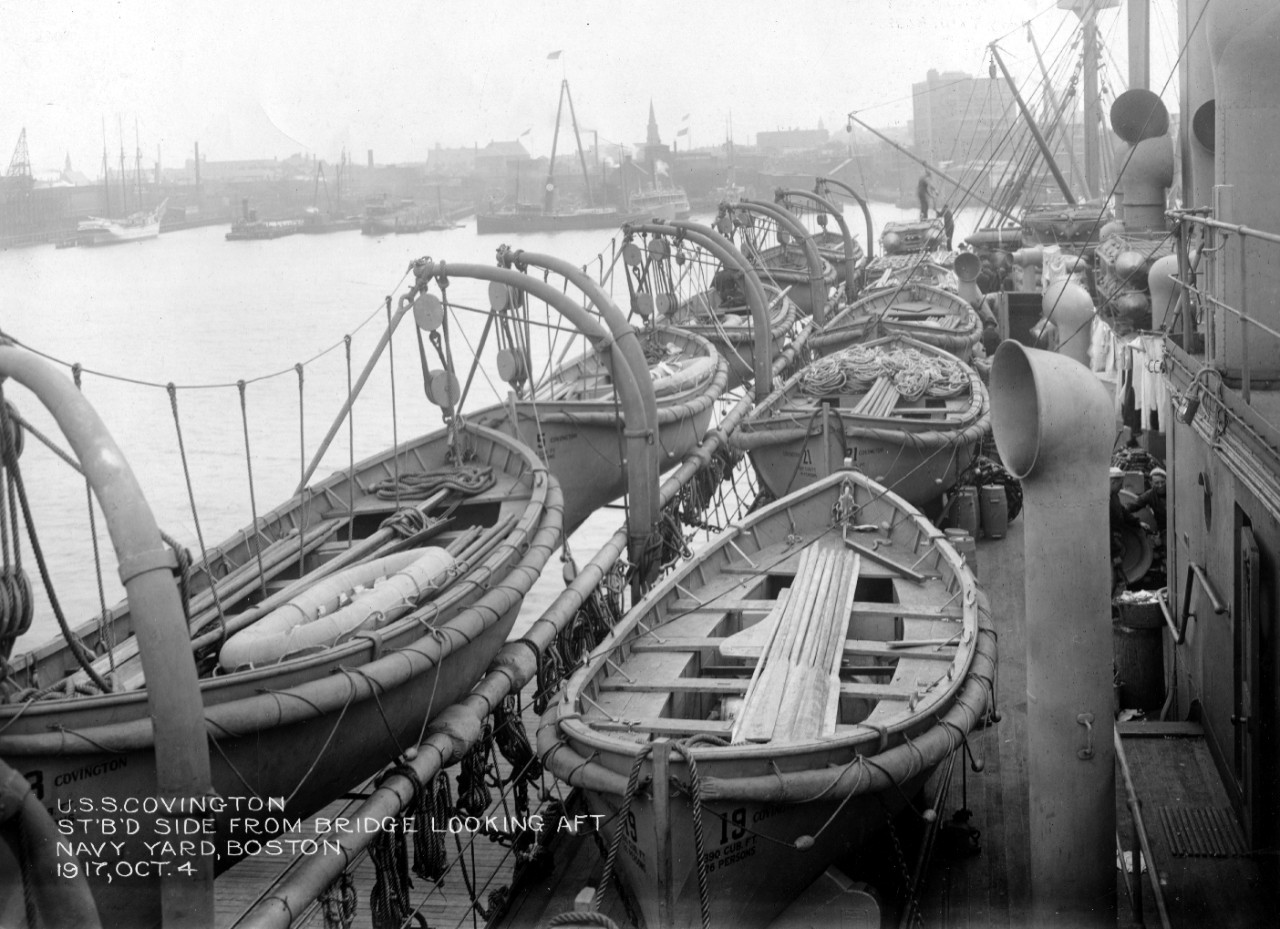 Caption: Looking aft from Covington’s bridge down the starboard side on 4 October 1917 gives the viewer an appreciation of the lifeboat-handling arrangements that existed at the time the ship was torpedoed by U-86. The boats, odd-numbered on the starboard side, carry the name of the ship, as well as give the number of men [26] to be embarked in each. The difficulty of handling this many boats, without power, in the dark, and on board a listing ship – can only be imagined. (U.S. Navy Bureau of Ships Photograph, RG 19-E Collection, Box 5, Folder H, National Archives and Records Administration, Still Pictures Branch, College Park, Md.)

Covington lowered 21 of her 27 lifeboats without lights to guide the work, with the ship listing badly, and, since she had lost steam, without the aid of a single winch. Sadly, three men – Sea2c Joseph P. Bowden, USNRF; Sea2c Alfred S. Payne, NNV; and Sea2c Lloyd H. Silvernail, USN – fell into the sea and drowned in the effort.

Smith took the survivors on board expeditiously while a working party of 30 officers and men remained on board the doomed troop transport, collecting records, charts, and equipment. At 4:00 a.m. on 2 July 1918, a salvage party from Smith boarded Covington. Afterward, Smith headed for Brest at full speed at 5:20 a.m. Concord (Id. No. 773) and the British tugs Revenger and Woonda came up and took Covington under tow.  The gradual sinking of the ship, however, finally made progress impossible and after towing her approximately 25 miles, the salvage party was taken off at 2:10 p.m. Covington began to sink rapidly by the stern at 2:30 p.m., and at 2:32 p.m., she slipped beneath the surface. 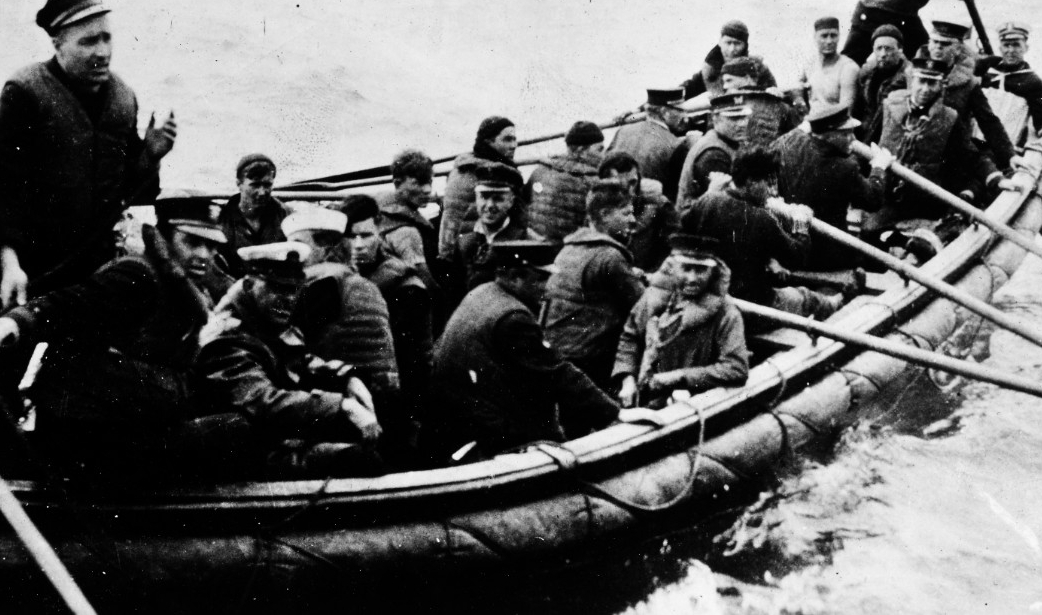 Caption: Lifeboat from Covington, perhaps one of those seen in the above photograph (and at capacity) nears a rescue ship. (Naval History and Heritage Command Photograph NH 1620) 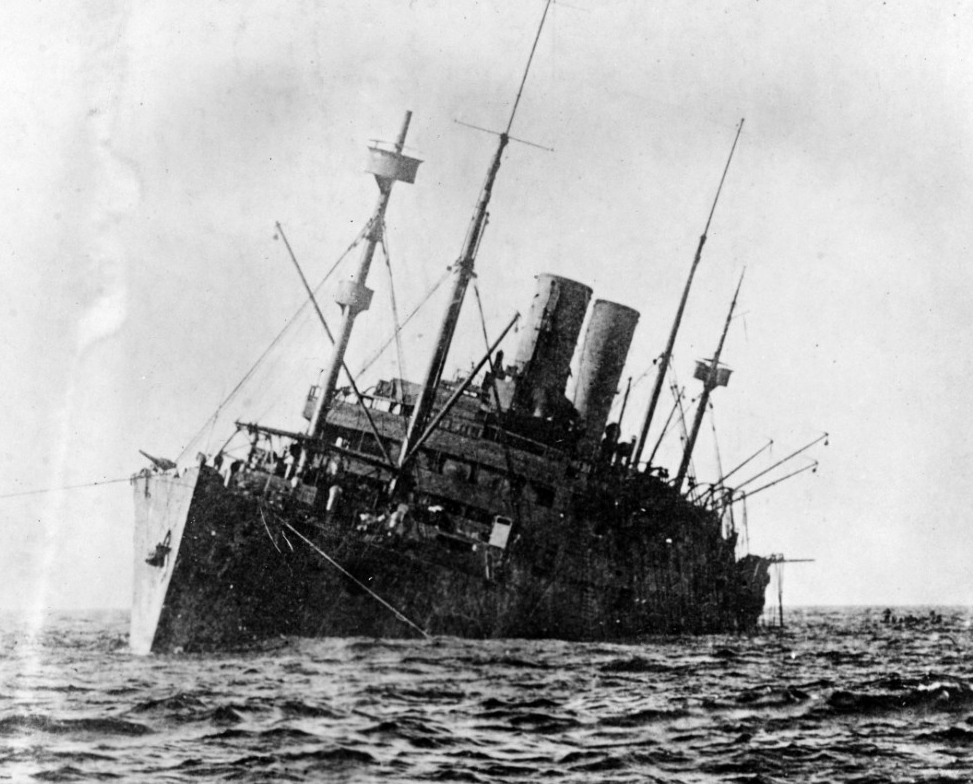 Smith was later joined en route by Wadsworth (Destroyer No. 60), Shaw (Destroyer No. 68), and Nicholson (Destroyer No. 52) and the French gunboats Conquerante and Engageante. Smith, with 743 survivors, proceeded to Brest, while Nicholson, with Capt. Hasbrouck and the salvage crew embarked, arrived at the same port a few hours later. Of all those on board Covington, only six men, of 776 souls on board, were lost, the three men who perished in the perilous boat-lowering operations and three members of her engineering force (two of whom most likely died in the initial explosion of the torpedo) – F3c Ernest C. Anderson, USN; F2c Ambrose C. Ford, USNRF; and F1c William H. Lynch, Sr., USN. 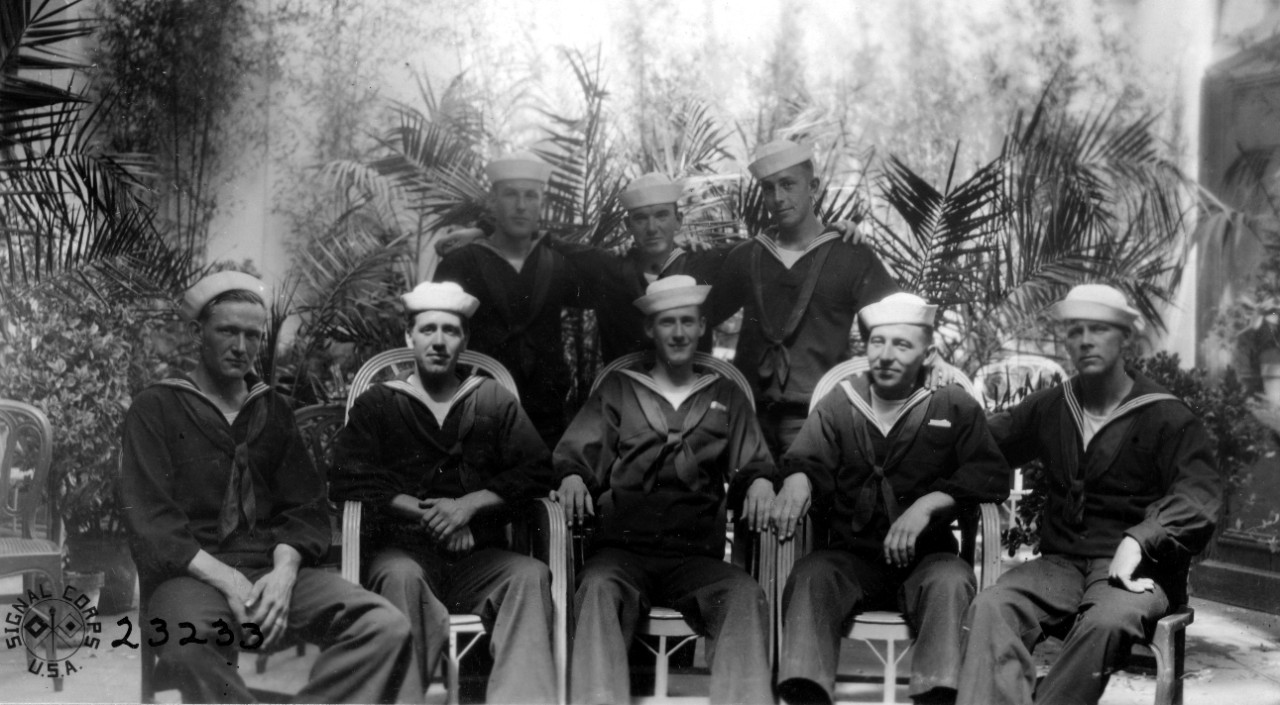 Covington was stricken from the Navy list on 26 August 1918.