Any of various important food fishes related to the weakfish and the croaker of the Atlantic coast. 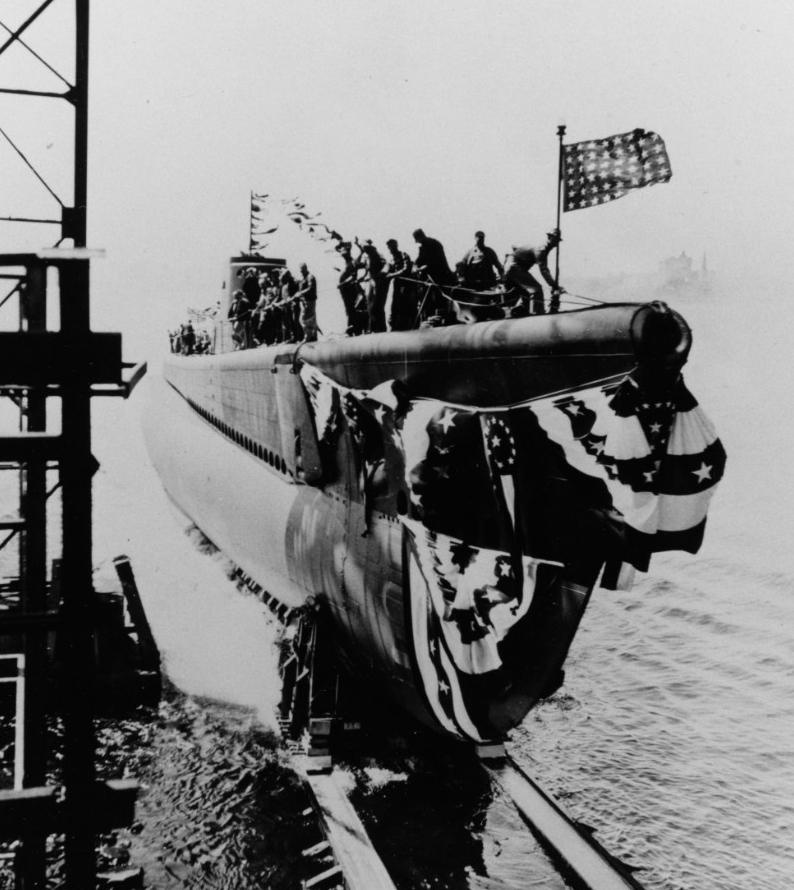 Caption: Corvina slides down the ways at Groton on 9 May 1943. (Naval History and Heritage Command Photograph NH 79754) 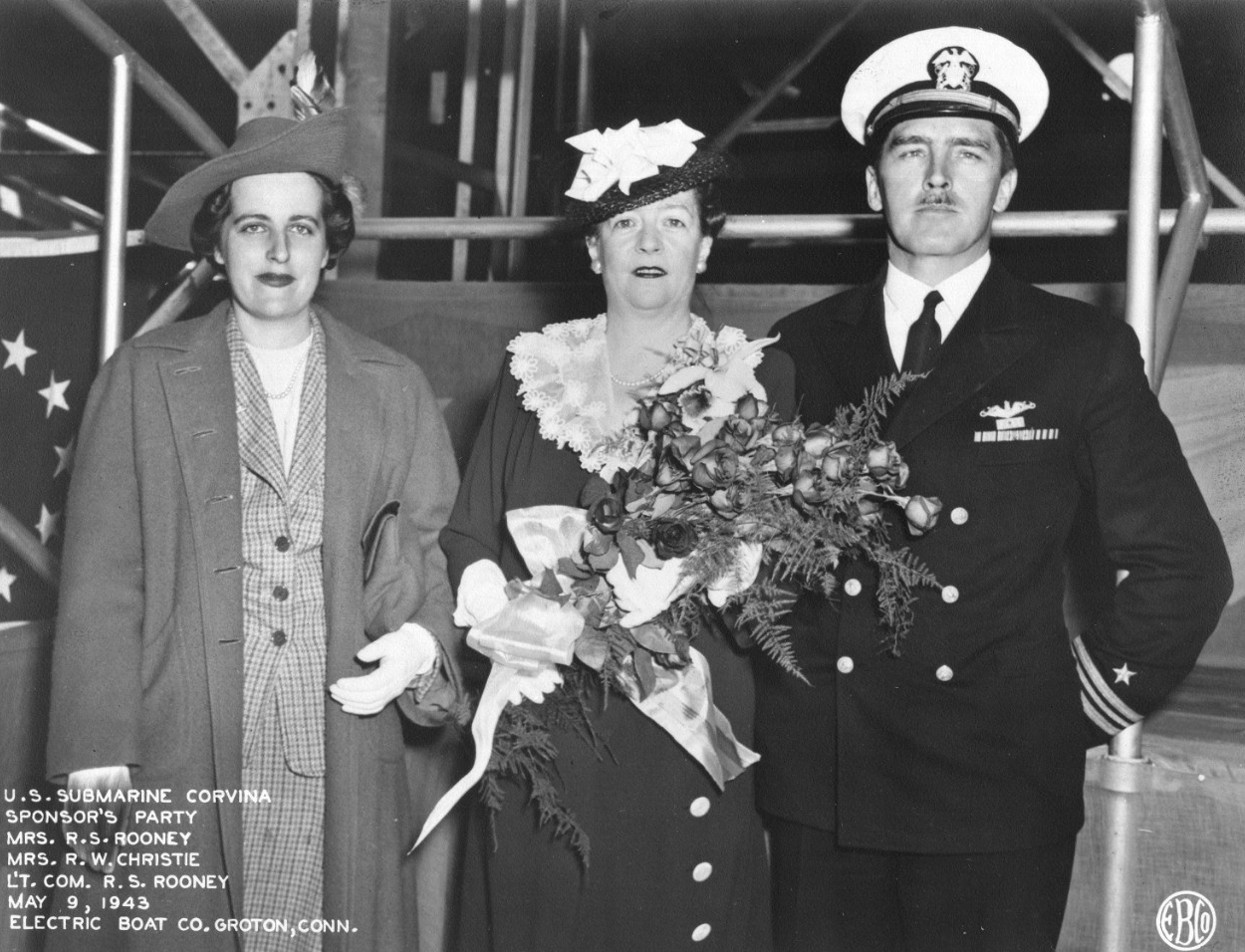 Commissioned on 6 August 1943, Cmdr. Roderick S. Rooney in command, Corvina conducted her shakedown cruise from 9 August – 7 September 1943 off New London, Conn., returning to the navy yard for minor repairs. She received orders to make way to Pearl Harbor immediately. Clearing New London on 18 September 1943, Corvina sailed to the Panama Canal Zone, arriving at Coco Solo on 26 September to refuel and take on stores. She arrived at Pearl Harbor on 14 October 1943.

Corvina arrived during a momentous time in the Pacific Theater. Navy planners decided to open up a second front against the Japanese, and turned their attention to the Gilbert Islands. With the Solomon Islands secured, the Gilberts were chosen because of the direct line of communication available from the south, the airfields they could provide for U.S. fighter aircraft, and the atolls were also less strongly defended than the Marshalls. The invasions of Tarawa (Operation Galvanic), Makin (Operation Kourbash), and Apamama (Operation Boxcloth) were set for 20 November 1943. Task Force Fifty-Three (TF 53) was charged with landing the Second Marine Division at Tarawa. Along with nine other submarines, Corvina was to sail to Tarawa in anticipation of the Galvanic landings.

Corvina’s crew spent three weeks in Oahu conducting training and other operational exercises. They also were able to enjoy some free time swimming, relaxing on the beach, visiting the Royal Hawaiian Hotel, as well as the local bars and tattoo parlors. Finally, the day came to leave for the operation, and Corvina put out from Pearl Harbor on 4 November 1943 on her first war patrol. Her assignment was to interdict anticipated Japanese reinforcements or an attack against the invasion force by enemy warships. Corvina, Thresher (SS-200), Apogon (SS-308), Blackfish (SS-221), and Drum (SS-228) were to take up station in a patrol area south of Truk Island. After topping off her fuel tanks at Johnston Island on 6 November, she made way to her assigned patrol area.

Corvina’s assignment had been a dangerous one: She was to patrol as closely as possible to Truk to intercept any Japanese sorties endangering the forthcoming American invasion of the Gilberts. Corvina was never heard from again after departing Johnston Island, and messages assigning her to refit were never acknowledged. Lt. Cmdr. William Kinsella, Blackfish’s executive officer (XO), recalled receiving an Ultra message on 15 November 1943, warning of an enemy submarine in the area:

“We were south of Truk with Drum and Corvina when we got a Ultra stating that a Japanese submarine was coming through the area. We were supposed to rendezvous with Drum and Corvina. Just after sunset we got into position where this Japanese submarine was supposed to pop up and sure enough, just at sunset, while we were submerged, it surfaced just to the south of us, not more than 5,000 yards away. It was starting to get dark, and we really could not see through the periscope well enough to ascertain that it was a Japanese submarine. Remember that Drum and Corvina were in the vicinity we elected not to shoot…As it turned out, we later established contact with Drum and determined it was not him. It was Japanese. We never did see Corvina again…The Jap sub got her.”

After the major surface force operations in the Gilberts were finished, Corvina was directed by dispatch on 30 November 1943 to pass to command of Commander TF 72 in Brisbane, Australia, on 2 December 1943. This message was repeated three times on each of two successive nights, and an acknowledgement was ordered, but none received. She was considered to have passed over to TF 72 despite her failure to acknowledge, owing to past experience other submarines had in acknowledging directives due to enemy interference. Corvina was then directed to proceed to Tulagi and rendezvous with a surface escort, but she never appeared. Further transmissions to the missing submarine were repeatedly sent, but none of them received a reply. Since her original orders directed her to pass to command of TF 72 on 14 December 1943, and proceed to an eastern Australian port for refit and duty in Submarine Southwest Pacific (SubSoWestPac), and since she had not been seen until just after her departure from Johnston Island on 6 November, Corvina was reported as presumed lost on 23 December 1943. 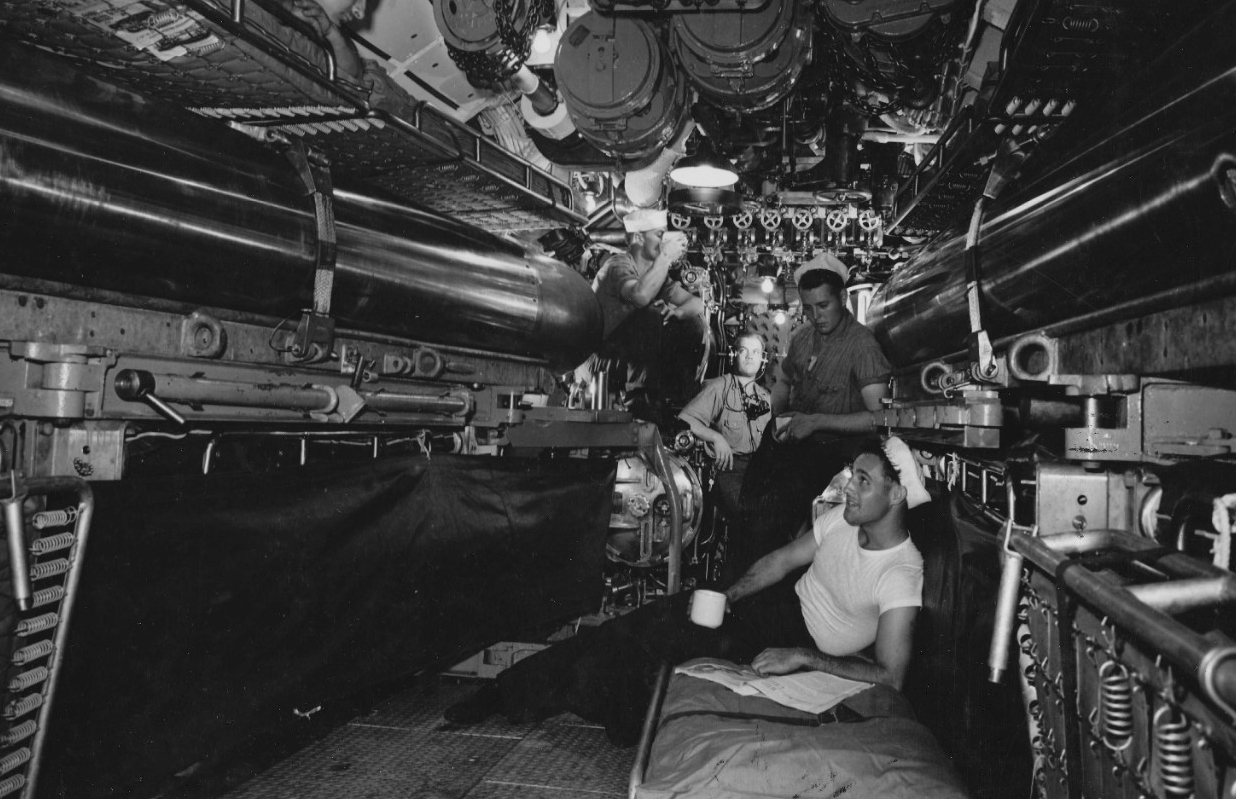 On 16 November 1943, Japanese submarine I-176, commanded by Lt. Cmdr. Yamaguchi Kozaburo, cruised at 16 knots approximately 300 miles south of Truk. At 2312, the lookouts on the partially flooded Japanese submarine sighted a dark object to the northeast of their position, 8,800 yards away, illuminated by the bright moonlight. Lt. Cmdr. Yamaguchi gave the order to prepare to dive and turned towards the target. Four minutes later, the American vessel was mistakenly identified as a “Perch-class” submarine, evidently in the process of recharging her batteries. I-176 crash-dived, ran silent, and by 0057 on 17 November 1943, reached a position off Corvina’s starboard quarter, a distance of 2,700 yards. Lt. Cmdr. Yamaguchi considered the firing angle excessive and ordered his ship to battle-surface in fifteen minutes. At 0112, Corvina suddenly turned towards I-176, and Yamaguchi belayed the order to surface and turned his ship in order to keep Corvina on his port beam. At 0120, I-176 fired three torpedoes from her bow tubes. Twenty-five seconds later, two heavy explosions were heard and I-176 was shaken considerably from the blast. Corvina sank to the bottom with all 82 hands lost. At 0130, Yamaguchi made a periscope search, and ordered his submarine to surface while headed for the site of the attack, where he found an oil slick and various debris. Convinced he destroyed the U.S. submarine, Yamaguchi set course for Truk, and arrived on 18 November 1943 to a hero’s welcome. The loss of Corvina was not announced until 14 March 1944; she was the only American submarine sunk by a Japanese boat in the entire war. 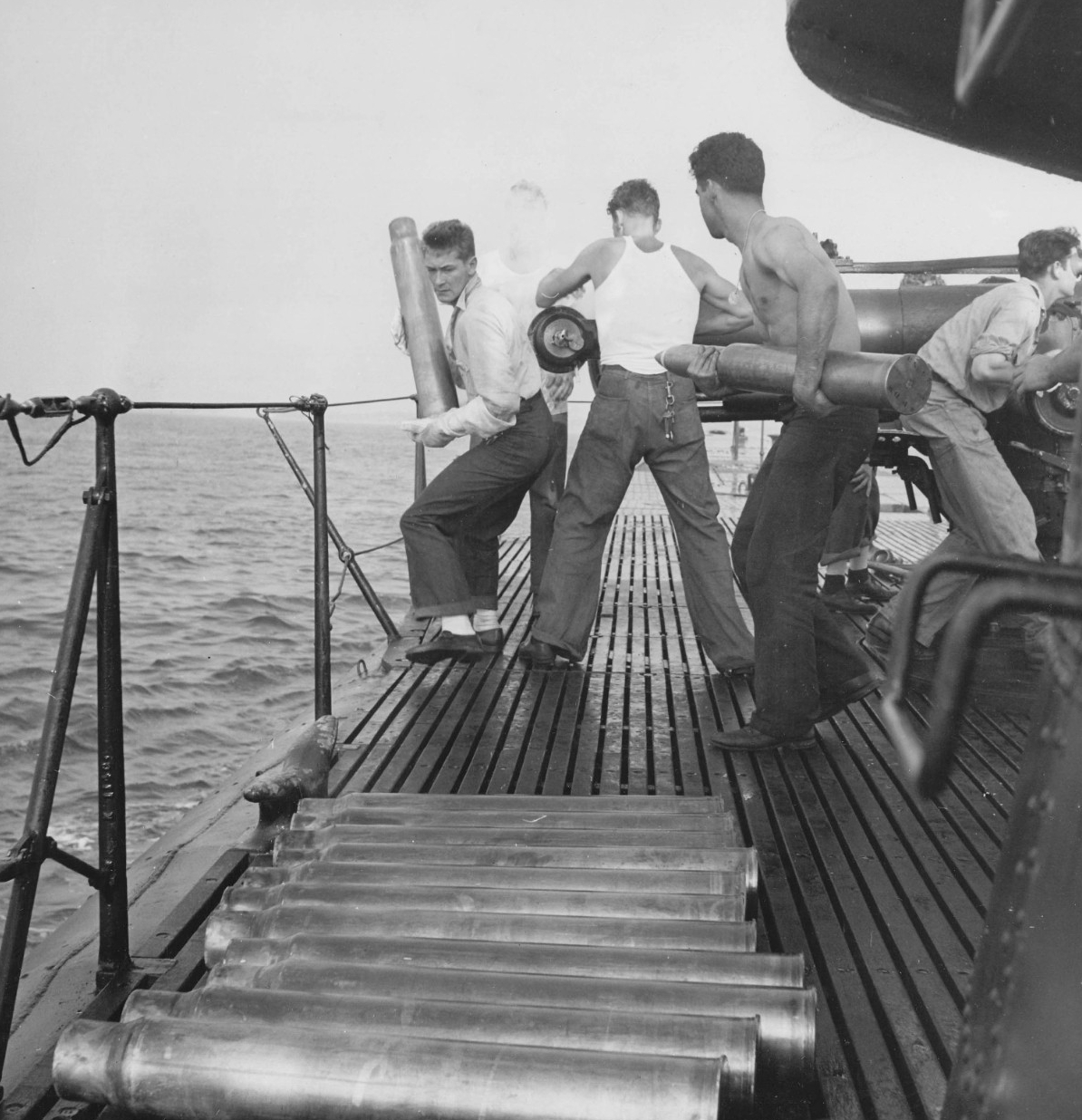 In 1946, captured Japanese naval records revealed the role of I-176 in Corvina’s demise. The records indicated that I-176, ordered to Truk in November 1943, had her directives intercepted by Ultra. Naval intelligence passed them on to Corvina, Drum, and Blackfin, warning them an enemy submarine was in their patrol areas. A message from I-176 was also intercepted, reporting she had “Received direct torpedo hit en route to Truk, no damage.” Presumably attacked by a U.S. submarine, Lt. Cmdr. Yamaguchi had managed to escape damage, most likely the result of a defective torpedo.

Just three days after Corvina’s sinking, on 19 November 1943, Sculpin (SS-191) was severely damaged during an underwater/surface engagement in the waters north of Truk. After forcing Sculpin to surface, the Japanese destroyer Yamagumo opened fire, striking the conning tower and killing both the commanding officer and his exec. After the surviving crew scuttled her, Yamagumo picked up 42 of Sculpin’s survivors. Retribution for the loss of Sculpin and Corvina was obtained at the Battle of Surigao Strait on 24–25 October 1944, when McDermut (DD-677) torpedoed and sank Yamagumo with all hands. Corvina was avenged when Franks (DD-554) attacked and sank I-176 (Yamagushi having been relieved on 1 February 1944 by Lt. Cmdr. Okada Hideo) near the Buka Passage on 17 May 1944. All 103 hands were lost. Yamaguchi went on to command I-46, and met his fate when she was sunk off Leyte on 28 October 1944, by a coordinated depth charge attack by Helm (DD-388) and Gridley (DD-380). All 112 Japanese sailors were presumed lost.

In popular culture, the loss of Corvina appears in the 1951 John Wayne film Operation Pacific. Wayne plays the skipper of the fictitious Gato-class sub USS Thunderfish. After Corvina experiences problems with her number four main engine, she rendezvous’ with Thunderfish to exchange engine parts. In return for the parts, Wayne’s character exchanges films with Corvina’s commanding officer, offering George Washington Slept Here, while Corvina’s skipper offers “a submarine picture,” later revealed to be Destination Tokyo. Later, while the Thunderfish crew watches Destination Tokyo, Wayne’s character is shown trying to discover the origins of torpedo explosions reported by his sonar operator. While running on the surface the following day, Thunderfish comes across strewn wreckage, and Wayne discovers the case containing George Washington Slept Here, revealing Corvina had been sunk. Suddenly, Thunderfish’s radar picks up a single contact, and Wayne orders the sub to dive. While looking through the periscope, he spies “one I-type Jap submarine.” Thunderfish torpedoes and destroys the enemy sub, avenging the loss of their shipmates on board Corvina.

Corvina was stricken from the Navy list on 25 March 1944.