James R. Caldwell – born on 1 November 1778 in Philadelphia, Pa. -- was appointed a midshipman on 22 May 1798 and commissioned a lieutenant on 1 November 1800. He served with distinction in the West Indies in the frigate United States, the schooner Experiment, and the armed ship Ganges during the Quasi-War with France, and in the frigate Constellation during the Barbary Wars against Tripoli. In mid-1803, he returned to the Mediterranean in the brig Siren to participate in further operations against that piratical North African state.

Caldwell distinguished himself in a boat action on 7 July 1804 and also took part in an attack on 3 August, which resulted in the capture of three vessels that were taken into the Navy as gunboats. One of these, Gunboat No. 9, was under Caldwell's command when the U.S. squadron again bombarded Tripoli on 7 August 1804. While briskly engaged with an enemy battery, Gunboat No. 9 blew up after a hot shot penetrated her magazine. Lt. Caldwell and eleven others were killed or mortally wounded in the explosion. 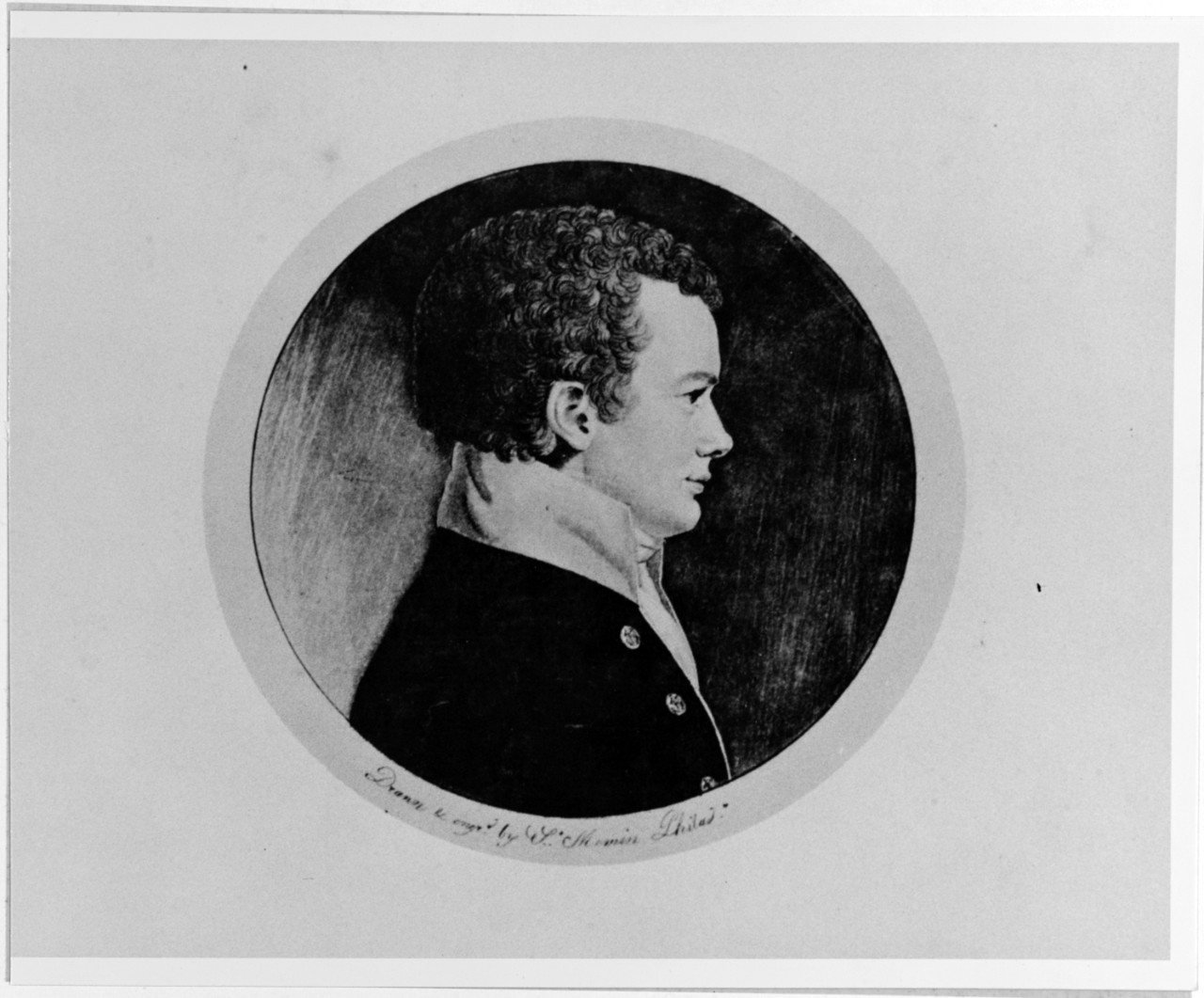 Caldwell (Destroyer No. 69) was laid down on 9 December 1916 at Vallejo, Calif., by the Mare Island Navy Yard; launched on 10 July 1917; and sponsored by Miss Charlotte Caldwell, great-great granddaughter of James R. Caldwell.

Commissioned on 1 December 1917, Lt. Cmdr. Byron McCandless in command, Caldwell received orders on 4 December to join the Atlantic Fleet. Consequently, the destroyer departed her building yard on 20 December, and, steaming via San Pedro and San Diego, Calif. (24 December), Salina Cruz, Mexico (28–29 December), she reached Balboa, Canal Zone (C.Z.) on 1 January 1918 and transited the Panama Canal the next day. Steaming through the Caribbean, she reached the Norfolk Navy Yard, Va., on 6 January 1918.

On 9 January 1918, Caldwell received orders to fit out for distant service. The next day, Adm. William S. Benson, Chief of Naval Operations, wired Vice Adm. William S. Sims, Commander, U.S. Naval Forces in European Waters to inform him that Texas (Battleship No. 35) was to be assigned to Battleship Division Nine (Battle Squadron Six), to be accompanied by Caldwell. The destroyer cleared Norfolk on 25 January. Bound for the New York Navy Yard, Brooklyn, N.Y., she arrived there the next day, where she fitted out for distant service. Undocking on 8 February, she went to sea to undergo trials, after which she returned to New York on 11 February.

Caption: Caldwell taking on fuel oil from the French four-masted barque Quevilley -- one of the world's few sailing tankers -- at Ponta Delgada, Azores, 27 February 1918. Note the depth charge projector (Y-gun) on the after deckhouse, with the after 4-inch gun located on the fantail, forward of the depth charge tracks, and that Caldwell appears to be painted in Mackay low visibility camouflage. Photographed from Margaret (S. P. 527) by Raymond D. Borden. (Naval History and Heritage Command Photograph NH 55003)

Departing the next day, she arrived at Queenstown, Ireland (Base No. 6), on 5 March 1918 and reported for duty to conduct antisubmarine patrols and convoy escort missions. Operating from both Queenstown and Berehaven, Ireland, Caldwell never encountered or engaged German U-boats during the war. She did, however, conduct tests of an antisubmarine listening device that was installed on board prior to her deployment. The equipment proved to be of inconsistent capability, however, and of insufficient value. She also went into the Cammel Laird Yard in Liverpool, England, for maintenance on 23 August 1918. She departed the yard on 5 September and steamed back to Queenstown for duty. On 23 September, Caldwell and Rowan (Destroyer No. 64) collided in the harbor at Queenstown resulting in the convening of a board of investigation on board Caldwell on the 25th. The collision caused her to have to return to Liverpool for repairs and refit. She arrived there on 27 September. She later arrived at Plymouth, England (Base No. 27) on 6 November. 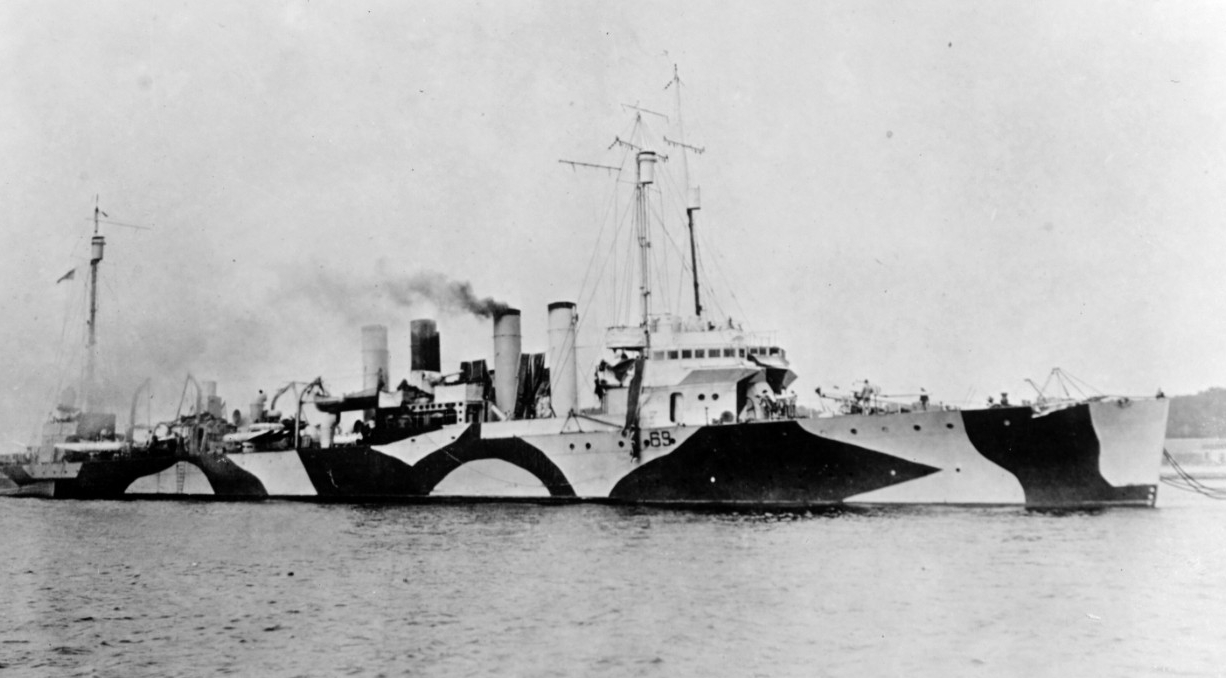 Caption: Caldwell alongside another destroyer, 1918, while painted in pattern camouflage, her identification number (69) painted beneath the bridge. Note crow’s nests at the fore- and mainmasts. (Naval History and Heritage Command Photograph NH 55001) 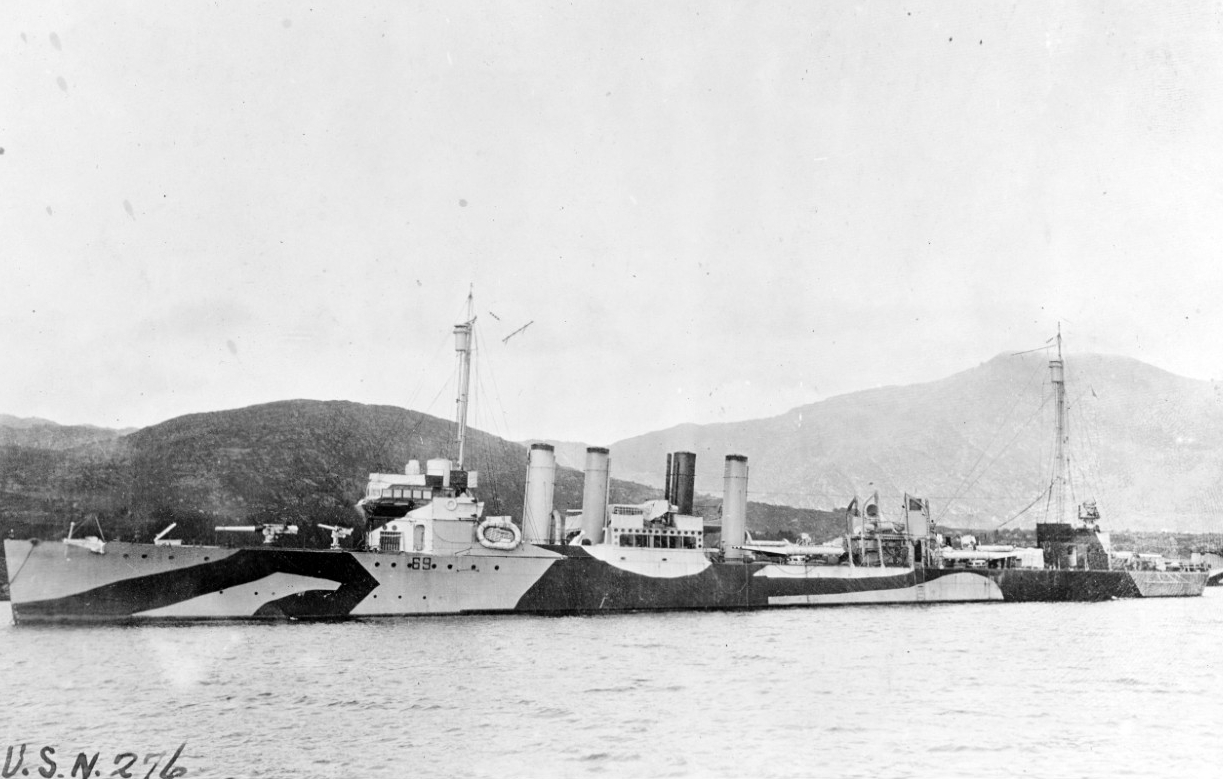 Caption: Caldwell moored in an unidentified harbor, 1918, painted in pattern camouflage. Note shields on the amidships ’4-inch mounts, but lack of a shield on the forward and aft mounts. (Naval History and Heritage Command Photograph NH 52854) 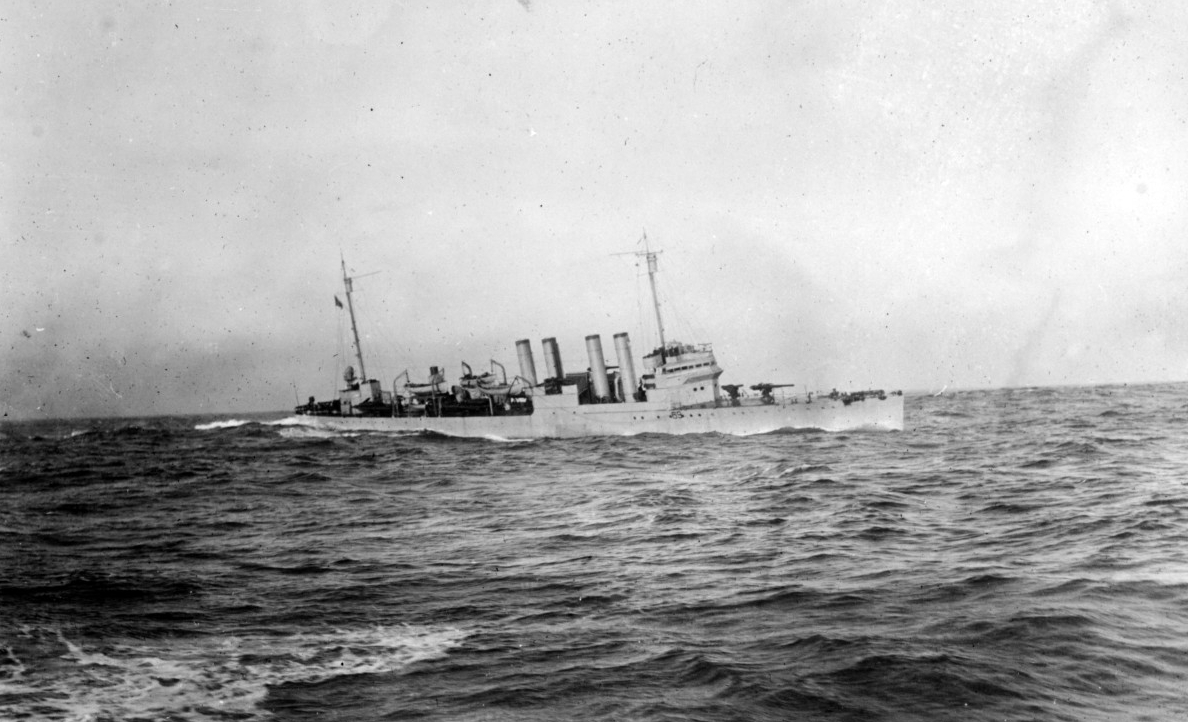 Caption: Caldwell underway off France, circa late 1918, in a solid color paint scheme, with her identification number still in its wartime position beneath the bridge. (Naval History and Heritage Command Photograph NH 55002)

With the Armistice of 11 November 1918 and the cessation of hostilities, Caldwell transported hospital patients to Brest, France (Base No. 7), where she arrived on 21 November, she departed for Queenstown on the 23rd, but returned to join the escort for President Woodrow Wilson in George Washington (Id. No. 3018) as she entered Brest harbor on 6 December. The destroyer returned to Queenstown on 12 December, and four days later sailed for the United States. Touching at the Azores (20–23 December), she resumed her transit and stood into Norfolk on 1 January 1919.

Ordered to New York on 17 January 1919, Caldwell cleared Norfolk on 19 January and entered the New York Navy Yard for a period of general overhaul on 20 January 1919. She remained at the New York Navy Yard until 6 October when she got underway and went to sea. Assigned to Destroyer Squadron 3, Norfolk Division, Destroyer Force, Atlantic Fleet, she arrived at Hampton Roads, Va., on 15 October. The next day she conducted two runs to test her director firing capability. Caldwell then departed on 20 October, and operated off the east coast and Gulf coast with port visits to Key West, Fla. (22–23 October), Pensacola, Fla. (24 October-6 November; 2-13 December), Galveston, Texas (26 November–1 December). She arrived back in Norfolk on 17 December where she remained through the new year. Getting underway on 8 January 1920, she stood in to the New York Navy Yard, the next day.

Caldwell departed the New York Navy Yard on 13 August 1920 and arrived at the Philadelphia (Pa.) Navy Yard the next day. Placed in reserve commission, she operated with a reduced complement when she got underway again on 16 December en route to Charleston (S.C.) Navy Yard, via Hampton Roads (17–18 December) and arrived on 19 December and remained there through the winter.

Caldwell got underway again on 25 March 1921 and visited Jacksonville, Fla. (26–28 March) before returning to Charleston on the 29th. She then departed Charleston on 10 May and steamed to New York. Arriving on 12 May, she remained there until 31 May, when she steamed to Newport, R.I. and arrived later that day. Through the summer months, the destroyer operated along the New England coast from Newport. In the fall, she headed south to operate from Charleston along the southeast coast of the U.S. until 20 November when she stood into Charleston where she remained well into 1922.

Designated for decommissioning, Caldwell cleared Charleston on 24 March 1922 and after a brief time at Hampton Roads (25–28 March), stood in to the Philadelphia Navy Yard on 29 March, where she was decommissioned on 27 June 1922.

Caldwell was stricken from the Navy list on 7 January 1936. Sold to the Northern Metal Company, Inc., Philadelphia, on 30 June, she was scrapped by her purchaser on 12 August in accordance with the terms of the London Treaty on the Reduction of Naval Armament.