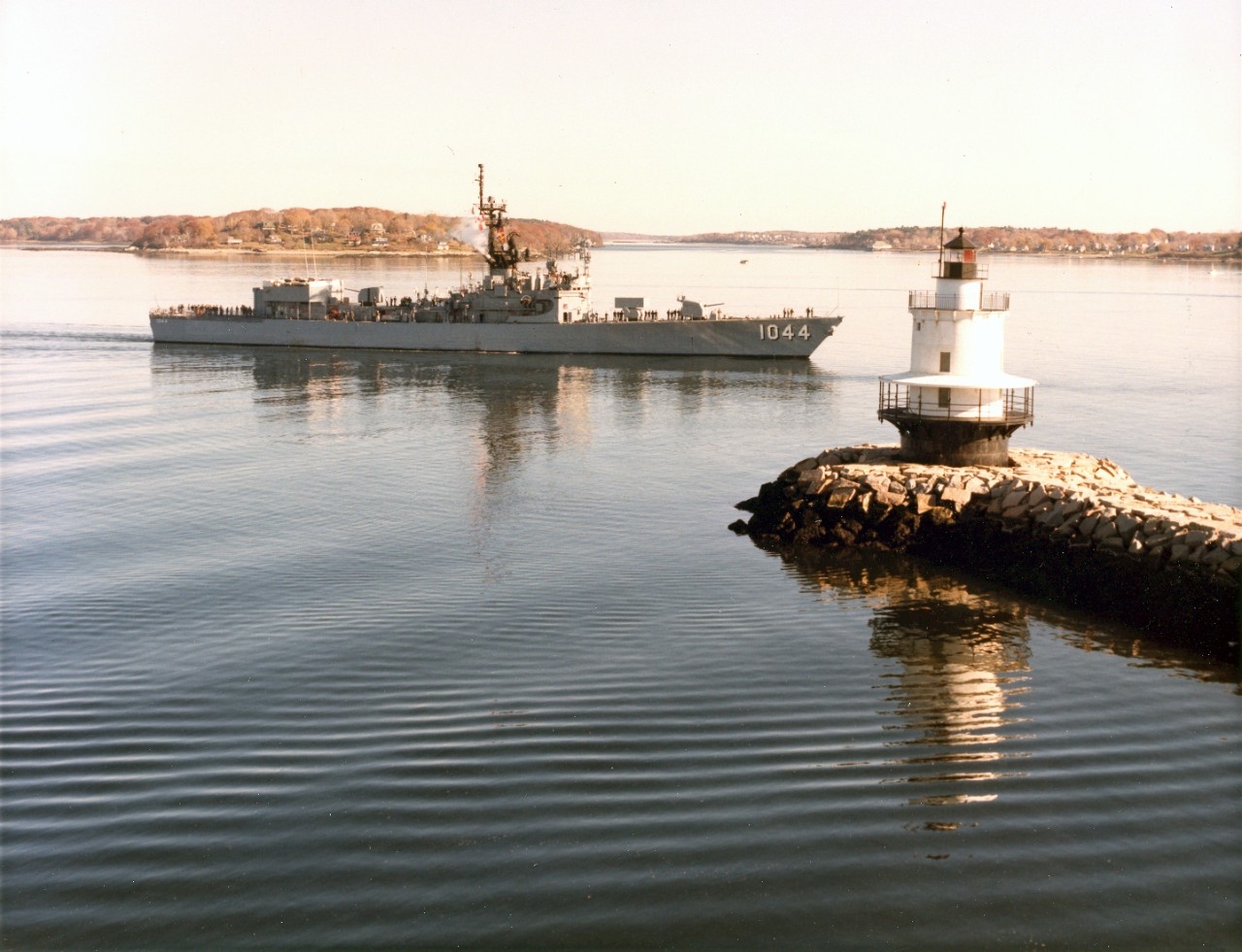 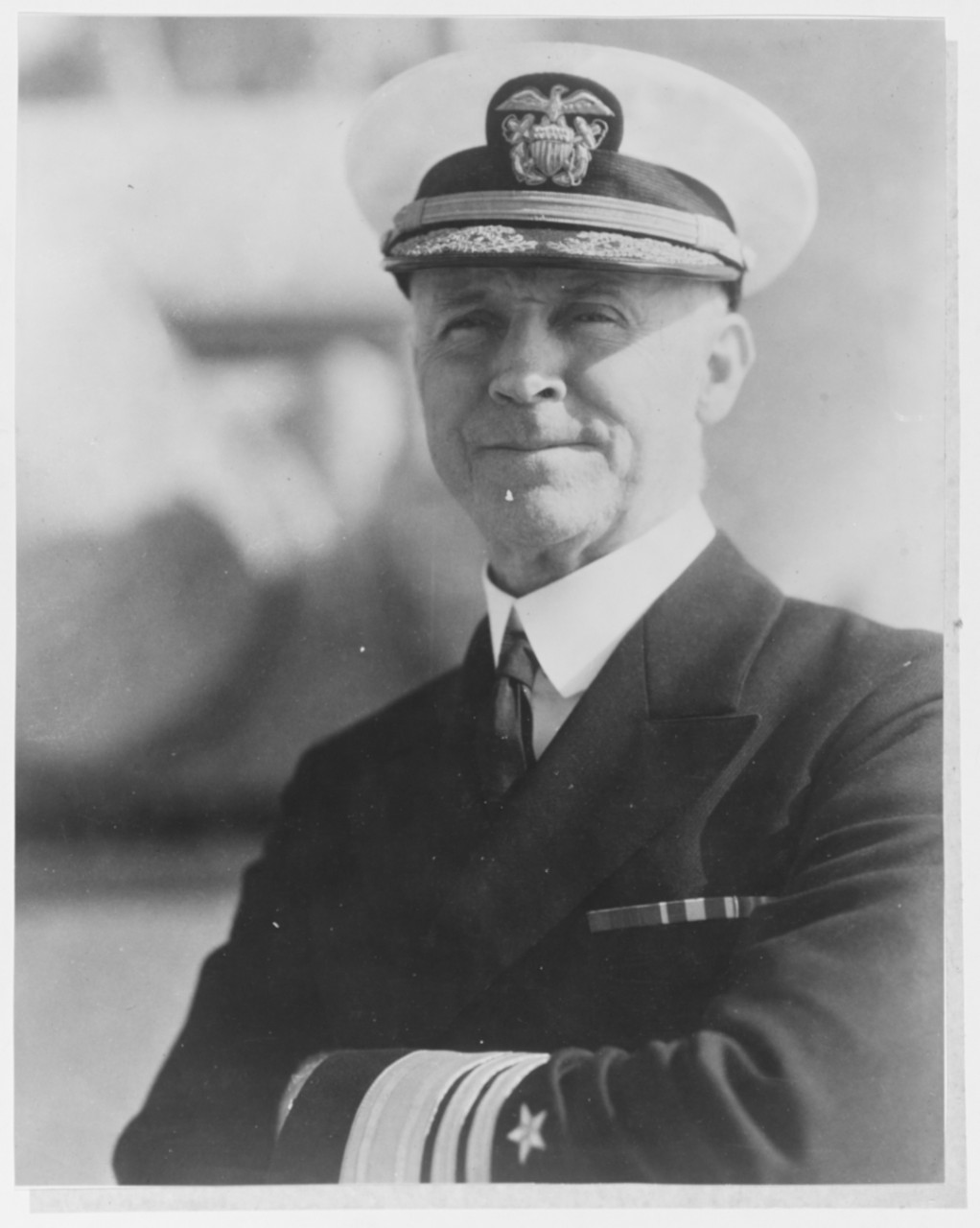 During Brumby’s Caribbean shakedown training in 1966, she assisted in efforts to save cruise ship MS Viking Princess by searching for survivors after the ship caught fire. Of the 484 passengers on board, all were rescued except two that died of apparent heart attacks. Arriving back at her homeport at Newport, R.I., Brumby made her first deployment to the North Atlantic and Mediterranean (May-September 1967). She also received the Battle “E” award for 1966.

Transferred to Destroyer Squadron (DesRon) 12 in 1968, Brumby steamed to her new homeport at Mayport, Fl., in 1969. Her second deployment to the Mediterranean occurred from May-September. After a brief refit, Brumby conducted workups before steaming to the Mediterranean in November 1970, returning to Mayport in May 1971.

In mid-1972, Brumby participated in Exercise STRONG EXPRESS in the North Atlantic. Suffering damage to her steam generators in October, Brumby was towed for a month-long trans-Atlantic journey from Greenock, Scotland, to Charleston, S.C., by Preserver (ARS-8), arriving on 15 November 1972. Brumby immediately went into the shipyard for repairs to her generators.

By 1973, she became an element of DesRon 4 and moved her homeport to Charleston, S.C. As a unit of the Middle East Force, Brumby deployed to the Indian Ocean. Making a visit to Karachi, Pakistan, she returned in 1974.

Brumby participated in SOLID SHIELD 75 and UNITAS XVI in 1975. She was re-designated a frigate on 30 June. In 1976, Secretary of the Navy J. William Middendorf III presented her with the “Golden Snipe” award. She also took part in the North Atlantic exercise TEAMWORK 76 and Exercise BONDED ITEM.

From 1 February 1977-14 April 1978, Brumby underwent the first of three regular overhauls conducted by Bath Iron Works, Corp. The overhaul focused mainly on the engineering plant. She later deployed to the Mediterranean in 1978. While underway, she steamed alongside her squadron in SHAREM 30 and Exercise “National Week.”

Brumby deployed on 22 February 1980, enjoying her first Middle Eastern liberty port upon visiting Bahrain (16-18 April). After Brumby’s second overhaul period (March-December 1981) at Bath Iron Works, the frigate returned to Charleston on New Year’s Day. On 25 January 1982, Brumby’s Rescue and Assistance Team, along with teams from John Rodgers (DD-983), Sierra (AD-18), and Thorn (DD-988), fought a Class Bravo fire in the fireroom of the U.S. Army Corps of Engineers dredge McFarland, anchored in Charleston harbor. Brumby later received a Coast Guard Unit commendation for helping extinguish the blaze and preventing an oil spill in the harbor. On 11 October, Brumby collided with Mullinnix (DD-944) while participating in the War-at-Sea phase of READEX 1-83. No personnel injuries occurred and damage to both ships was minor. 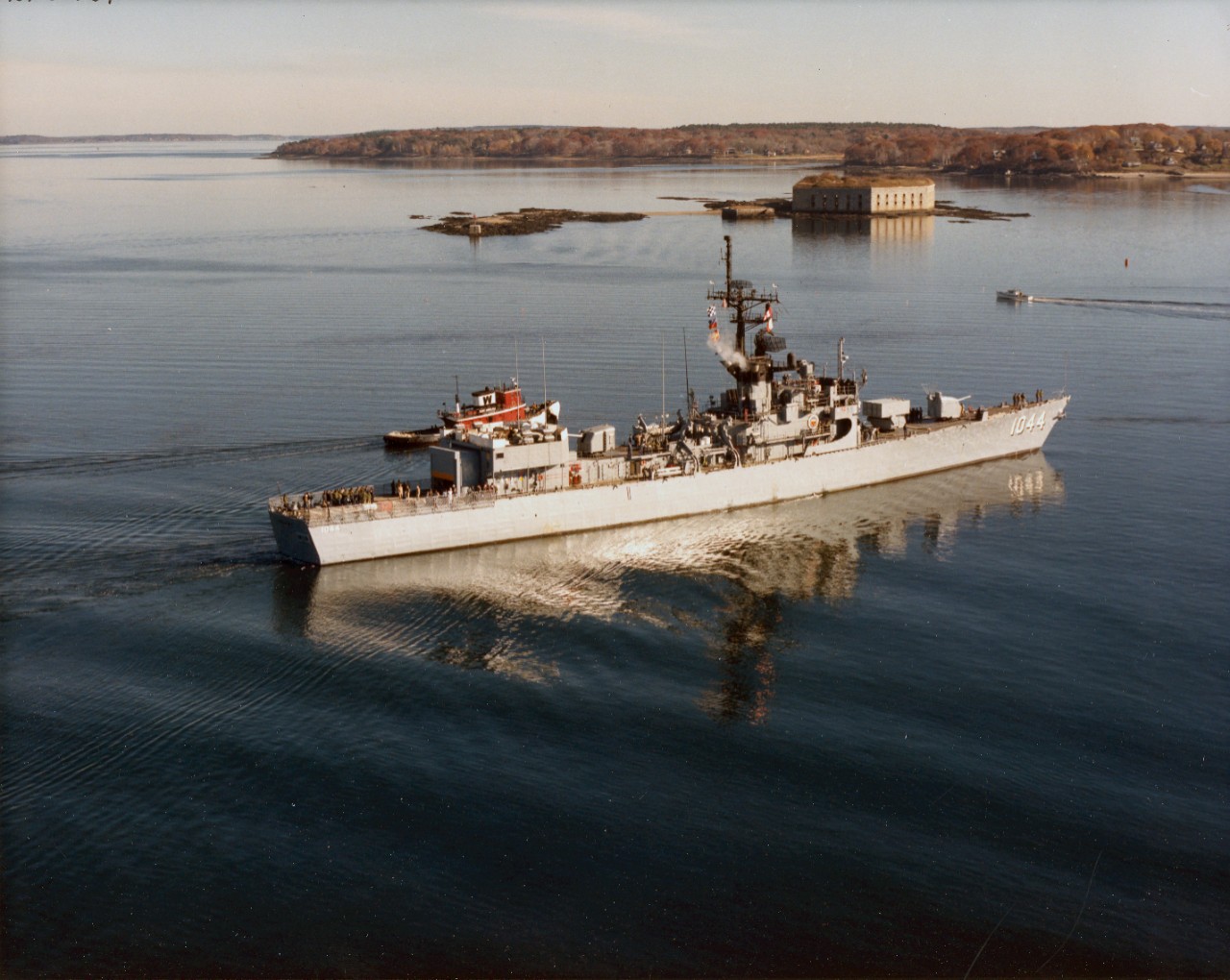 Providing support to U.S. Marines ashore in Beirut throughout much of 1983, Brumby suffered structural damage to her starboard side on 27 January, necessitating major repairs. After spending the next 45 days in a shipyard in Naples, she returned to her station off Beirut for six more weeks. While training off Cuba in June, a serious casualty to one of her two main boilers caused Brumby to steam to Charleston for repairs before completing training while underway again for Cuba.

On 10 October 1985, Brumby entered Ancona, Italy, to represent the United States in Naval On-Call Force Mediterranean XXIX with ships from the navies of Greece, Italy, Turkey, and the United Kingdom. Beginning on 3 May 1985, the frigate participated in SOLID SHIELD 85, before taking up duties as antisubmarine (ASW) escort for Saratoga (CVA-60). She later served as flagship for Commander, Destroyer Squadron (ComDesRon) 22 in ASW patrols in the Atlantic.

In the first three weeks of January 1987, Brumby participated in counter-narcotics operations in the Caribbean. She participated in SOLID SHIELD 87 (22 April), until receiving a search and rescue tasking to assist tug Guardian, en route from New Orleans to New York. Caught in a storm off Cape Hatteras, Guardian took on water over her stern and began to founder. Brumby steamed to Guardian’s assistance and remained with the sinking vessel all evening until a rescue the next day saved all five crewmembers. In August, she entered the Bath Iron Works to commence a regularly scheduled overhaul.

From January-March 1989, Brumby prepared to decommission before transferring to the Pakistan Navy under the Foreign Military Sales Program. The Pakistani crew arrived in Charleston the first week of February and underwent intensive training by Brumby crewmembers in port and at sea.

Brumby decommissioned on 31 March 1988, before transferring to the Pakistan Navy and recommissioned as PNS Harbah.

Returned to the United States, she was stricken from the Navy Register on 9 September 1994. 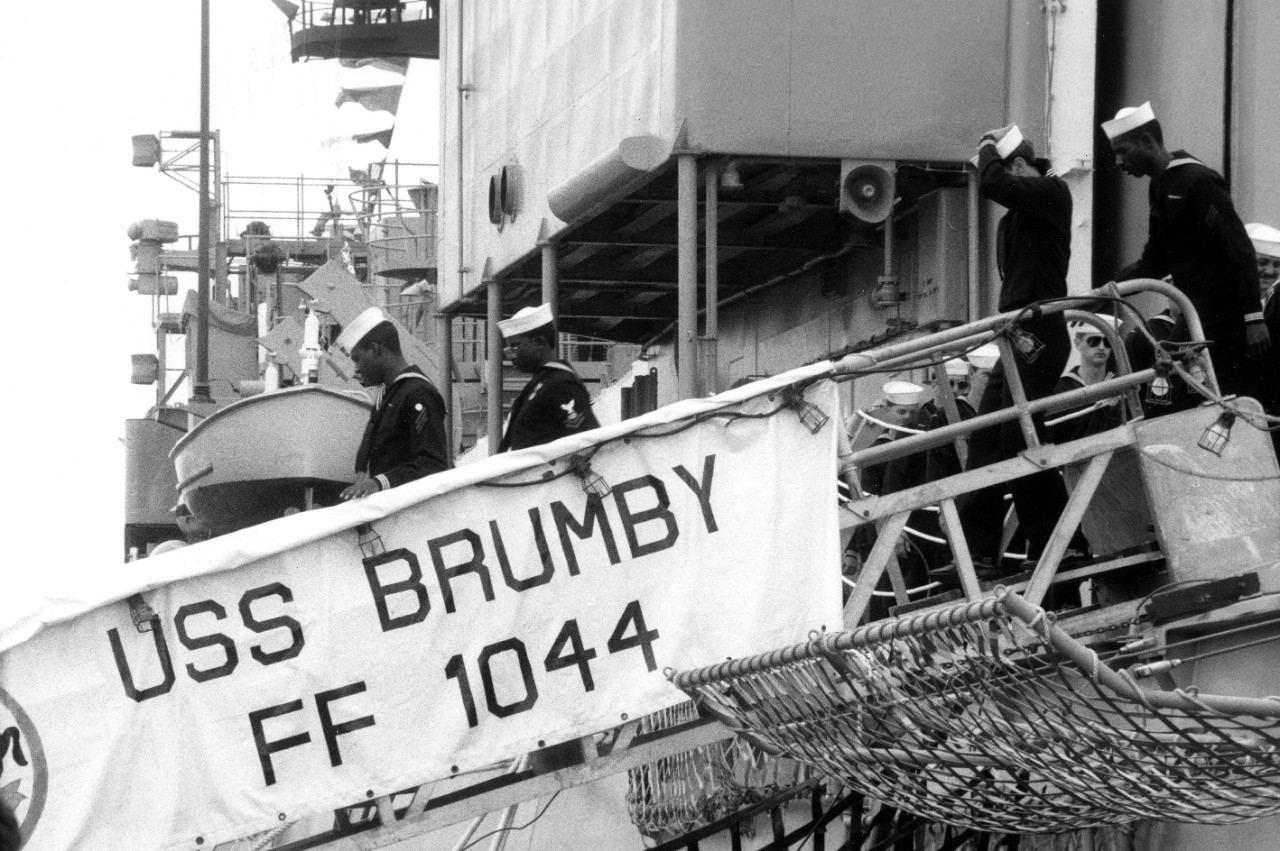