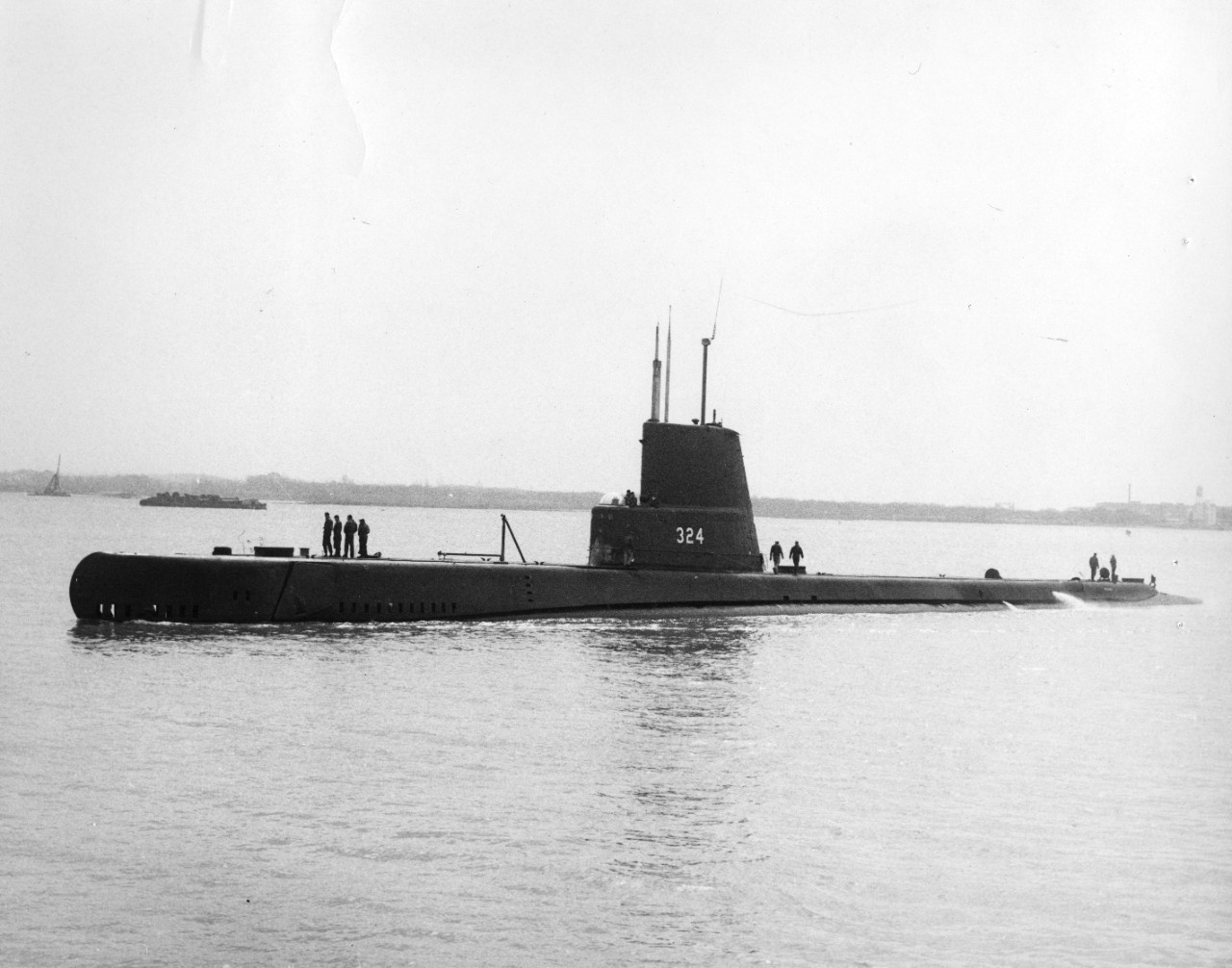 Any of numerous small, elongated, and often scaleless fishes living along rocky shores.

Following training at New London and at Newport, R.I., Blenny got underway for Key West, Fla., on 29 August 1944. She arrived at her destination on 5 September and trained at the Fleet Sound School located there. From there, she headed for the Panama Canal, transiting it on the 19th, and departed Balboa on 28 September. Reaching Pearl Harbor on 15 October, the boat began preparations for her first war patrol.

On 10 November 1944, Blenny stood out of Pearl, bound for the coast of Luzon. After fueling at Saipan on 22 November, the boat departed for her assigned patrol area the next day. On 1 December, she fired a single torpedo at a Japanese escort vessel but missed. The enemy retaliated with a severe, but unsuccessful, depth-charge attack. Five days later, the submarine escaped unscathed from another close call when a low-flying enemy plane dropped two bombs that near-missed Blenny. That same day, however, 14 December, the submarine claimed her first two successes.

In the morning, she made a surface gun attack on a 300-ton sea truck and sank it. Late that night, the submarine sank the 800-ton Coast Defense Vessel No. 28 with torpedoes in a surface attack. On the 23d, Blenny claimed to have torpedoed and sank a 10,000 ton transport which, after the war was identified as the 4,156 ton cargoman, Kenzui Maru. Her parting shot of that patrol came on the 27th when she fired torpedoes at an unidentified freighter and claimed to have damaged her. Japanese records, however, do not substantiate the claim. Blenny set course for Fremantle, Australia on 31 December 1944 and arrived there on 13 January 1945 to begin refit.

Blenny embarked upon her second war patrol on 5 February 1945. This time her patrol area was located off the coast of Indochina. On 20 February, she made an unsuccessful submerged attack on a convoy escorted by two destroyers. The attack did not succeed, though, and the submarine suffered through a series of depth-charge attacks from the convoy's escorts. Those, however, also proved unsuccessful; Japanese antisubmarine tactics throughout the war verged on the ludicrous. On the night of 26 February, she encountered the 10,238-ton tanker Amato Maru and sank her with a spread of torpedoes. Though she also claimed to have damaged two similar ships, a postwar check of Japanese records falled to corroborate that claim. Two days later, the submarine received orders to put into Subic Bay to reload torpedoes and arrived there on 2 March. She returned to her patrol area on the 4th. After 16 days on patrol, she had her most successful day of the war on 20 March when she sank three enemy ships in one 24-hour period; the 500-ton cargoman Yamakuni Maru, the 834-ton No. 21 Nanahin Maru, and the 1,039-ton cargo ship Hosen Maru. After receiving two rescued aircrewmen from Blueback (SS-326) on 25 March, she set a course for Subic Bay and a refit.

She completed that in-port period on 16 Apri1 1945 and put to sea for a patrol off Indochina and in the Java Sea. Her tour off the Indochinese coast came as a result of the need for lifeguard submarines to be on station to rescue ditched Army aircrews. She sighted no targets during that phase of the cruise and returned to Subic Bay on 16 May to take on additional fuel. On the 18th, Blenny returned to sea and shaped a course for the Java Sea. On 25 May, she encountered a small subchaser close inshore. Her approach had to be made in relatively shallow water; therefore, Blenny flooded down and backed awash toward the shore and her target while a sailor on the fantail took depth soundings with a lead line. She fired torpedoes from her stern tubes and claimed to have sunk the subchaser. However, since she estimated the enemy warship to be of only 170 tons displacement and the postwar survey counted only vessels of 500 tons or more, that claim is impossible to verify. Be that as it may, the submarine scored a corroborated kill five days later when, after sinking a small lugger with gunfire, she encountered the 520-ton cargoman Hokoku Maru and sank her in a daylight attack. On 5 June, Blenny departed the Java area and set a course for Fremantle, Australia. She arrived at her destination four days later and commenced refit in preparation for her fourth and final patrol of the war.

Blenny embarked upon her final war patrol on 5 July 1945. Departing Fremantle, she shaped a course for her patrol area in the Java Sea and north from there to the eastern coast of Malaya. Although her entire bag for the patrol consisted of small fry, she got an impressive number of them. She started out on 11 July by sinking a sea truck by gunfire. Five days later, she attacked a converted gunboat and claimed to have sunk it with torpedoes, though postwar accountings do not verify the sinking. She then engaged the small vesse1 that had been steaming in company with the gunboat, but her gunfire failed to damage her much because of extreme range and Blenny's inability to close. For the remainder of the patrol, she encountered only sampans, junks, and the like, sinking many after ascertaining their nationality and seeing to the safety of their crews. On 3 August, the submarine rescued a boarding party from a sampan which Cod (SS-224) had been forced to abandon upon the approach of an enemy plane two days previously. On the 7th, she had her own brief scrape with Japanese air power when a plane dropped a small bomb. He missed, and Blenny dove to evade. Four days later, she left her patrol area and shaped a course for Subic Bay.

Blenny arrived in Subic Bay on 14 August 1945, the day before hostilities ceased. The submarine completed refit and departed Subic Bay on 31 August. She arrived at Guam on 5 September and hegan a series of training exercises. She remained in the Marianas until 12 January 1946 when she got underway for the United States. The warship made a two day stop at Pearl Harbor before arriving in San Diego on the 30th. She stayed there for two months before shifting to San Francisco on 30 March. During the summer, she operated along the west coast. On 2 August, the submarine departed San Diego and headed, via Pearl Harbor, for the Far East. She arrived at Subic Bay late in the month and remained there until 2 September at which time she got underway for Tsingtao. Blenny served in Chinese waters, at Tstngtao and Shanghai, until late October. After operations in Japanese waters which lasted until 3 November, she set a course home.

She returned to San Diego late in the month and remained there until mid-February 1947. On the 17th, Blenny stood out of San Diego, bound for Pearl Harbor. She arrived in Oahu on 10 March and stayed until the 18th when she headed back to San Diego. She arrived at her destination on 8 April and operated along the California coast through the end of July. On the 30 July, the submarine stood out of San Diego on a reserve training cruise to the Pacific Northwest during which she visited ports in Washington and British Columbia. She resumed operations along the California coast late in August. That employment continued, with periodic cruises to the Pacific Northwest, until early July 1950. During that month, she made a round-trip voyage to Pearl Harbor and back to San Diego, returning to her home port early in August. She resumed west coast operations once more and continued so employed into the spring of 1952.

On 30 April 1952, she got underway, via Pearl Harbor, for the Far East. Blenny arrived in Yokosuka, Japan, on 24 May. While in the Far East, the submarine conducted routine Seventh Fleet operations and made a 35-day reconnaissance war patrol in the Korean war zone. She departed Yokosuka to return home on 18 October. Sailing via Chichi Jima in the Volcano Islands and Pearl Harbor, she arrived back in San Diego early in November. She conducted west coast operations until reassigned to the Atlantic Fleet in the spring of 1954. On 11 May, she stood out of San Diego and shaped a course for the Panama Canal. She transited the isthmian waterway on 24 May and headed for New London, where she reported on 9 June.

Blenny remained active for another decade and a half. Throughout the remainder of her career, the submarine operated from the New London base. Initially, her operations took her as far south as the British West Indies and as far north as the coast of Newfoundland. Her primary mission was the development of attack submarine tactics and of antisubmarine warfare tactics. However, she also test-fired new types of torpedoes. That routine continued until the early 1960's when she began making periodic deployments to the Mediterranean for duty with the Sixth Fleet. Blenny alternated between tours of duty with the Sixth Fleet and extended assignments in the western Atlantic where she conducted test and evaluation operations and took part in antisubmarine training.

Sometime in 1969, she was redesignated an auxiliary submarine, AGSS-324; and, in September, she was placed in commission, in reserve. Two months later, Blenny went out of commission for good, and she was berthed initially at Philadelphia. Her name was stricken from the Naval Vessel Register on 15 August 1973.

Subsequently moved to Portsmouth, Va., she remained there until 3 July 1979 at which time she was moved to the naval station at Norfolk. In 1984, it was planned to use the submarine for an exercise target, but that apparently never happened. Instead, in 1987, a decision was made to donate her to the State of Maryland for use as an artificial reef. 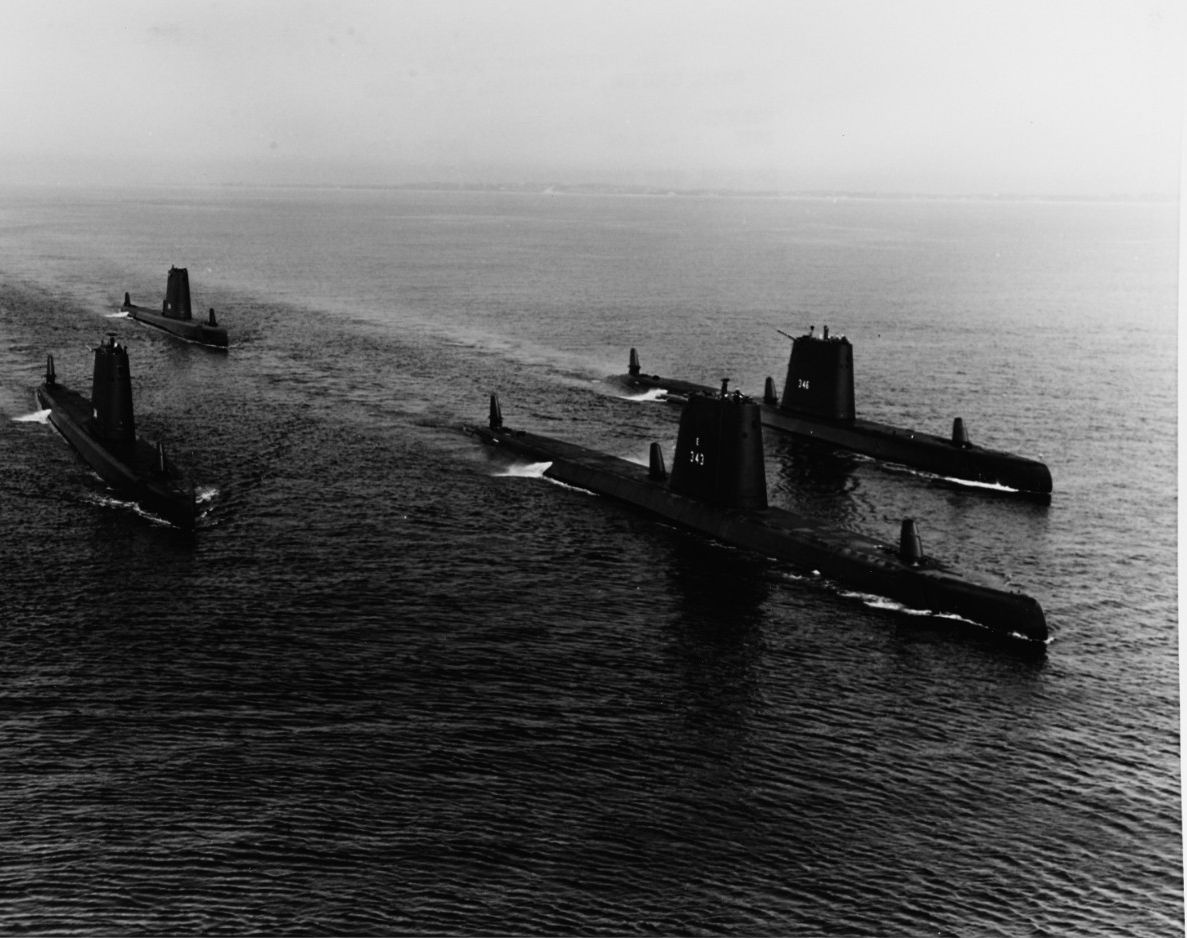