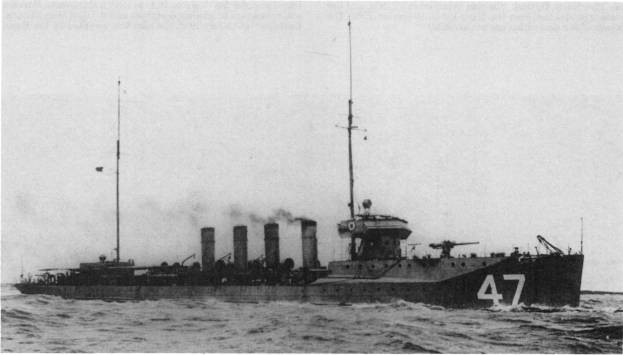 Caption: Aylwin (Torpedo Boat Destroyer No. 47), circa 1916, lead ship of her class, reflecting the point to which the modern destroyer had evolved just before World War I. (NH 77908)

John Cushing Aylwin, born in Quebec, Canada, on 14 June 1778, worked on board British naval vessels at an early age. Though never formally enrolled in the Royal Navy, he received increasing responsibilities eventually performing the duties of a mate by 1795. He refused the offer of a midshipman's warrant but continued service at sea, apparently against his will, for another six years. Ill health, however, finally brought about his return home. Then, for several years, he commanded merchant ships out of Boston. When war between the United States and Great Britain broke out in 1812, Aylwin received an appointment as a lieutenant in the Navy and became sailing master in Constitution. He received commendations for his gallantry during that frigate's engagement with HMS Guerriere on 19 August 1812. Lt. Aylwin took part in the battle between Constitution and HMS Java on 29 December 1812. Severely wounded during that encounter, Aylwin later died at sea.

The second Aylwin (Destroyer No. 47) was laid down on 7 March 1912 at Philadelphia by William Cramp & Sons Shipbuilding Co.; launched on 23 November 1912; sponsored by Mrs. Joseph Wright Powell; and commissioned on 17 January 1914, Lt. Comdr. Leigh C. Palmer in command.

Following a short cruise to Cuba, the destroyer was placed out of commission at the Norfolk Navy Yard and remained inactive for more than a year. She was recommissioned on 25 May 1915 and assigned to the 6th Division, Torpedo Flotilla, Atlantic Fleet. The ship then cruised along the east coast carrying out routine patrols.

During the early months of 1917, Aylwin sailed to Cuban waters for winter maneuvers and returned to the Virginia capes area upon America's entry into World War I. From June 1917 to January 1918, the destroyer participated in special experimental work while operating out of Boston, Mass., and Newport, R.I.

On 4 January 1918, Aylwin sailed for Queenstown, Ireland; and, shortly after her arrival there, began patrolling out of that port. However, shortly thereafter, she was detached to join British forces operating from Portsmouth and Devonport, England, in conducting antisubmarine patrols.

Aylwin remained in European waters following the end of the war. On 26 December 1918, she sailed in company with Chester (Cruiser No. 1) for an inspection tour of the Baltic ports of Germany. The ships, which, were operating under the auspices of the Allied Naval Armistice Commission, were to remove any American prisoners of war or citizens discovered in the German ports. On 16 June 1919, Aylwin departed Brest, France, bound for the United States, and arrived at New York City 10 days later. She then proceeded to the Philadelphia Navy Yard where she was placed in reserve.

While in this status, Aylwin received the designation DD-47 on 17 July 1920. She was decommissioned on 23 February 1921. The ships name was cancelled on 1 July 1933 so that a new destroyer, DD-355, might be called Aylwin. Thereafter, the older destroyer was referred to simply as DD-47. Her name was struck from the Navy list on 8 March 1935, and she was sold for scrap in accordance with the terms of the London Treaty for the limitation of naval armament.