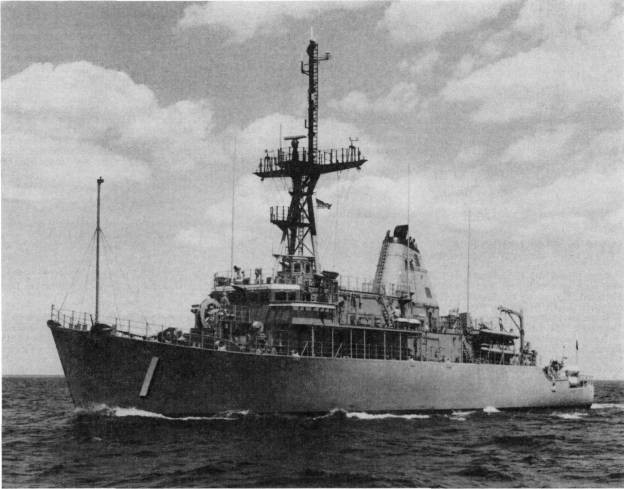 To inflict a punishment or penalty in return for; revenge. To take vengeance on behalf of.

Page 39 in Volume I, Series II, of the Official Records of the Confederate Navies in the War of the Rebellion contains a spurious entry for a bark named Avenger. The ship listed there as Avenger was in reality bark Arthur (q.v.). 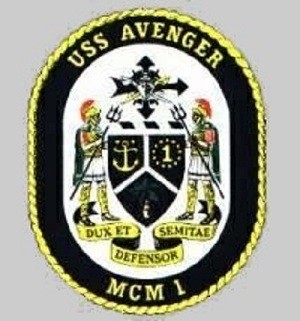 The blue and gold colors of the crest signify the traditional colors of the Navy. The centerpiece is divided into three quadrants separated by an inverted “Y”, which is symbolic of safe passage in a channel cleared of mines. The upper left quadrant consists of two stars over anchor honoring the two previous U.S. Navy ships to bear the name Avenger. The upper right section contains the ship’s hull number and thirteen stars, one for each of the additional ships of the class.

The lower section contains the Palmetto palm tree, symbolic of the state of South Carolina, Avenger’s first home port. Above the center crest is the surface warfare logo superimposed over a Mark VI mine. The centurions on either side represent the willingness of Avenger and her sister ships to stand guard over the waters where free men ply their trade. The Latin motto “Dux et Defensor Semitae” translates to Guide & Defender of the Pathway.

Avenger arrived at her original home port of Charleston, S.C., prior to her commissioning and a period of tests and trials. The Iraqis invaded Kuwait on 2 August 1990, and the coalition responded with Operations Desert Shield/Desert Storm/Desert Sabre. Avenger steamed to Virginian waters, where Dutch heavy lift ship Super Servant 3 pulled Avenger into place onto her submerged deck beside minesweeper Leader (MSO-490), along the starboard side of aircraft carrier Enterprise (CVN-65), undergoing a nuclear reactor refueling and overhaul at Newport News Shipbuilding, Va. Super Servant 3 sailed with four mine warfare ships to the Persian Gulf on 16 August. While deployed to the war, Avenger located and neutralized bottom mines. Her crewmen proudly painted symbols of the mines she defeated onto her port and starboard bridge wings, and the ship received the Navy Unit Commendation with Combat Action Ribbon.

Avenger shifted her home port to Ingleside, Texas, in 1993. She deployed to the eastern Atlantic in 1993 and 1995, the Mediterranean in 1997 and 1999, and the eastern Pacific via the Panama Canal for join operations on the west coast in 2001. Later that year, she tested a jam resistant electronic navigational system. Avenger took part in a Rim of the Pacific exercise in 2004, and completed a modernization in 2008, and then deployed to the western Pacific in 2010. She shifted to her forward deployed port of Sasebo, Japan, upon completing her six month deployment in December 2010. Avenger was decommissioned on 30 September 2014 at San Diego, Calif.