The third U.S. Navy ship named for a constellation located between Pisces and Taurus and depicted as a ram. In Greek mythology, Aries was a ram with golden fleece given by Hermes to Nephele, the abandoned wife of a King of Thessaly, so that she might save her two children from the wrath of Ino, their stepmother. With Nephele’s daughter, Helle, and her son, Phryxus, on his back, Aries flew into the air and headed toward the kingdom of Colchis on the eastern shore of the Black Sea. While the ram was passing over the strait separating Europe from Asia, Helle fell into the water below and drowned. Thereafter in ancient times, the strait was known as the Hellespont; and it is now called the Dardanelles.

With Phryxus still on board, Aries continued his flight eastward. When he was finally safe at Colchis, Phryxus slew Aries as a sacrifice to Jupiter. The ram’s golden fleece was then placed in a sacred grove guarded by a sleepless dragon.

Word of Aries’ fate reached Thessaly and ultimately prompted Jason's expedition in quest of the golden fleece. Accordingly, the young hero engaged the master shipbuilder, Argos, to construct a vessel suitable for the voyage. Named Argo after its builder, the resulting ship carried Jason and his companions, the Argonauts, on one of the most adventurous and best known journeys of ancient times, rivaling the excitement of Odysseus’ prolonged struggle to return to Ithaca and the suspense of Noah’s 40 days in the Ark. Indeed, some students of early literature have concluded from the similarity of the names of the two ships and from parallel incidents in their stories, that the Argo's, saga was inspired by Genesis' account of the Ark.

The third Aries (PHM-5) was laid down on 7 January 1980 at Seattle [Renton], Wash., by Boeing Marine Systems; launched on 5 November 1981; sponsored by Mrs. Earl B. Fowler, the wife of Vice Admiral Earl B .Fowler, Commander, Naval Sea Systems Command; and was commissioned at the Puget Sound Naval Shipyard, Bremerton, Wash., on 18 September 1982, Lt. Cmdr. Carl E. Weiscopf in command.

Aries operated in Puget Sound until 23 November 1982 when she got underway for Key West, Fla., her assigned home port. She made calls at San Francisco and San Diego on her way down the California coast. The guided-missile hydrofoil gunboat transited the Panama Canal on 11 December and arrived in Key West on the 15th. After the holidays, the warship began operations from her base.

Acceptance trials came late in January 1983, and, in February, she carried out her first law enforcement operation against drug smugglers in cooperation with the U.S. Coast Guard. March and April brought training duty out of Key West and two more missions assisting in Coast Guard efforts to stem the flow of illegal drugs into the U.S. In each instance, Aries embarked a detachment of Coast Guardsmen and carried out the assignment under the operational control of the Commandant, Coast Guard District 7, based at Miami, Fla. Early in May, she entered the yard at Atlantic Dry Dock Corp., Jacksonville, Fla., for six weeks of post-shakedown repairs and modifications. Halfway through June, the guided-missile hydrofoil gunboat returned to Key West and resumed a normal schedule of duty out of her home port. Though the bulk of her operations for the rest of the year consisted of routine training, tests, and equipment calibrations and checks, Aries participated in another anti-smuggling sweep during the second week in August and visited Nassau, in the Bahamas, later that month.

Normal duty in the waters near Key West kept Aries busy for the remainder of 1983 and during the first few weeks of 1984. In February 1984, the warship expanded her sphere of operations to include the Gulf of Mexico and the east coast of Central America. Late in April, she participated in Exercise Ocean Venture 84 and, later, visited New Orleans for the World’s Fair. Aries returned to Key West for normal operations at the end of May and the beginning of June. On 11 June, however, she departed Key West for the waters around Puerto Rico to participate in the initial phase of UNITAS XXV, the 1984 edition of the annual series of multilateral exercises carried out with units of various Latin American navies. At the end of June, the guided-missile hydrofoil gunboat proceeded back to Key West to resume normal duty. In August, Aries took part in maneuvers conducted off the east coast of Central America. Back at Key West at the end of August, she began operating again on a training schedule. While in the midst of this training, Lt. Cmdr. Douglas W. Kieth assumed command of the ship on 5 October 1984. 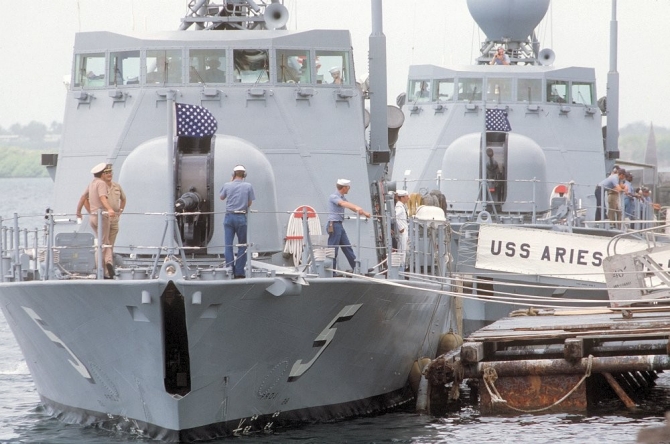 The guided-missile hydrofoil gunboat spent the rest of 1984 and the first part of 1985 engaged in operations in the immediate vicinity of Key West. In March, she traveled to Puerto Rico to participate in a readiness exercise, READEX 1-85. More duty out of her home port occupied the warship’s time in April. At the beginning of May, she voyaged to Onslow Beach, where she took part in Exercise Solid Shield 85. The middle of June found Aries in the waters near Puerto Rico again, for the initial phase of UNITAS XXVI. During July and early August, the warship carried out normal operations from her base at Key West. Her third fleet readiness exercise occupied the last half of August. In September, Aries resumed local operations from Key West and remained so occupied for the rest of 1985. 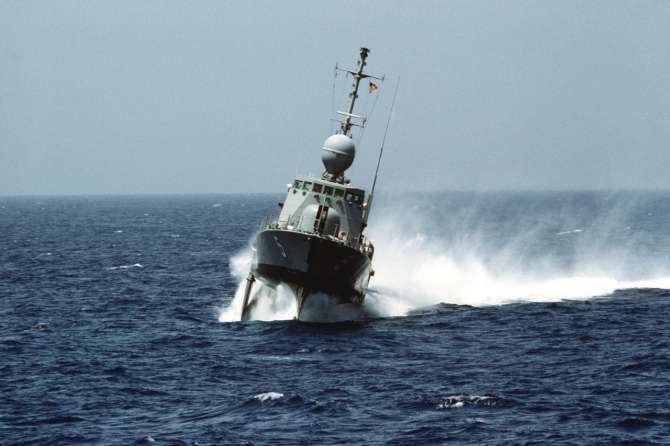 At the end of the first week in January 1986, she moved to Mayport, Fla., for a three-month availability. At the end of April, she returned to Key West whence she operated until late in July. At that time, she embarked upon a cruise that took her to the Caribbean for another UNITAS exercise during which she made port calls at La Guaira, Venezuela, and at St. Johns, Antigua. Aries returned to Key West on 14 August and carried out local training missions until mid-October. On 14 October, the guided-missile hydrofoil gunboat set out for Little Creek, Va., to participate in a special project for the Chief of Naval Operations. Over the next two months, she divided her time between her home port and operations off the Virginia capes. During these operations, Lt Cmdr. Jacob Lawrence Shuford assumed command of the ship on 29 November.  She concluded her development work on 12 December and headed back to Key West on the 16th. Aries reentered her home port on 17 December and spent the remainder of the year in that vicinity.

Between January and March of 1987, Aries spent a total of 33 days engaged in drug interdiction patrols in the Florida Straits. The patrols made use of new mission tactics that successfully combined Coast Guard, Drug Enforcement Agency and Customs operational, command and control and intelligence assets. She evaluated 1,046 surface to air contacts and conducted 20 boardings which lead to five seizures.

From 1-6 January 1988, Aries prepared for the first-ever overseas deployment of the PHM squadron as part of exercise Carib 1-88. On 21 March she stopped at Carriacou/Petite, Martinique, in order to repair a school as part of the Project Handclasp community relations special project. She also participated in two periods of joint/combined operations with the Venezuelan Navy on 14-16 and 20-21 April. The training scenarios included drug interdiction and anti-surface warfare.

From January to March 1991, Aries spent ten days on special operations in the Florida Straits. On 3 May she was grounded at Corpus Christi, Texas and remained there until the 10th. As a result, Capt. R. C. Berning assumed command of the ship from 8-13 May. He turned over command on 14 May to Lt. Cmdr. Christopher T. Nichols. Soon afterwards, she patrolled the Florida Straits for an additional twelve days of special operations. 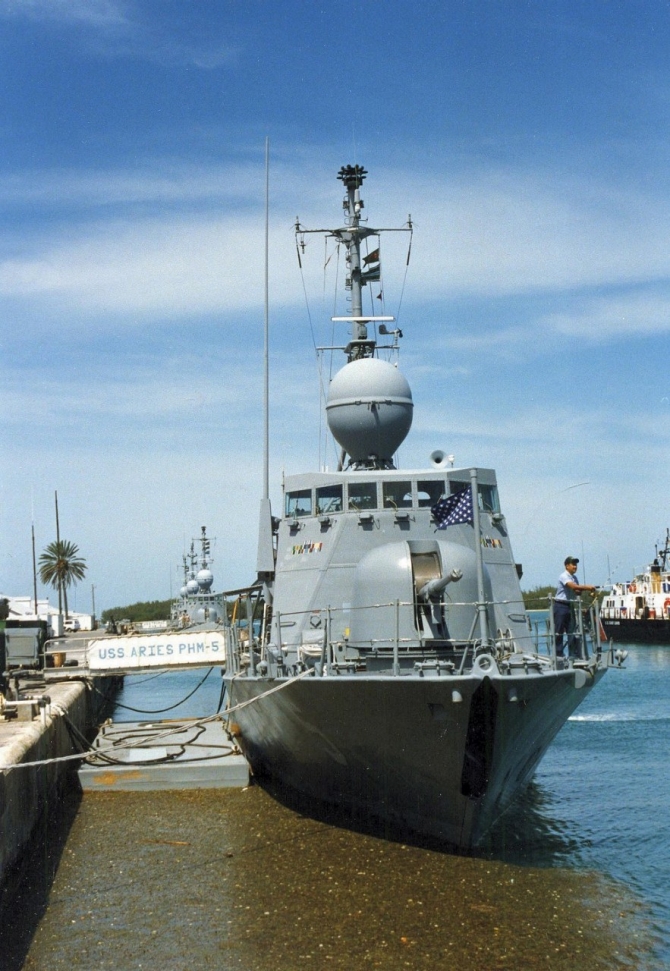 Lt Cmdr. John Wallace Riley, III, became Aries’s final commander on 15 January 1993. She was decommissioned and struck from the Naval Register on 30 July. The ship was then sold for scrap on 19 August 1996 by the Defense Reutilization and Marketing Service to Eliot James and B.J. Meinhardt and is currently undergoing restoration at Brunswick, Mo. as a museum ship.