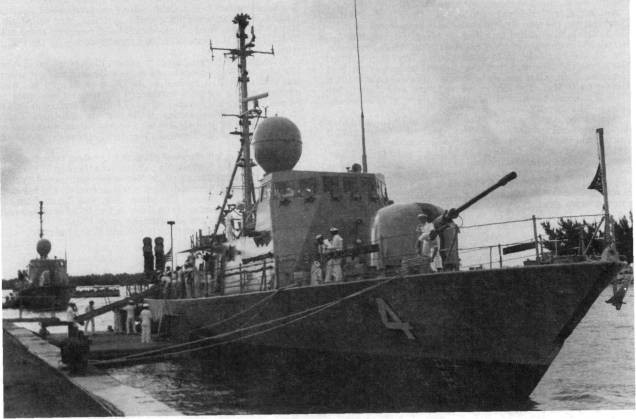 A northern constellation in the Milky Way.

After completing her fitting out, Aquila got underway from Bremerton, Wash., on 15 July in company with Taurus (PHM-3) and Frederick (LST-1184) and shaped a course for her home port, Key West, Fla. Frederick escorted the two guided-missile hydrofoil gunboats as far as Rodman in the Canal Zone where El Paso (LKA-117) took over. Aquila and her traveling companions transited the Panama Canal on 8 August and arrived in Key West three days later. The warship spent the remainder of 1982 conducting shakedown and other training out of her base at the Trumbo Point Annex, Naval Air.Station, Key West, Fla. During the first quarter of 1983, post-shakedown repairs occupied her time. That spring, Aquila embarked upon a schedule of normal training duties out of Key West that occupied her time through the summer and into the all of 1983. From 10 to 20 October, she joined Taurus and Spartanburg County (LST-1192) for special operations in the Caribbean Sea.

In mid-November, Aquila and Taurus joined Aubrey Fitch (FFG-34) at Guantanamo Bay, Cuba, to test the feasibility of operating guided-missile frigates and guided-missile hydrofoil gunboats together in the same task organization. However, demands attendant to the American presence in Grenada, where United States military forces had landed on 25 October to end the chaos caused by a power struggle between leftist factions, forestalled the experiment. Aquila, Taurus, and Aubrey Fitch headed for Grenada where they performed patrol duties and relief work until the middle of December. Aquila returned to Key West on 16 December and spent the last two weeks of the year in port.

Holiday leave and upkeep ended early in January 1984, and Aquila reembarked upon normal operations out of her base at Key West. In May, the guided-missile hydrofoil gunboat added another duty to her busy training schedule, helping the Coast Guard to interdict the traffic in illicit drugs. That fall she joined Taurus in a special mission to the Caribbean coast of Central America. The two warships returned to Key West at the end of the first week in November, and Aquila resumed her program of training missions and drug traffic interdiction. She continued so occupied through the end of 1984 and during the first half of 1985. Late in July of 1985, the warship began a restricted availability that lasted until the middle of October. Following post-overhaul trials, Aquila rejoined the effort against drug smugglers in mid-December.

Law enforcement duties occupied her during the first two months of 1986. In March, she carried out post-overhaul refresher training and, late in April, participated in FLEETEX 1-86 staged in the West Indies. Immediately thereafter, Aquila joined in another exercise, Operation "Ocean Venture 86," that simulated an attack on an enemy fleet attempting to force the Mona Passage between Hispaniola and Puerto Rico. At the beginning of the second week in May, the guided-missile hydrofoil gunboat returned to normal operations out of Key West. She interrupted those operations twice that summer, once early in July and again early in August, to conduct special tests with A-7E "Corsair" aircraft for the Chief of Naval Operations. Otherwise, she carried out normal duties from her base at Key West through the end of the year. As of the beginning of 1987, Aquila was operating out of Key West.