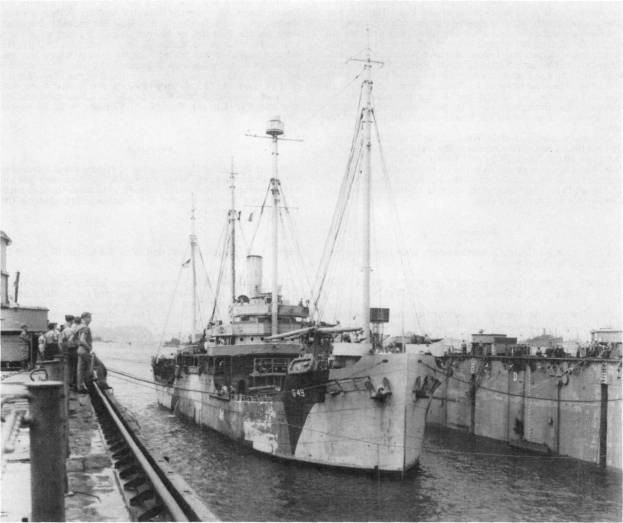 Caption: Anacapa (AG-49) enters the floating drydock ARD-13, 10 February 1945, at Ulithi, to receive repairs to her rudder and stern tube, in what appears to be rather battered pattern camouflage. Note the hinged flaps just aft of the anchor, a reminder of her previous career as a "Q-ship." (80-G-355446)

An island off the coast of California.

Anacapa was converted under a secret plan known as Project "Love William." According to this guideline, the ship would appear to be a merchant vessel while actually concealing a battery of guns capable of outfiring enemy submarines. Her original deck house was unchanged, and two more were added aft and amidships. Each housed 4-inch guns. On each side of the bow, plates were removed and replaced by flaps so that two 3-inch guns concealed below deck could train either to port or starboard. Y-guns for firing depth charges were installed out of sight and special clearance was provided in the shaft alley so that vast amounts of ammunition could be stowed, and gun crews might remain in hiding until prearranged plans sent them into action.

Although the ship was manned by Navy personnel, all members of her crew carried merchant marine papers and wore clothing typical of the merchant seamen which might be seen on board a lumber ship. Following her commissioning, Anacapa cruised off the west coast acting as a decoy to attract enemy submarine attack. In addition to this duty, she also acted as a weather station ship, an aircraft guard, a target ship, an ocean going tug, and a cargo carrier.

Anacapa ranged as far north as the Aleutians and as far south as Mexico in her attempt to draw out enemy submarines. On her southbound voyages, she would carry lumber piled high along her gunwales to give the appearance of a heavy load. When returning northward, the lumber would be removed and covered with canvas while empty oil drums were stacked flush to the rails so that observers would assume she had discharged the lumber and was heading back with a different cargo.

Her patrols passed uneventfully until 5 October 1943, when Anacapa rescued 38 survivors of the torpedoed tanker Larry Doheny off Cape Mendocino, Calif. Later that month, she was released from duty as a "Q-ship" and became a weather ship on the convoy route between San Diego and Pearl Harbor. She later carried out the same assignment in the Ellice Islands.

Anacapa was next utilized as an interisland cargo transport in the Pacific. Among her regular ports of call were Tarawa, Gilbert Islands; Saipan and Guam, Mariana Islands; Kwajalein, Eniwetok, and Majuro, Marshall Islands; Peleliu, Palau Islands; and Ulithi, Caroline Islands. This service continued through early May 1945. The ship reported to Dutch Harbor, Alaska, on 10 May and operated out of that port among the islands of the Aleutians chain through the end of the war with Japan in August. On 6 October, Anacapa set sail from Kodiak, Alaska, bound for home.

Anacapa paused at Seattle, Wash., from 13 to 18 October and then continued on to San Francisco. She was decommissioned at the Mare Island Naval Shipyard, Vallejo, Calif., on 21 March 1946. Her name was struck from the Navy list on 12 April 1946, and the vessel was transferred to the Maritime Commission on 12 August 1946. Later that year, she was refitted and saw further service as a merchant ship.