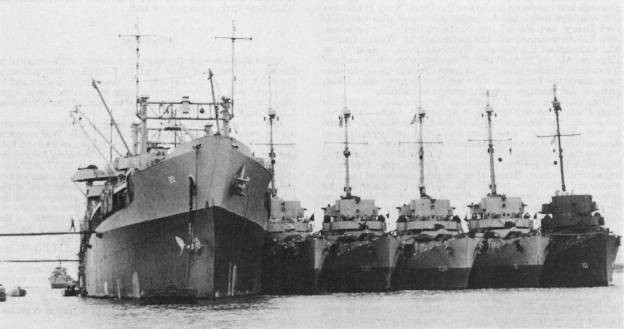 Philip Rounsevile Alger was born on 29 September 1859, in Boston, Mass. He entered the Naval Academy in 1876 and graduated four years later at the head of his class. His first cruise, in Richmond, took him to the Pacific station and to China. In 1882, Alger was ordered to the Bureau of Ordnance, Washington, D.C. This assignment exposed him for the first time to the field in which he was to later win marked distinction.

Following duty in European waters on board Pensacola from 1885 to 1889, Alger returned to the Bureau of Ordnance. On 10 November 1890, he resigned his commission as a line officer ensign to accept an appointment as a professor of mathematics with an equivalent rank of lieutenant. One year later, he was named head of the department of mechanics at the Naval Academy. In ensuing years, Alger was closely involved in the great advances made in naval ordnance which were made as the United States established its "New Navy."

In 1903, Alger accepted the position of secretary and treasurer of the United States Naval Institute, an office that entailed the editing of the institute's Proceedings. The following year, Alger was appointed to a special board to advise the Bureau of Ordnance in developing and test ordnance material.

Alger's extensive writing on ordnance included two books, Exterior Ballistics (1904) and The Elastic Strength of Guns (1906), which came to be regarded as standards in their fields. His work entitled Hydromechanics (1902) was used as a textbook at the Naval Academy and other institutions of higher learning. Alger also penned numerous articles on a wide range of technical subjects. Alger died at Annapolis, Md., on 23 February 1912.

On 30 November, the destroyer escort sailed for Bermuda and shakedown. She returned to Philadelphia for post-shakedown availability, then headed for the Caribbean on 15 January 1944, and arrived at Trinidad on 21 January. There, she was assigned to Task Group (TG) 42.5 and departed on the 31st in the screen of a convoy bound for Recife, Brazil. While en route, Alger collided with a merchantman and sustained slight damage to her bow. However, she continued on to Brazil and reached Recife on 14 February.

Upon her arrival there, the ship was assigned to TG 41.5 for patrol duty along the Brazilian coast which she carried out until 1 June. On that day, Alger departed Recife to escort a convoy to Trinidad. She reached that island on 8 June and then sailed back to Recife with another convoy.

On 17 July, Alger joined the screen of Solomons (CVE-67) and sailed for antisubmarine warfare exercises off the coast of Brazil. She then resumed patrol duty and continued that work through most of November. Alger rendezvoused at sea on the last day of the month with TG 42.3 and essorted a convoy to Rio de Janeiro.

On 28 December, the ship departed Recife to escort another convoy to Trinidad but returned to Recife on 30 January 1945. The next day, Alger was relieved of operational duties in preparation for her transfer to the government of Brazil on loan.

After various inspections and exercises at sea, Alger departed Recife on 23 February and moored that same day at Natal, Brazil. On 10 March 1945, Alger was decommissioned and loaned to the Brazilian Navy. Her name was struck from the Navy list on 20 July 1953, and title to the ship was transferred outright to the government of Brazil.