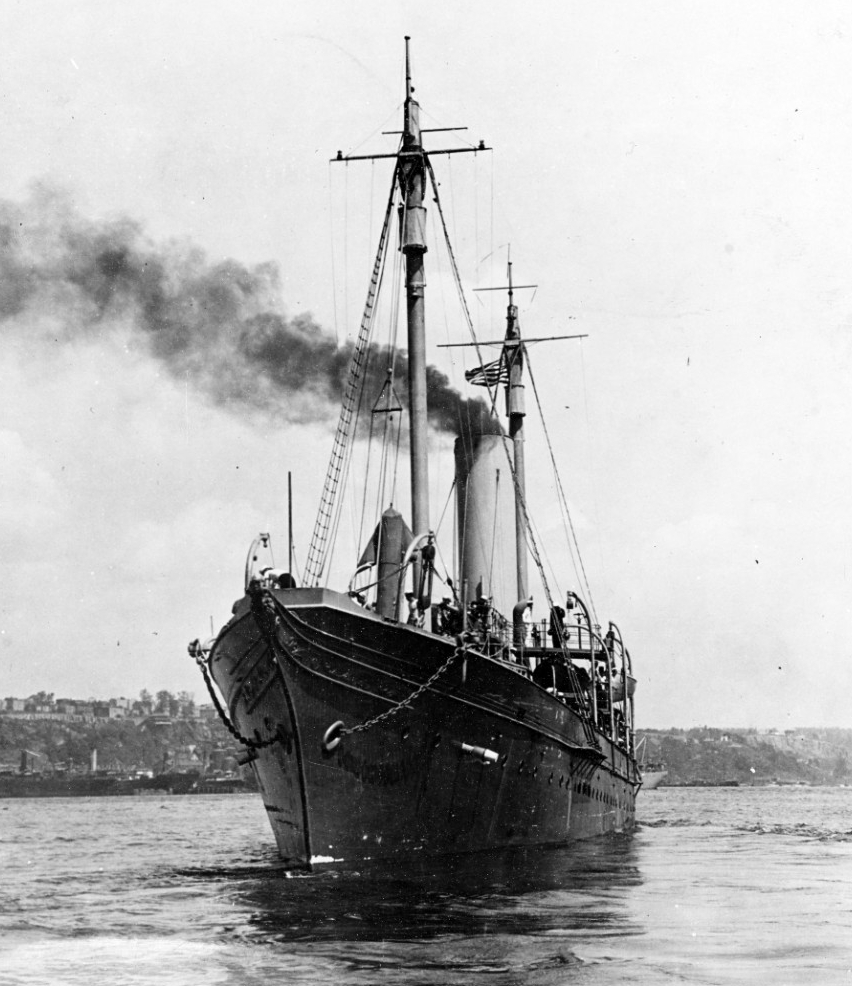 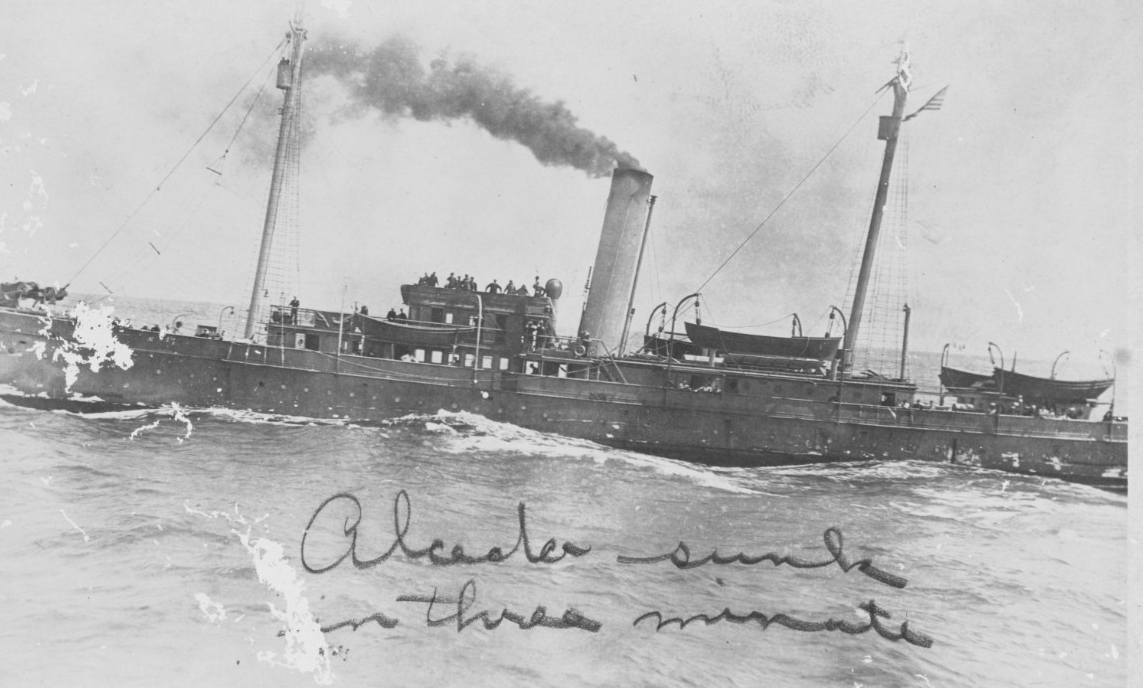 Alcedo, assigned to the Patrol Forces, departed New York on 5 August 1917 bound for Newport, R.I. and arrived the next day. Rendezvousing with the other units, the yachts Remlik (S. P. 157), Wanderer (S. P. 132), Carola IV (S. P. 812), Corona (S. P. 813), Emeline (S. P. 175), and Guinevere (S. P. 512), cleared Newport that same day, bound for distant service. The force arrived at St. Johns, Newfoundland, on 11 August and departed the next day bound for the Azores. Standing into Fayal, Azores, on the 19th, they remained until the 22nd, when they weighed anchor and set course for France. They arrived at Brest and reported for duty on 31 August. As a unit in the Second Patrol Squadron, Patrol Forces, U.S. Naval Forces Operating in European Waters, Alcedo was to conduct antisubmarine patrols and convoy escort missions along the French coast.

Alcedo, in company with Corsair (S. P. 159) and Aphrodite (S. P. 135), escorted the U.S. Army transports Montanan, Dakotan, Edward Luckenbach, and El Occidente on 21 September 1917. Two submarines were reported off Belle Ile, France, so an extra escort of four seaplanes, four little fighters, one seventy-five-foot subchaser, and a big French dirigible accompanied the convoy into the war zone. The aircraft flew over fifty miles offshore. The dirigible made the signal, “Submarine below” but the U-boat had submerged before the escorts could respond. Another dirigible came out from Brest, but soon went back. Just over a week later, on 29 September, Alcedo was again conducting a convoy escort. Noma (S. P. 131) signaled by blinker tube that the U.S. Army Chartered Transport (USACT) City of Atlanta, the last ship of the convoy, was having engine trouble and could not keep position. The transport and the escort dropped astern and disappeared in the darkness. At 3:32 a.m., Alcedo radioed Corsair, “I have been rammed by convoy. Stand by.” One of the escorted vessels, the ex-North German Lloyd steamer Willehad, was out of position and had fouled Alcedo. In spite of this, the yacht recovered, rejoined the convoy, and resumed her escort position.

Alcedo was escorting a convoy in company with Corsair and Wakiva II on 2 October 1917. Corsair received a message stating that survivors of a French fishing vessel attacked by a U-boat had been rescued, but other survivors who took to boats were still unaccounted for. The yacht signaled Alcedo and Wakiva II to continue the escort while she went in search of survivors. The fishing vessel was the bark Saint Pierre, which had been set afire by a boarding party from U-60 (Kapitänleutnant Karlgeorg Schuster commanding) 180 miles off Ushant. Alcedo and Wakiva II completed the escort into port.

On 17 October 1917, the homeward-bound USACT Antilles was two days out of Quiberon Bay, France, steaming in company with Henderson (Transport No. 1) and Willehad under escort by Alcedo and Corsair. The ships were zigzagging, with all lookouts properly kept and gunners at their stations. Antilles had her own battery which was manned by a Naval Armed Guard Detachment. At 6:45 a.m., Antilles was steaming directly astern of Corsair during one of the frequent changes of course, when she was seen to sheer out to starboard, having been torpedoed by U-105 (Kapitänleutnant Friedrich Strackerjan). Henderson hoisted a signal and Corsair swung about, sounding general quarters. With a hole into her engine room, Antilles settled by the stern and sank. Henderson immediately turned to starboard and made a smoke screen; Willehad turned to port and passed very near U-105. Alcedo turned back to the spot where Antilles sank. Corsair steamed at nineteen knots directly astern of Henderson and to the northeast, followed by Alcedo. The two escorting vessels continued in the vicinity of the wreckage until 8:30 a.m. No sign of U-105, however, was detected. During this time Alcedo picked up survivors while Corsair continued circling around the boats and wreckage. Corsair assisted in picking up the survivors in outlying boats and patrolling the vicinity and dropping depth charges until 10:30 a.m. Antilles’ sinking resulted in the loss of 70 souls, the largest American loss of life to that point in the war. Alcedo, however, rescued 117 of the crew. With Corsair hauling in 50, a total of 167 were saved. All survivors having been rescued, and it being impossible to overhaul either Henderson or Willehad before nightfall, the yachts set a course for a return to Brest.

Description: Alcedo picking up survivors in 1917, either from the steamer Antilles on 17 October 1917, or the torpedoed transport Finland on 28 October 1917. (Naval History and Heritage Command Photograph NH 41743)

That same day, Vice Adm. William S. Sims, Commander, U.S.  Naval Forces in European Waters, designated the formation of a special division of yachts. Under the command of Cmdr. Frederic N. Freeman, they were to be used primarily for escort of convoys along the French coast. The division’s constituent units included Alcedo, Aphrodite, Corsair, Wakiva II (S. P. 160), Noma, and Kanawha II (S.P. 130).

Alcedo subsequently received orders to escort a convoy, consisting of USAT Buford, USACT City of Savannah, and Finland (Id. No. 4543), which sailed from St. Nazaire, France, on 24 October 1917. Four coal-burners, Lamson (Destroyer No. 18), Flusser (Destroyer No.20), Preston (Destroyer No. 19), and Smith (Destroyer No. 17), had arrived from the Azores to reinforce the Patrol Force yachts, and were also assigned to this escort. Corsair and Wakiva II were also detailed. No previous outward-bound convoy had been so protected. Antilles’ sinking had prompted the heavy escort. Steaming out to sea, Corsair led the column, with a destroyer on each bow of Finland, Alcedo took a position to starboard of Buford, Wakiva II to port, and a destroyer was hovering on the wing of each. While underway on the 28th, Finland, with survivors of Antilles embarked, was torpedoed on her starboard side by U-93 (Kapitänleutnant Helmut Gerlach). She was damaged, but did not sink, the damage being limited to one cargo hold; her boilers and engines had been unaffected. With the Antilles survivors on board, however, lifeboats were immediately launched without orders from Cmdr. Stephen V. Graham, the ship’s commanding officer. The engine room and fire room men also all left their stations, contrary to orders. The naval officers on board, armed with a revolver and a wooden mallet, were able to get the men back to their stations and, although Finland took a starboard list, Graham was able to steer a course back to Brest. She anchored the next morning having been escorted into port by Corsair and Smith. She would later go into drydock to be repaired. Crewmembers on board the prematurely launched lifeboats were rounded up by Alcedo, who took in 85, and Wakiva II. Having recovered all those in the boats, both returned to Brest.

On the afternoon of 4 November 1917, Alcedo departed Quiberon Bay, France, with Aphrodite, Noma, and Kanawha II, as the escort for a convoy composed of the transports Florence Luckenbach (Id. No. 1606) and USAT Artemis and the Navy cargo ship Newport News (ex-German ship Odenwald) bound for Brest. Proceeding on the starboard flank of the convoy around 1:45 a.m. on 5 November, some 75 miles west of Belle Ile, Alcedo reported sighting a surfaced U-boat about three hundred yards on the port bow. Almost instantaneously with the sounding of the alarm, the German submarine UC-71 (Oberleutnant zur See Ernst Steindorff), fired a single torpedo in a surface attack (confirmed by German records of the attack). Alcedo turned with full right-rudder attempting to change course in order to evade the torpedo, but she sluggishly answered her helm. The torpedo struck the yacht on the port side well forward, and Alcedo began to settle fast. Soon after the hit, Lt. Cmdr. Conn, the ship’s commanding officer ordered her abandoned; and she went down in eight minutes. The yacht lost one officer and 20 Sailors in the action. The survivors, three officers and twenty-five crew put off in two dories. After a long time rowing, one group, which included Lt. Cmdr. Conn, was picked up by the French torpedo boat No. 275 and were taken into Brest. The other boat was towed to safety by French fishermen to Pointe de Penmarch, France.

“In the name of the entire personnel of the patrol squadrons of the Channel, I seek to express to you the regret which we feel on account of the loss of that good patrol ship the Alcedo and our brave comrades who have disappeared with that ship. They have joined in the struggle which we are waging together for the victory of right and humanity and their deaths will go far toward drawing closer the bonds which unite our two naval forces. We shall cherish their memory and shall strive to avenge them. Please accept my dear Admiral, my sympathy and my most cordial good wishes.”

The loss of Alcedo prompted the convening of a court of inquiry at the order of Rear Adm. Wilson. At issue was the occupation of officer billets on the yachts deployed to European waters by naval reservists. The opinion of the court, endorsed by Vice Adm. Sims, was that at least two additional officers on each of the converted yachts should be regular Navy officers.

Alcedo was stricken from the Navy list on 17 December 1917.