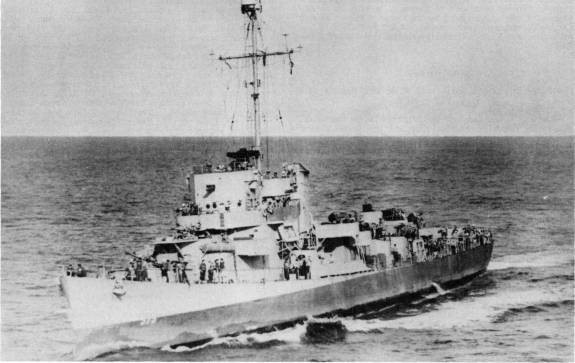 Edward Henry Ahrens, born on 4 November 1919 in Dayton, Ky., enlisted in the Marine Corps on 3 February 1942 at Cincinnati, Ohio, and underwent boot camp training at the Marine Corps Recruit Depot, Parris Island, S.C. He transferred to the Marine Barracks, Quantico, Va., on 16 March 1942.

Assigned to Company "A", 1st Raider Battalion, Fleet Marine Force, soon thereafter, Ahrens landed with that unit from Little (APD-4) at Tulagi, Guadalcanal, British Solomon Islands, in the second assault wave on 7 August 1942. With Company "C", 1st Raider Battalion, securing the right flank on the beachhead, Company "A" moved inland and down the right slope of Tulagi's central ridge. Initially, the Marines were not opposed.

That evening, Company "A" took positions for the night west of a cricket ground on the island, as part of the defensive line extending along the ridge. The Japanese later launched a fierce nocturnal counterattack which drove a wedge between the two Raider companies. Isolating the latter near the beachhead, the enemy concentrated his efforts on Company "A" in an attempt to sweep up the ridge toward the residency, a former British government building serving as a Raider battalion command post. The Raiders, however, stood firm.

During the savage battle that ensued, Ahrens, in a security detachment assigned the task of protecting the Raiders' right flank, singlehandedly engaged a group of Japanese in hand-to-hand combat as they attempted to infiltrate the Raiders' rear. Although painfully wounded in the groin, the gallant young Marine killed at least three Japanese (including the attacking unit's senior officer) and aided materially in stopping their infiltration.

For his part in stopping the enemy, Ahrens, who died of his wounds on 8 August, was posthumously awarded a Navy Cross as well as a share of the Presidential Unit Citation earned by the 1st Marine Division.

Late in February, Ahrens proceeded to Bermuda for shakedown training. In early April, she sailed to Casco Bay, Maine, for additional training. On the 22d at Norfolk, Va., the destroyer escort joined Task Group (TG) 21.11, a hunter/killer group, built around escort carrier Block Island (CVE-21), which was operating in the Atlantic and Caribbean. On 29 May, a German U-boat torpedoed and sank Block Island (CVE-21) and Barr (DE-576). Ahrens rescued 673 officers and men in a period of 40 minutes. While carrying out rescue operations, the ship assisted Eugene E. Elmore (DE-686) in locating [7-5-49]. Eugene E. Elmore made two hedgehog attacks which sank the German submarine.

Following repairs at the New York Navy Yard, the destroyer escort carried out training exercises at Casco Bay and Norfolk, Va. On 23 July, Ahrens assumed duty as an escort for transatlantic convoys. The highlight of this period came on 13 October after a merchant ship collided with a gasoline tanker, starting large fires on both ships. Following her rescue of survivors, Ahrens and Holton (DE-703) succeeded in putting out the fires.

On 15 December, Ahrens sailed with TG 27.7 to join the 7th Fleet in the Pacific. She proceeded to Manus, Admiralty Islands, via the Panama Canal. On 23 January 1945, the destroyer escort touched at Manus. She continued on to Leyte, Philippines, arriving there on 9 February. The vessel was then attached to TG 75.2 to serve as an ocean escort for the Philippine Sea Frontier.

Ahrens escorted merchant and naval convoys until 25 August 1945, During this period, she operated between such points as Hollandia, New Guinea; Manila and Subic Bay, Philippines; Kossol Roads, Palau Islands; Ulithi; and Okinawa.

The ship began her long voyage back to the United States on 5 November and stopped at Pearl Harbor; San Diego, Calif.; and the Panama Canal Zone before finally reaching Boston, Mass., on 15 December. She then commenced preinactivation overhaul and sailed to Green Cove Springs, Fla., in early 1946. Ahrens was decommissioned there.